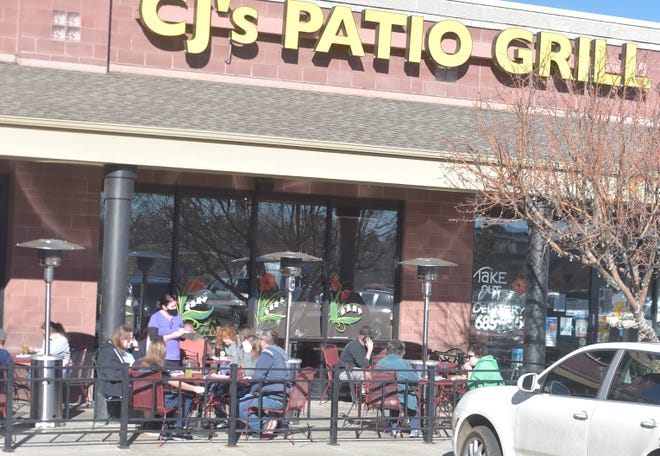 More than 75 business owners in Loveland signed a letter vowing to defy the Safer at Home Level Red restrictions that went into effect this week in Larimer County to slow the spread of the novel coronavirus that causes COVID-19.

Businesses that actually follow through with those plans could face penalties from the state, including the loss of their licenses to operate, Gov. Jared Polis said in a news conference Tuesday.

The Level Red restrictions, which took effect at 5 p.m. Tuesday in Larimer County, ban indoor dining at restaurants, all indoor entertainment events and all personal gatherings among people from different households; and severely limit capacity at churches, gyms and most other businesses.

So far, it’s not clear how many businesses defied the order or if any health department action has been taken against those who did.

The new restrictions will lead to many restaurants, breweries and other small businesses in the county laying off employees, and some are not sure they’ll be able to survive another shutdown after closing their doors from mid-March through the end of May in the state’s first effort to slow the spread of the COVID-19.

“We are not closing our doors. We are not laying off our staff,” said Morgen Harrington, a co-owner of Grimm Brothers Brewhouse. “We are going to continue our quiet protest until we can come up with a better solution to this problem.

“I’m willing to lose my business license over losing my staff again, right before the holidays. But I also can’t pay them if we can’t stay open.”

In the letter sent to state and county officials and signed by 78 Loveland business owners, they said the new restrictions were not warranted by COVID-19 case numbers in Larimer County, saying the county’s fatality rate from the disease was 0.88% compared with a national average of 2.16%. They argue that the numbers on the county’s COVID-19 dashboard “are misleading and used to further the case for closures that are not warranted.”

There is no evidence, they said, that operating their businesses as they have been under the Safer at Home Level Yellow guidelines has led to the recent surge in COVID-19 cases. Larimer County reported 208 new cases Tuesday and more than 180 daily for the past two weeks after reporting an average of 55 per day in October and 27 a day in September.

Colorado Department of Public Health and Environment guidelines call for Level Red restrictions in counties that have an incidence rate of COVID-19 of 350 or more per 100,000 people in a two-week period, a positivity rate among those tested of 15% or more over the previous 14 days and hospitalization rates that are increasing compared with the previous 14-day period.

Larimer County reported an incidence rate Wednesday of 914 per 100,000 people over the past 14 days after reaching an all-time high of 959 on Monday, a positivity rate Monday over the past 14 days of 12.3% and 112 patients being treated for COVID-19 at its UCHealth and Banner hospitals, nearly double the 57 that were reported two weeks earlier.

“Hospital capacity is shrinking, and we must work to ensure they have the ability to provide care to those who need it,” the Colorado Department of Public Health and Environment said Wednesday night in an email to the Coloradoan.

Larimer County had been operating under Level Yellow on the state’s COVID-19 dial until Tuesday, when it bypassed Level Orange and went straight to Level Red.

County health director Tom Gonzales said the state had already notified the county it would need to move to Level Red by the end of this week, so there was no point going to Level Orange for only a few days and creating additional confusion about what was and was not allowed.

But on Wednesday, not all of the businesses had chosen to defy the order.

Mike Severance, who owns Cactus Grille in downtown Loveland, said he signed the letter in “solidarity” with the other business owners but doesn’t necessarily plan to defy the new restrictions. His restaurant, which he has operated for 32 years, was open only for takeout and delivery Wednesday, as permitted under Level Red restrictions.

He doesn’t believe the state or county have the authority to enforce the restrictions they have been imposing but also isn’t sure he’s willing to fight that battle and risk losing his business license for 30, 60, 90 days or more.

Katie O’Donnell, a spokeswoman for the Larimer County health department, said the state “has been pretty clear with the counties, as a whole, that they will step in and pull licenses” if businesses violate the new restrictions. The county has been working closely with local businesses throughout the pandemic to help them stay open as much as possible while limiting the risk of the virus spreading among customers and employees.

The Loveland business owners “escalated” their grievances to the state level, she said, when they held a news conference Tuesday announcing their plans to defy the Level Red restrictions and continue operating under the Level Yellow guidelines.

“If the state pulls a license, we can’t step into that,” O’Donnell said. “If we move out of red, which is our hope, as soon as possible, these guys are going to remain closed if the state steps in and pulls their licenses. I know they’re frustrated, and we totally get it. We want to get out of red and get reopened as fast as possible. Once we see our cases start to come back down, we can apply for the Orange Level.”

The state health department said in its email that it “urges businesses to comply with the public health order and that enforcement usually starts at the county level.

“But CDPHE can issue cease and desist orders, which if defied, can carry court sanctions. The state can also temporarily suspend a business license if the business is not in compliance with state laws.”

Severance, the owner of Cactus Grille, said he understands how serious the virus is and the importance of controlling its spread. He just doesn’t believe the once-size-fits-all restrictions Level Red places on businesses is the right approach, given what we now know about COVID-19.

Those who are most vulnerable, he said, should do what they can to keep themselves safe. And others should be able to decide for themselves what level of contact they are comfortable having with others and what businesses they want to patronize.

“I don’t think anybody wants to downplay the seriousness of this disease on certain people and the danger for certain people,” Severance said. “But at 99.9% recovery, it’s not that dangerous for most of us.”

He pointed out that NFL players who test positive for COVID-19 are sitting out a game or two and then returning to play and that everyone he knows who has contracted the virus has recovered.

Shutting down indoor dining again, as he did in the spring, will force him and his daughters – who run two other Loveland restaurants, Hogfish Seafood and Steakhouse and Wicked Tequila Room – to once again lay off some of their combined 60 or so employees.

“And there’s no safety net for them this time,” he said. “There’s no PPP (Paycheck Protection Program); there’s nothing. Our employees are going on unemployment again, and there’s no $600 a week for them now.”

Fadil Astafaj, owner of CJ’s Patio Grill, said he agreed with the principle of the letter when he signed it, but he did not consider it a public vow to defy the new restrictions. He said he was told the letter would go to state and county officials urging them to reconsider the move and did not realize it would be made public, with him as a signatory.

CJ’s was serving customers in its outdoor patio area Wednesday afternoon but not allowing customers, even those waiting for pickup orders, into the indoor dining area, where chairs were stacked on closed tables.

“I did not want CJ’s Patio Grill to be defiant, that we are going to fight against this,” Astafaj said. “We are going to follow the rules. We have never not followed the rules, especially right now. Things are not very good out there, and I don’t want to rock the boat. I think it’s very important we take people’s health seriously. These are our customers, and they are how we make a living.”

Contact Coloradoan reporter Kelly Lyell at kellylyell@coloradoan.com, follow him on Twitter @KellyLyell and find him on Facebook at www.facebook.com/KellyLyell.news. Support his work and that of other Coloradoan journalists by purchasing a digital subscription today.