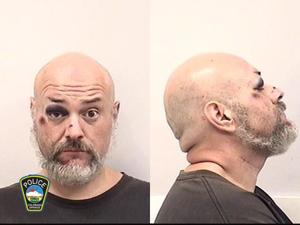 A man who Colorado Springs police say started a small fire inside a downtown senior housing center was arrested Wednesday afternoon at a nearby fast-food restaurant, police said.

About 3 p.m., police said they arrived to assist Colorado Springs firefighters at 104 E. Platte Avenue, where a small fire inside a hallway at the Acacia Senior Center had been quickly extinguished. The suspect, 41-year-old Javier Abeyta, was found leaving a nearby Carl’s Jr. restaurant at 306 N. Nevada Avenue, police said.

As Abeyta attempted to run, police said he struck one of the officers attempting to take him into custody. Abeyta was tased, police said, and arrested on suspicion of arson, resisting arrest and assault on a peace officer.

The damage to the senior center was minimal, and no injuries were reported, police said.