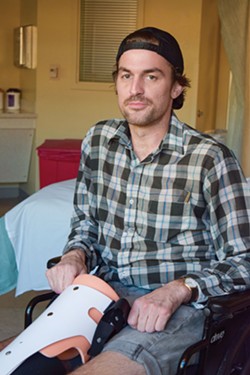 Nick Noland woke up in the back of his SUV on Oct. 22. He’d spent the night camped in a parking lot near the Mount Shavano trailhead leading to its summit. The 34-year-old stepped out to powder blue skies and sunshine — perfect conditions for his planned hike in Chaffee County.

Knowing the ascent of the 14,231-foot peak was about 4.7 miles each way, Noland took his time departing camp, realizing he’d likely be reaching the top of the mountain around sunset and make his return trip in the dead of night.

As an avid outdoorsman who has summited a handful of Colorado fourteeners and once hiked the Appalachian Trail, Noland was unconcerned about his late start at about 11 a.m.

As an added precaution, he made sure to bring plenty of food, water, first-aid equipment and warm clothing, and stocked his pack with headlamps to guide his return trip in the dark.

Little did he know that it would be another 18 hours before he’d see his camp again, and not before the mountain exacted a terrible toll.

His ascent had been without incident, but once he passed timberline, Noland arrived at a junction between the Colorado Trail and a newer trail leading to the mountain’s summit.

Wanting to expedite his trip, Noland set down his pack at the junction, intending to pick it up on his way back down.

About seven hours after his leisurely departure from camp, Noland reached Shavano’s summit and stopped to snap pictures of the Rocky Mountain sunset.

Once the sun began its descent and frigid winds nearly blew him over, Noland decided that instead of taking the Colorado Trail to camp, he would try the new trail as a more direct route to his pack.

“I decided to just sort of scamper up to the top, catch the sunset and then shortcut my way back down,” Noland says.

Looking back on the shortcut, he thinks he made a slight misjudgment.

“It was dark, there was snow coating everything, I couldn’t see any tracks, so I was just sort of navigating by sight,” Noland says. “And I think if I would’ve walked another 20 seconds to my right, I would have had a better gaze on where I should have gone.”

After walking for over an hour without any sight of his pack, Noland began to realize he was likely lost.

He called his father, who notified search and rescue personnel that his son had gone off the trail in the San Isabel National Forest.

Shortly thereafter, Noland — whose phone battery was quickly dying — received a call from search and rescue. He told them of his predicament and sent them a screenshot of his current GPS coordinates.

“And he said, ‘Well, we just need you to stay put. We can’t find you if you’re moving,” Noland recalls.

He attempted to heed their advice, ducking between two boulders to try and escape the frigid winds. But it continued to get darker, and the wind continued to blow.

Noland began to feel himself getting dangerously cold.

“I texted [search and rescue] ‘ETA?’ and he said, ‘Three to six hours,’” Noland recalls.

“I didn’t think I could wait three to six hours, and certainly not six, because I knew it would just be getting colder up there. And that scared me more than anything — being at that high of an elevation and not having the right equipment to survive. Which I did, it was just lost.”

Noland could feel his feet freezing, and loosened his shoelaces to try to increase circulation, his ungloved hands were so numb he couldn’t even grip the zipper of his jacket.

At one point, he looked down and was shocked to find one of his shoes had fallen off. It had likely lodged between two boulders over which he’d climbed or was stuck in a half-foot snow bank somewhere along the way.

What he found most alarming was that he felt no difference between the shoeless foot and its counterpart.

After continuing downward, running on pure adrenaline and determination, he looked down once more to see his second shoe had disappeared.

He continued on wearing little more than his socks and lightweight running apparel.

“I was in survival mode at that point,” Noland says. “I just wanted to get down.”

Noland continued downhill and eventually stumbled across a massive fallen pine tree. He laid down in the crater caused by the tree’s uprooting, pondering whether to try and take shelter from the elements until morning or continue onward.

Suddenly a thought crossed his mind: Had he just stepping willingly into his own unmarked grave?

He soon felt a surge of energy that seemingly came from outside of him, he said.

“I got out of the hole with just a passion to live,” Noland says.

“The only word I know to describe it is ‘God.’ It’s the greatest energy I can imagine ever encountering, and it stuck with me and it came with me off the mountain.”

Noland continued on and finally stumbled upon the Colorado Trail around 5 a.m.

He soon saw headlamps he thought belonged to search and rescue teams, but were actually those of elk hunters scouting for an early morning hunt.

When the hunters shined their headlamps down at Noland’s feet, he saw that the trip down the mountain had shredded both pairs of his socks into ribbons — his feet were now bare, and part of his heel on one foot was dragging behind him on the ground, the flesh too frozen even to bleed.

“I can only imagine what those elk hunters thought about this dude coming out of the darkness at 5 a.m. off a fourteener with no shoes on screaming for help,” Noland says.

“And, at the same time, I was jubilant.”

Noland was able to make it back to his SUV, charge his phone and inform search and rescue teams — who’d called off their search around 4 a.m. after seeing no sign of him — he’d made it back to the trailhead.

An ambulance was dispatched to meet him at the trailhead, but when paramedics arrived, he could not take a single step — and never again would on his own two feet.

“One of the EMTs described my foot as being de-gloved,” Noland says. “I had three black toes and everything else was kind of a purply-red.”

Noland was first brought to a hospital in Salida, but because of his extensive injuries, required a transfer to a burn and freeze unit at a hospital in Aurora where he was scheduled to undergo surgery to remove the dead tissue.

The night before the surgery, he experienced the most excruciating pain of his life, which he later realized was the sensation of his feet slowly dying. And when he awoke from surgery the following day and looked down, he saw that doctors had been forced to remove both of his feet.

In the weeks since the surgery — as well as a second procedure needed to remove additional dead tissue — Noland has been slowly recovering and has taken time to reflect deeply on his harrowing ordeal.

Despite feeling guilty about putting himself at risk and mourning the loss of his feet, Noland wants to use his experience not only as a warning to others against taking shortcuts and unnecessary risks while enjoying the outdoors, but also to better appreciate life — something he nearly lost.

Noland said he knows he made mistakes that day. Like he probably should have done more planning, shouldn’t have dropped his pack, and shouldn’t have taken the shortcut that led him astray from the trail.

But it’s not the mistakes he regrets — it’s the moments in which he did not appreciate his life before it was nearly stolen by the elements, he says.

“It’s taught me to pay attention; to savor it and soak it up; to speak more kindly and more patiently … to step off the cliff and depend on the people around you to catch you. That’s the lesson that I’m still learning. There’s no time to waste.”