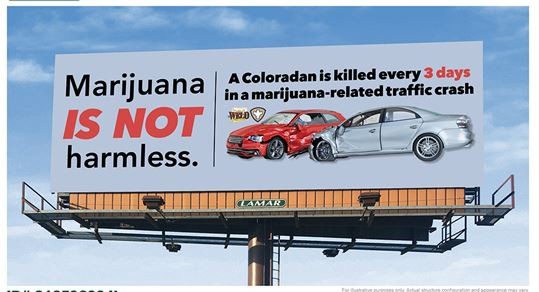 While Colorado may have earned a national reputation as a pot-embracing state, not everyone here is on board with that — and Weld County, for one, has chosen to broadcast its anti-weed message from highway billboards.

On Dec. 26, the Weld County Health Department announced a new campaign titled “Marijuana is Not Harmless” featuring social media posts and billboards advertising that “A Coloradan is killed every 3 days in a marijuana-related traffic crash” and “users report lower satisfaction of life and poorer mental and physical health.” But some people are questioning the accuracy of the messaging.

Marijuana Industry Group, a marijuana trade group in Colorado, released a statement Dec. 27 saying it was “disappointed by some of the facts being used to promote” the campaign.

As sources for the campaign material, Weld County cites a webpage for the National Institute on Drug Abuse, a research institute run by the federal government, and a report from the Rocky Mountain High Intensity Drug Trafficking Area (RMHIDTA), a federally funded task force that tracks the impact of marijuana legalization in Colorado.

The formerly mentioned webpage includes this blurb that’s presumably a source for the billboard about lower satisfaction and poorer health:

Compared to those who don’t use marijuana, those who frequently use large amounts report the following:

The National Institute on Drug Abuse doesn’t provide a citation for this statement on the webpage Weld County cites, but it’s probably referring to a 2008 study in New Zealand.

Meanwhile, the message that one “Coloradan is killed every three days in a marijuana-related traffic incident” appears to come from the RMHIDTA report, which says that in 2018, there were 115 “marijuana-related” traffic fatalities in the state, where the driver tested positive for marijuana.

It’s much more difficult, though, to pinpoint whether a driver is high than whether they are drunk. THC, the psychoactive component of marijuana, can show up in a blood test days or weeks after someone ingests the substance.

In its report, RMHIDTA states out of the 109 drivers in fatal crashes who tested positive for marijuana, just 25 percent tested positive for only marijuana (i.e., they hadn’t consumed alcohol or other substances as well). And only about a third of the 109 drivers had levels of THC above five nanograms per milliliter of blood, the “permissible inference” level above which a driver can get a DUI.

“Quite frankly, there are a lot of facts, data and other information available from government agencies like the Colorado Department of Public Health and Environment and the Colorado Department of Public Safety that are not consistent with the picture painted by the data being used in this educational campaign,” Ron Kammerzell, interim executive director of Marijuana Industry Group, said in the group’s statement.

In its statement announcing the campaign, Weld County notes Colorado has “over 520 recreational marijuana dispensaries, which is more than twice the number of statewide Starbucks.”

“We acknowledge Colorado voters legalized recreational marijuana,” Dr. Mark E. Wallace executive director of the Weld County Health Department, said in the statement announcing the campaign. “However, the general public, and especially youth, need to understand that marijuana use is not harmless. There are consequences to driving impaired and using frequent amounts of marijuana.”