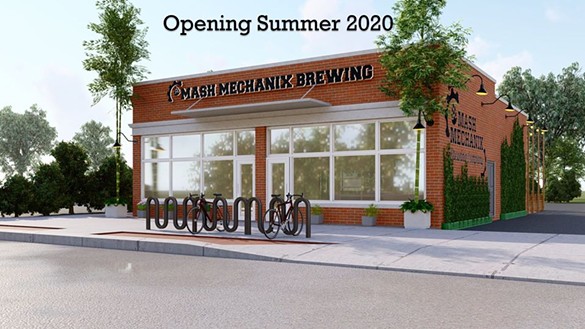 Breweries are taking as much of a battering as restaurants and bars due to the COVID-19 pandemic, with some beginning to fold under pressure. Locally, our scene lost Iron Bird Brewing this past week.

And yet with all the gloomy news, some entities are moving forward as confidently as possible with their plans to stay alive and thrive. And we’ve just learned of a new brewery that plans to open in the in mid-July tentatively.

Meet Mash Mechanix Brewing, to be located at 429 E. Pikes Peak Ave. (diagonally across the street from 1350 Distilling) in a renovated, 100-plus-year-old building that’s been everything from a turn-of-the-20th-century dairy to a church, tattoo studio and scooter shop in more recent years.

The co-founders behind it are: Leif Anderson, also the brewmaster and a D-11 middle school science teacher by day; Ryan Close, who also works in IT; and Kevin Olsen, the “construction manager extraordinaire” of the project. Anderson and Close have been pals since grade school, who “grew up gear-heads, always fixing things, making them better and building our own stuff,” says Anderson. Hence the name Mash Mechanix, to pay homage to motorhead culture.

Here, that means building out some of their own custom equipment — such as tap handles from old Nascar engine parts — as well as developing their own recipes of standard styles. Anderson has won numerous awards at regional homebrewing competitions in the eight years he’s been making beer. “I will brew anything,” he says. “I enjoy making everything, mastering a style and moving on.”

Anderson says they’re also focusing a lot of attention on rehabilitating the building, “bringing it back to its original splendor inside.” He says they’ve been able to repurpose many materials, including church pews from a defunct church in Denver’s Washington Park area as well as wood (to be used for tables) from a former bowling alley in Fountain.

Mash Mechanix will be brewing on a 3-barrel system and plans to open with 16 taps: 13 devoted to house beers; one for root beer, another for just CO2 for growler fills (they’ll also sell crowlers); and the third for cold water for non-drinkers.

Anderson says he’s not planning to define flagships out of the gate, but rather wants guests to pick favorites from a rotating list of beers he’ll brew. “We’ll open with what we like,” he says, “with a broad offering, and rotate taps quickly to feel out our customers … our focus will be a brew for everyone here… everything from lagers to ales.”

Also look for regular food truck service on site. “We’re excellent cooks, but we’d rather make beer,” jokes Anderson, who says he’s focusing on the silver lining when it comes to the timing of opening amidst the COVID-19 pandemic: “It’s unfortunate, but it’s given us the time to really focus on opening correctly,” he says.