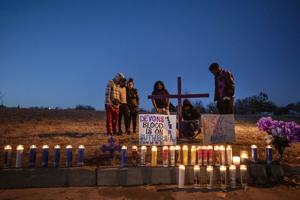 The memorial — spray-painted homages, candles and crosses — had been along Preuss Road on the southern edge of Adams Park east of Prospect Lake since Aug. 3, when De’Von Bailey was shot four times in the back and arm as he ran from two officers.

The officers, later identified as Alan Van’t Land and Blake Evenson, were investigating a report of an armed robbery in the area and had stopped Bailey and his cousin, Lawrence Stoker, because they matched the description of the suspects.

Body-camera and surveillance video of the confrontation showed Bailey turn and run when one of the officers went to search him. After shouting several times for Bailey to raise his hands, officers opened fire at his back.

A handgun was found in Bailey’s pocket as he lay on the ground fatally wounded and handcuffed, body-cam video showed.

At the park where Bailey was shot, people spray-painted “Long live De’Von” and “DB Zone” on the street and sidewalk. The graffiti, candles and crosses had been hurriedly replaced after city code enforcement officers removed the memorial hours earlier.

Scene outside Adam’s Park in Colorado Springs this evening where dozens gathered to repaint the streets for De’Von Bailey. A memorial for the teen was taken down earlier today by city code enforcement, police say. More to come @csgazette pic.twitter.com/0ZQ7R4Fldf

“It’s devastating” said a friend of Bailey, who declined to give his name. “We never see other memorials taken down. … It’s the memory for us. We don’t have anywhere else to (visit) him.”

Bailey’s mother posted a video on Facebook in which she called the city’s removal of the memorial disrespectful.

“The memorial wasn’t bothering anybody,” Delisha Searcy said in the video. “The community is still healing from them letting the officers get away with murder. And you disrespect us by going to clean it up. Not even giving a warning … all I can say is it’s hurtful because it’s like a constant slap in the face every day about the whole situation.”

Police spokesman Lt. James Sokolik said the memorial was removed because of “numerous complaints” from nearby residents about alcohol and marijuana being left at the memorial.

That was disputed by some of the people replacing the memorial.

Another friend of Bailey who knew him through school said he drives past the park every day and has only seen the candles and crosses.

After the shooting and release of the videos, demonstrations and marches were held at which police were accused of brutality and racism.

Tension between police and the community that had simmered in the past four months was reignited in November, when a grand jury unanimously found the two officers involved justified in the killing.

The grand jury’s decision was largely based on the officers’ claim that they believed Bailey was going for a gun as he ran and fired in self-defense, according to court documents.

A week after the grand jury declined to indict the officers, a jury acquitted Bailey’s cousin, Stoker, who had been charged with two counts of third-degree assault and one count of harassment, capping a three-day trial.

Afterward, jurors said they had doubts about the credibility of the man who’s 911 call reportng the robbery led to the fatal shooting at Adams Park.

Click here for The Gazette’s full coverage of the officer-involved shooting.