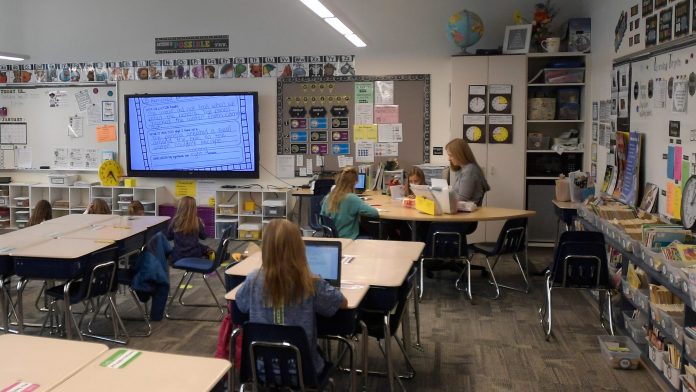 Democratic lawmakers are asking the Colorado Supreme Court to decide whether a proposed tax change that could generate millions for K-12 education is constitutional.

This proposal would gradually increase local school district property taxes without a vote under the premise that voters a generation ago agreed to higher rates and that state officials improperly lowered them.

On Friday, after giving initial approval to a bill to phase in higher local tax rates over 19 years, senators took the unusual step of sending what’s called an interrogatory seeking the opinion of the state’s highest court. Republicans Sen. Kevin Priola of Brighton and Bob Rankin of Carbondale joined Democrats in what was otherwise a party-line vote on the resolution.

Supporters hope to get a clear answer before the end of the legislative session and include the prospect of additional revenue in the 2021-22 budget. New local taxes would generate more than $90 million next year and could bring in the equivalent of around $288 million a year when they’re fully implemented.

Supporters believe previous case law indicates the court would agree with their interpretation. Legal experts have said the decision could go either way.

If the court agrees the proposed change is constitutional, it could help solve a long-standing problem in Colorado school funding, shifting some of the burden of paying for K-12 education from the state to local taxpayers, reducing wide differences in tax rates between districts and increasing total education funding.

If the court says the legislature cannot raise local taxes without a vote, advocates of tax reform will face a much harder path. A previous idea called for the state to withhold state funding from districts where voters don’t agree to raise taxes, an even more politically challenging proposition.

But the court is not required to take up the question and could send it back to the legislature. If that happens, Democrats could still move forward with the bill, but school districts would have more uncertainty and might not feel safe spending the extra money.

Absent a decision, raising taxes without a vote would likely generate lawsuits that would ultimately send the case back to the high court. If those challenges are successful, districts might have to return the new money.

The state and school districts share the cost of K-12 education, with the state picking up whatever local taxes don’t cover. When voters adopted TABOR in 1992, the average school district collected 38 mills in property tax, and districts covered two-thirds of the cost of education. A mill represents $1 for every $1,000 of taxable value.

Today, the average is 19 mills, with a cap at 27 mills, and the state picks up two-thirds of the $7.2 billion cost of K-12 education. Meanwhile, tax rates have little relationship to property wealth. In some cases, poor districts pay higher tax rates and a larger share of school costs than do wealthier districts, even as the state cannot keep up with constitutional spending requirements.

One provision of TABOR pushed down local tax rates when property values went up to prevent revenue from increasing too much. In most Colorado districts, voters agreed to hold tax rates steady rather than see funding continue to decline, but state education officials, following their own interpretation of the law, continued to reduce tax rates.

Supporters of the change say they’re correcting a historical mistake. The bill would gradually increase local tax rates until they reach the point at which past voters decided to hold them steady.

“We used to have relative consistency across districts when it comes to mill levies, and now it is all over the place,” said Senate Majority Leader Stephen Fenberg, a Boulder Democrat. “It is a patchwork. This is something that needs to be corrected for a fairer and more equitable system of funding education across our state.”

Republicans object on two accounts. They believe the bill is unconstitutional because the plain language of the Taxpayer’s Bill of Rights always requires a vote to increase taxes.

They also argue that increased funding should be contingent on larger changes to how money gets shared among districts.

There is broad agreement that Colorado’s funding formula is unfair and gives more weight to factors like district size and cost of living than to whether students live in poverty or are learning English or have a learning disability. But efforts to change the formula have foundered because no district wants to get less than they get now.

Democrats say it will be easier to talk about changing the formula once Colorado adequately funds its schools, but state Sen. Paul Lundeen, a Monument Republican, said the mill levy change represents a lost opportunity to have a larger conversation.

“This bill at its heart is an effort to protect a system and resist changes that are so necessary for our students,” he said. “Does this bill do anything about the disequity in our funding formula? Does it do anything for our at-risk students? For our special needs students? That will not happen if we do not strike a grand bargain that brings the students into the conversation in a way this bill does not.”