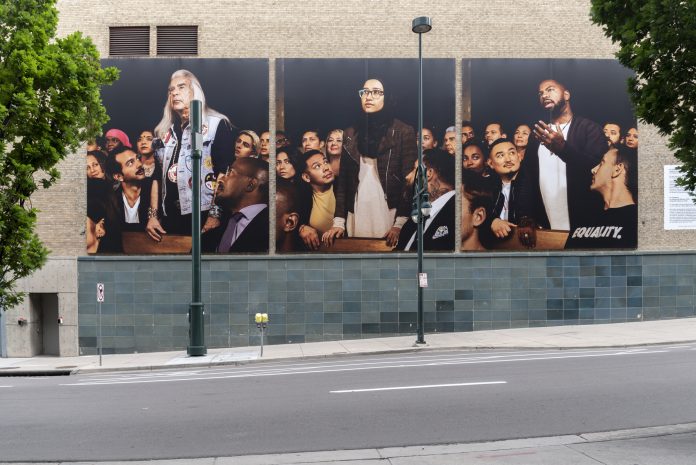 The United States has always had an interesting relationship with public art, especially if that art has any public funding. The inherently political nature of monuments makes them particularly susceptible to public scrutiny, which is probably the reason we’re seeing so few being made nowadays. For a long time monuments demonstrated wealth, conquest and political triumphs. For that reason, they don’t often age well – as seen with the recent social backlash against many monuments across the US.

The current state of monuments in the public consciousness makes this the perfect time to reexamine their function and confront their problematic nature. Black Cube Nomadic Museum and the Denver Theatre District have done just that with their MONUMENTAL project, a series of temporary public installations that acknowledge the tradition of monuments while giving us a glimpse at their possible future. Each temporary “monument” unpacks a different aspect of what it means to create a monument and for whom that monument was created.

MONUMENTAL kicked off in July and produced five major installations. Separately, each temporary monument makes its own statement, but when considered collectively, they comment on the legacy of humanity, contemporary society and the oft-problematic historicity of monuments.

The story behind Norman Rockwell’s iconic Four Freedoms illustrations is very patriotic. In 1942, Rockwell decided to illustrate his interpretation of the four freedoms — of speech, of worship, from want and from fear – that Franklin Delano Roosevelt defined in a 1941 speech. Already a legend in his own right, Rockwell’s illustrations communicated a US American ideal. They focused on the hard-working men and women of middle America rather than glorifying the wealthy — but looking at Four Freedoms now, it’s painfully obvious that all the subjects are caucasian. Most painfully, every subject in Freedom of Speech caucasian male.

While it would be a huge stretch to label the painting as problematic considering its context, Freedom of Speech unwittingly tells the history of the freedom of speech in America. Unfortunately, that history is often one of silence, violence and oppression for people who are not caucasian males. Enter the artist-run platform For Freedoms, which was founded in New York in 2016 “for creative civic engagement, discourse, and direct action.”

The name “For Freedoms” was inspired by Rockwell’s paintings and they reimagined each of the four freedoms to better reflect the diversity that actually makes America great. What we see in the MONUMENTAL triptych billboards titled For Freedoms, which was created by Hank Willis Thomas and Emily Shur in collaboration with Eric Gottesman and Wyatt Gallery of For Freedoms, is three of the many variations of Freedom of Speech.

“For Freedoms reconstructed all of the images, all four freedoms, and made a whole database available of them online so people could disseminate them on social media,” said Black Cube chief curator Cortney Lane Stell. “We worked with them to scale-up the images to make them higher resolution for the billboards. The repetition shows the diversity that’s actually present in our population.”

Even without the context of art history, the images contain a power that is itself monumental. Much like its predecessor, For Freedoms is beautiful and moving. But its true power lies in the personal meanings of each person who sees the faces in the images.

Black Cube is well-known for its ability to curate work by local, national and international artists. That ability is on full display in the exhibition The Fulfillment Center and Stell once again made sure local artists took part in MONUMENTAL. For the Denver artists, Black Cube installed a cement plinth to display the temporary monuments of three works by Nikki Pike, Noah Manos and Jaime Carrejo. It should come as no surprise that each artist has used the platform to demonstrate the diversity in culture, thought and practice found in Denver.

“This project and these activations have been so impactful and powerful in bringing people down [to the Theatre District] who don’t normally see themselves in the traditional downtown space, and specifically the Convention Center,” said DTD’s Annie Geimer.

For the first temporary monument to Denver, Nikki Pike decided her contribution would be more than temporary, it would be ephemeral. In lieu of one static piece, she invited Colorado-based creatives to perform on the MONUMENTAL plinth on July 12. As recounted by Stell:

“What she decided to do was use the funding for the project to disseminate to local creatives who were somehow not represented or not commonly represented. She gave them the platform and a few minutes of time to do something or nothing. They all could choose what they wanted to do. There were some really powerful performances.” 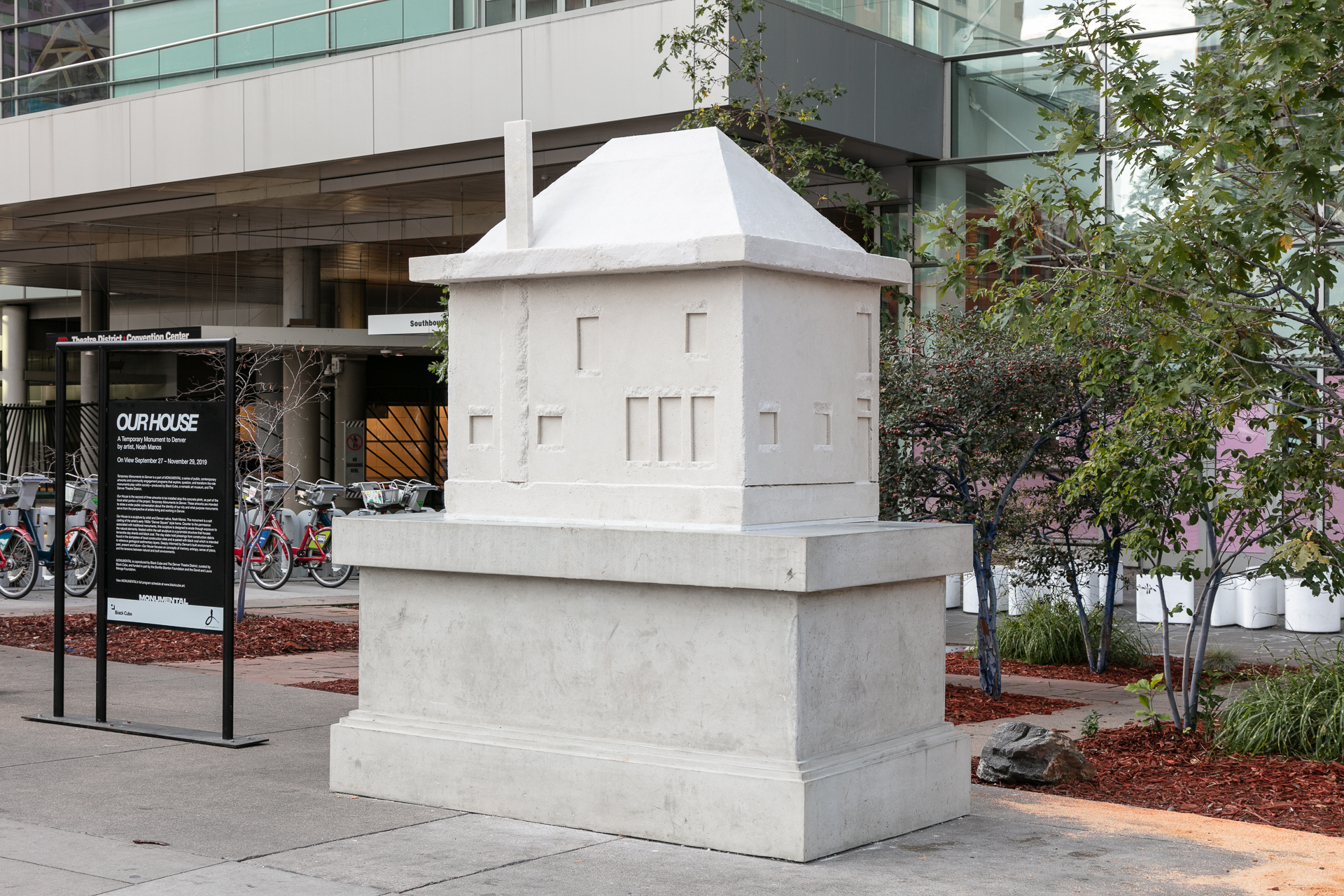 The second temporary monument was Our House by Noah Manos. It was a recreation of Manos’ Denver Square-style home that he built from memory on-site out of material that eroded with the weather. According to Stell, “It’s a metaphor for memory in general but also Denver’s relationship to building and erasing things.” While an appropriate metaphor for our city, especially in the past few years, it represented a special meaning because of how it transformed while on display – slowly breaking down into something unrecognizable.

“Although monuments exist in this sort of permanent faction, the population around them changes and grows and our relationship to them changes,” said Stell. “For Noah to produce something that’s meant to be a monument to our city that’s meant to erode and become nothing over time is very counter to our ideas of monuments. I think that gesture alone is quite poetic and interesting.”

Jaime Carrejo’s If once we ever were 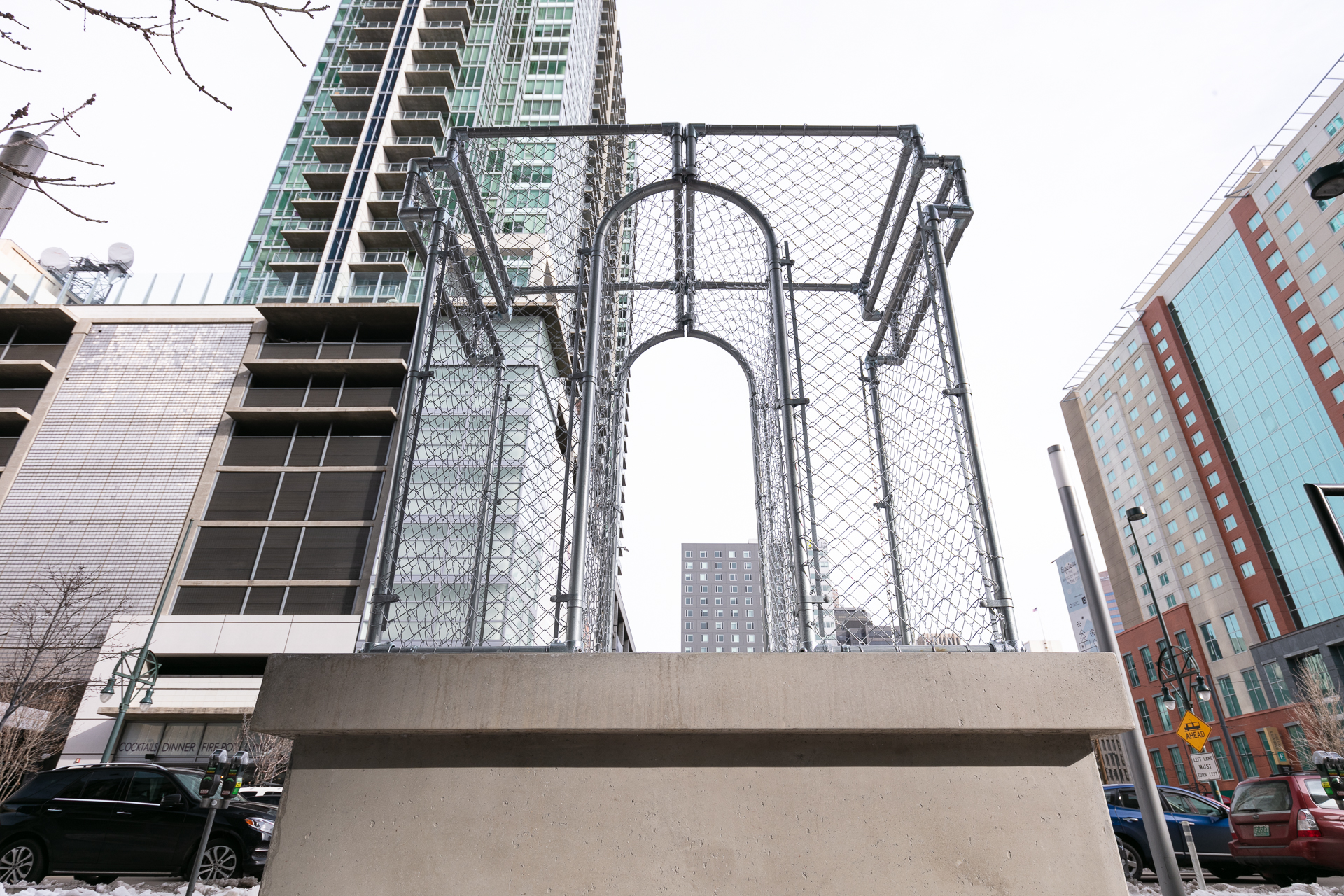 Chicana theorist and writer Gloria Anzaldúa once wrote, “Borders are set up to define the places that are safe and unsafe, to distinguish us from them.” There are few borders more contentious than the one separating the US and Mexico, which is why Jaime Carrejo chose to erect this triumphal arch made from border fencing. If once we ever were subverts the standard narrative of the arch that’s found throughout history and the world by dedicating it to immigrants and their contributions.

“He’s using fencing as a metaphor for boundaries and borders,” said Stell. “It’s a strong metaphor for what’s happening with asylum seekers and immigrants along the US-Mexico border and the caging of people.”

But it’s important to acknowledge that not everything related to immigration is or should be negative. The history of the United States is mostly an immigrant story and we have a rich history of immigrants contributing to everything from science to pop culture. That’s really what Carrejo wants to acknowledge in this work and it will be even more apparent when the second part of the monumental arch is installed.

On December 17, a communal blanket (for lack of a better term) will cover the arch. The blanket was woven with artificial carnations by members of the community. The carnations represent a colorful and hopeful future and they harken to Colorado’s Carnation Gold Rush that relied on manual, largely immigrant labor.

Temporary Monuments to Denver is located on 14th Street between Champa and Stout Streets in Denver. It is open to the public and closes on January 31. The reception for If once we ever were will be on December 17 at 5:30 p.m. 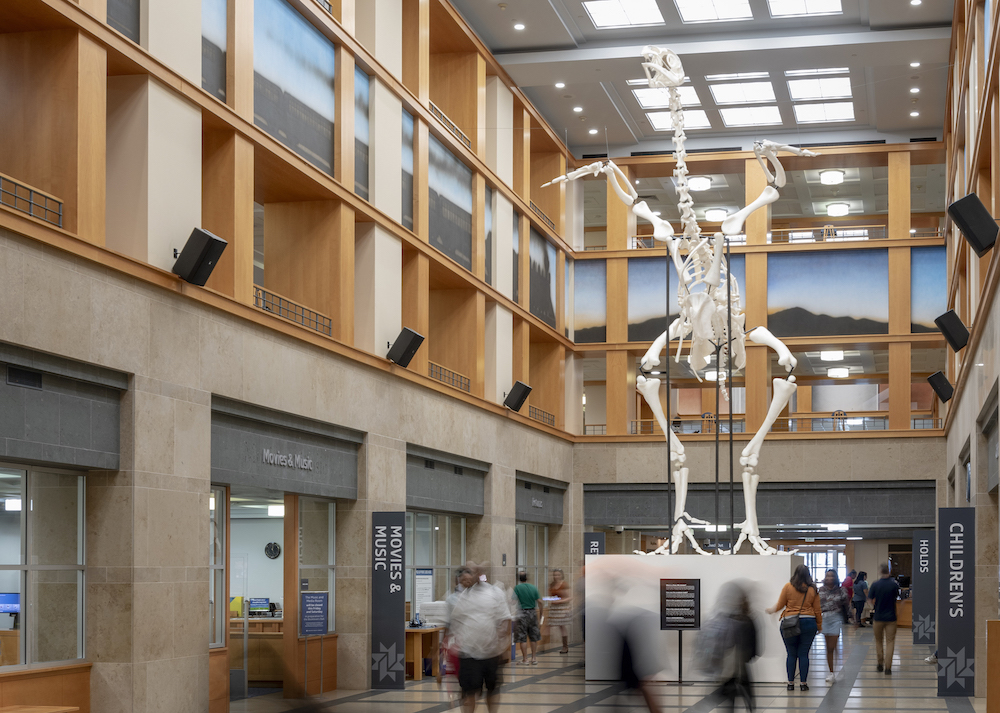 How willing are we to accept responsibility for what Nobel Prize winner Paul Crutzen calls the “unprecedented changes humans have wrought in the roughly 200 years since the industrial revolution”? We’ve constantly shirked such responsibility, but even more, we ignore our responsibilities as active consumers. German artist Andreas Greiner’s Monument for the 308 is asking us to recognize how our consumption contributes to humanity’s relationship with nature.

The Ross 308 broiler chicken has been bred to satiate the hunger of the masses. As a result, the chicken grows outward at a tremendous pace and is slaughtered before its bones reach maturity. Its resulting anatomy is as upsetting as its origin, which is exactly the reason Greiner chose to immortalize it at 20 times the size of the actual chicken – a size common among dinosaur fossils.

“Griener is interested in the Anthropocene, which is the current geologic era that we’re in that marks the period of time where humans have impacted our environment,” said Stell. “The 308 chicken is a mascot for the Anthropocene because they show our impact on our planet. They’re almost more than an animal, they’re like a commodity now. Dinosaurs are sort of the mascot for the previous geologic era and he’s trying to get us to think about our human legacy.”

But it’s not all doom and gloom in the Denver Central Library where the MONUMENTAL sculpture resides. Its location allows for some whimsy and playfulness, as seen on the library’s Instagram and in the interactions children have with it. There’s something almost magical about a child’s fascination with a 24-foot chicken. While they likely have no idea what it represents, it still makes you hopeful for a more mindful future.

Black Cube and the Denver Theater District recently announced that Monument to the 308 will stay up through January.