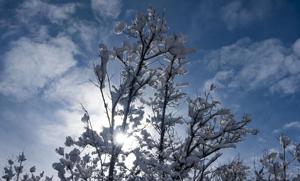 A storm system is hanging around the southern part of Colorado that will likely give the Pikes Peak region a touch of snow this week, following the battering of snow the area got last week.

Clouds will move over Colorado Springs late Wednesday, bringing the low near 28 degrees. The city could easily see some flurries early Thursday when temperatures are low enough, according to Makoto Moore, meteorologist at the National Weather Service in Pueblo, then the high will be closer to 40 degrees and rain showers are possible.

“This is a warmer system. Thursday might be cold enough for snow-mix showers in Colorado Springs, but it will bring new snow to the southern mountains,” Moore said. While Colorado Springs can expect a dusting, higher elevations are likely to get deeper snow.

As the storm hangs near the Four Corners, the San Juan mountains “will bear the brunt of it,” Moore said, noting the area could get up to 9 inches. “It’ll be too warm for the I-25 corridor and plains for any more than a dusting.”

From Thursday’s storm, Pikes Peak is likely to get 2-3 inches of snow, while Teller County and Monument Hill could see up to 1 inch. But south to the San Juan mountains, 5-9 inches of new snow is forecast and the Sangre de Cristos could see 1-4 inches.

A second storm is moving into Colorado from the west that is likely to hit Sunday and Monday.

“We’ll have a couple of nice, warm days ahead of the second storm, but right now it’s questionable,” Moore said.

As expected, Colorado was hammered with snow overnight.