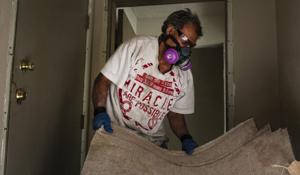 The hope for a long-sought revival of southeast Colorado Springs, including renovations of some of the city’s most notorious apartment complexes, has turned into a nightmare for a slew of tenants who’ve been ordered out of their homes because of asbestos contamination.

The scope of the asbestos contamination at properties owned by Denver-based Slipstream Properties broadened Friday with the revelation that a second apartment complex was cleared around Thanksgiving and several others in the city are under scrutiny by state regulators, according to the Colorado Department of Public Health and Environment.

The apartments’ owners have since come under investigation by the state health department for their handling of extensive renovations at their properties, the agency said. Exposure to asbestos, even minute amounts, can cause lung cancer and other deadly respiratory conditions.

“We’re trying to get a handle on the full scope of this issue as well,” said Curtis Burns, field operations unit supervisor for the state health department’s asbestos unit. “We’re trying to understand how widespread this is, how many apartment complexes there are.”

The owners of the two evacuated apartment complexes are drawing scrutiny from state regulators, who could fine them $25,000 for each day they were out of compliance, Burns said.

The ordeal comes as a stunning twist for residents who viewed renovations by their new landlords as a godsend after years of disrepair and code violations. The complexes’ previous owner, Terry Ragan, was often cited for failing to fix appliances and leaking roofs, cockroach infestations and rampant drug crimes and gang activity.

City and community leaders hailed the May 2018 purchase of Ragan’s seven apartment complexes by Slipstream as a new chapter for Colorado Springs’ downtrodden southeast neighborhoods. Within months, tenants reported maintenance calls being answered in record time and improving conditions at each property.

Now, scores of tenants are unexpectedly being forced to find new places to live as the holidays approach.

On Wednesday, nearly 100 people at Thrive at The Incline — previously the Shannon Glen apartments — were told to to clear out due to asbestos hazards.

And on Friday, the scope of that contamination grew.

State health officials said about 20 additional residents were told to immediately leave Thrive at Park’s Edge — formerly known as the Pine Creek Village apartments — in late November due to asbestos contamination at the complex at 720 Chapman Drive.

Since then, looters appear to have overrun the property — smashing in windows and taking belongings that tenants were told to leave behind for their safety, with the promise of being able to pick it up once the company gained a handle on the contamination.

Lori Long, 54, said she left with only the clothes on her back — only to have her most precious belongings stolen in her absence.

She stayed nine days at a hotel paid for by her landlords — a common offer to affected tenants. And she received $200 for incidentals, such as clothing, toiletries and food.

But with no apparent security presence at the apartments, her unit was looted of two laptops, at least one television, clothing and shoes.

“The way they did it was really horrible,” Long said. “We lost everything.”

The looting continued Friday afternoon, when a Gazette reporter saw another person breaking a window of a first-floor apartment before fleeing. Elsewhere, several windows and glass doors were broken, and abandoned toys lay scattered outside a burglarized apartment.

Long said she was glad to no longer be living in a new apartment, after having been placed in another unit owned or managed by the same company.

But she chided her landlords for their handling of the evacuation.

The growing mass displacements stem from a complaint received in November by the Colorado Department of Public Health and Environment, which regulates asbestos hazards.

Later, testing at The Incline found elevated asbestos levels in some areas — prompting another round of displacements. State health officials said they did not know about evacuation notices sent to residents Wednesday until after they were issued.

The state officials said they don’t have the authority to issue evacuation notices for asbestos hazards. Still, Burns said that residents should not hesitate to leave.

Asbestos can easily travel through ventilation systems and open doors or windows, while also attaching to the clothing of people inside a contaminated room.

“A little asbestos goes a long way,” Burns said. “I would not drag my feet.”

Residents of several other complexes purchased last year by Slipstream said Friday evening that word of the broadening asbestos hazards left them concerned they could be next.

At Thrive at Elevation and Thrive at the Pointe — formerly the El Vecino and South Pointe apartments, respectively — residents reported similar renovations as those at now-evacuated complexes, such as new windows, doors, carpets and sometimes upgraded appliances.

A building in the middle of Thrive at Slopeside — previously known as the Timbers apartments — stood boarded up.

“I’d imagine that if they had found anything like that, they would alert us about that,” said Tiffany Tramultolo-Forney, 31, a resident of the Pointe apartments. “I hope I don’t get sick.”