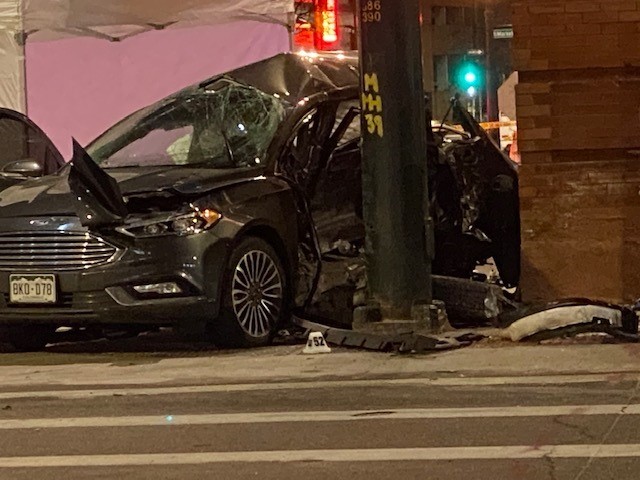 DENVER — Family members have identified the woman killed in a T-bone crash in LoDo Saturday night.

A tearful Sue Wainwright told Denver7 that her daughter, Jessica Marie Allen, was delivering food when she was broadsided at 18th & Lawrence Street and died.

Police say speed was a likely factor in that collision.

Police Officer Kurt Barnes says just how fast the other vehicle was going will be determined in the accident reconstruction phase of the investigation.

Barnes said two people were injured, including a pedestrian who was hit with flying debris.

Police believe an SUV entered the intersection at a high rate of speed and collided with Allen’s sedan, shoving it up against the old Spaghetti Factory building.

The SUV then slammed into the same building, knocking out part of the brick wall, and ending up on its side in the street.

First responders had to use the Jaws of Life to extract the driver and injured passenger.

Residents who live or work in the area says speed is an ongoing concern.

“You can see them driving down the street doing wheelies and everything,” said resident Tony Jay.

Jay, who gets around with a wheelchair, said nights and weekends are the worst.

“I mostly stay at my mom’s just because of that,” he said. “Sometimes I go to the store at night and I’m scared to cross the street because they could come screaming around the corner at any time.”

Barnes told Denver7 that speed is a problem on many Denver roadways.

“Whether it be residential, business, highways, it definitely is a situation,” he said.

And it’s not just speed that concerns residents. So does running red lights.

“We actually saw one, I think yesterday when we were going home. The guy took a red light. We had a green light. If we hadn’t been far behind them, we might have been T-boned,’ said David Salazar.

Police say the driver of the SUV was arrested. They’re not releasing names yet, but are pleading with residents to slow down.

“Respect the speed limit and honor that,” Barnes said.

Salazar said he exercises extreme caution when walking downtown, “because you never know what idiot might come down the street and hit you.”

A GoFundMe account has been set up to help Allen’s family.

She is survived by her two beautiful daughters, her husband, her parents, brother and four sisters, and many, many friends.