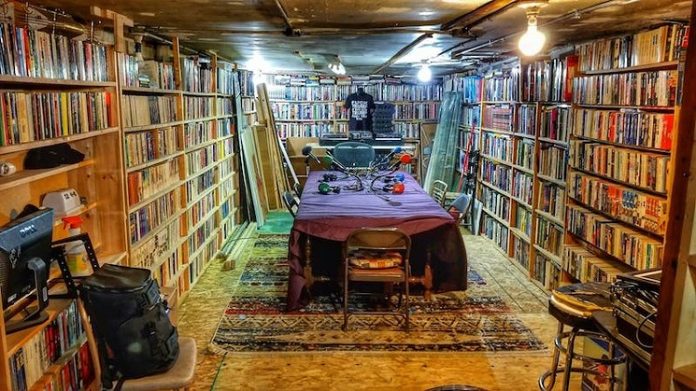 Let’s face it, Mutiny Information Cafe is a unicorn. For years this South Broadway staple has been a safe haven for creative types who need a place to call their own. In addition to being a cafe, bookstore, record store, comic book store, arcade and event space, Mutiny is now home to a brand “new” podcast studio, aptly dubbed “Davy Jones’s Locker.”

We use the term “new” loosely because the studio space feels like it’s been there for years. In a way, it has. The studio was carved out of the basement’s existing shelving system that housed many, many books. Some of the aisles are still there, with books enveloping you as you sit down at the microphones. There’s something very ‘60s about the whole thing, which perfectly fits into Mutiny’s counterculture vibe.

“Podcasts are one more chance to encourage people’s ideas. We work with a lot of comedians, poets, people who orate and make a living off that. It’s a way for us to build a bigger community than we already have and spread our ideas about what a community is,” said co-owner Jim Norris. “We can have the people we want come down and use the space. It was one more cool, natural thing to do that didn’t really cost much money.”

The podcast studio is a natural progression for the information cafe that already has Mutiny Transmissions to stream their current podcasts. Their existing arsenal includes Queen City Companion, Motherf**ker in a Cape and Hello? Denver? Are You Still There? Each has its own voice but all of them are smart and entertaining.

It’s also a natural progression for Norris and the other co-owner, Matt Megyesi, who met doing zines in the mid-’90s.

“It seems to me that podcasts are the zines of the internet,” said Norris. “They’re extremely personal and they’re fascinating.”

“You can crank out a bunch of them and get to a lot of different people, more so than you can with zines because the information’s disseminated in a totally different way,” said Megyesi. “You’re not limited by paper publishing anymore.”

Much like zines, depending on who your audience is, even small businesses can get in on the action. In fact, that’s something Mutiny is looking forward to, especially for helping their fellow Baker residents.

“You look around and a lot of business magazines are talking about podcasting, too – Meow Wolf has a podcast out. Buffalo Exchange is looking to do a podcast to talk about their business and what they do,” said Megyesi. “It’s a great way to help the small businesses that are in our niche little world here. It’s also probably cheaper to do it here than a lot of other places and there aren’t as many rules.”

For a lot of people, the prospect of starting your own podcast can seem like a daunting task. But don’t worry, Mutiny has you covered. They provide an engineer to work the soundboard and make sure everything is running smoothly and professionally. With a two hour block, that should get you plenty of content to work with. In fact, once you get the hang of it, you should be able to bust out at least two episodes in one sitting. You can also capture the podcast on video to share with an even wider audience.

Now, if you’ve never heard of Mutiny Information Cafe, that’s okay. If you’ve heard of it but you haven’t been inside, that’s okay too. The fact that Mutiny welcomes everyone means some people aren’t ready for it. As the de facto home for us weirdos and outcasts, it’s one of the best kept open secrets in Denver, and Norris wouldn’t have it any other way.

“If someone has something creative but doesn’t have an outlet for it, we want to be here for that. That’s why we do live music and poetry upstairs,” said Norris. “This just ties into our big idea that we can create our own little universe where we can take care of artists. Our next level is the podcasts, to continue that inclusivity and excitement.”

A single, two-hour session is $50. You can purchase a monthly package with eight hours and four sessions for $180. For booking inquiries, you can stop into Mutiny at 2 South Broadway, or email Jim Norris at rev.one26@gmail.com