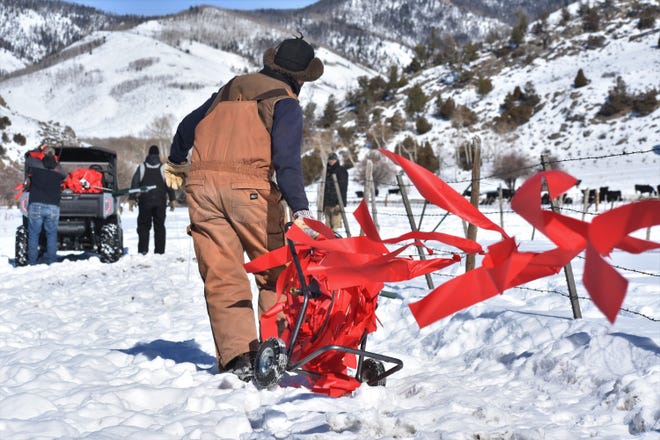 JACKSON COUNTY — Colorado rancher Don Gittleson used to get up at the crack of dawn to check his cattle. Now it’s the crack of midnight.

Why the time change? Wolves.

On Monday, about a dozen people helped Gittleson trudge through the deep snow to put up 3 miles of fladry around a pasture near his ranch house. The thin electric fencing with flags that wave in the wind was erected to deter a nearby wolfpack that killed one pregnant heifer at the ranch, injured another badly enough it had to euthanized and killed a calf in the early morning hours over the last five weeks.

Colorado Parks and Wildlife confirmed the kills as well as that of a working cattle dog on an adjacent ranch.

Gittleson and his wife, Kim, received help from neighboring ranchers and the U.S. Department of Agriculture Wildlife Services in Fort Collins, which also brought four propane canons that fire at timed intervals to scare the wolves.

Talk among those who put up the fladry as a first line of defense likened it to applying a Band-Aid to a serious wound.

Despite their lack of faith in the fencing’s ability to help in the long term, they acknowledged the effort had to be made in good faith to help calm an increasingly contentious situation as Colorado deals with wolf depredations for the first time in decades.

“Everything we are doing now is temporary, so hopefully we can find some things that are more than temporary,” Gittleson said in the middle of one of his cattle pens on Monday. “It really depends on the wolves how long this works. I’ve heard a few weeks, 60 days and 90 days. Hopefully we get at least 60 days.”

The Gittleson Angus ranch is far from the rest of society. It’s located 13 miles northeast of the small town of Walden and 8 miles off the nearest paved road, with nary another ranch in sight. It sits nestled against the west flank of the Medicine Bow mountain range with 360-degree views of breathtaking beauty.

But wolves have shone the spotlight on this remote ranch comprised of 11,000 acres of leased state and private land. And Gittleson, who is alone on the ranch during the week, feels the pressure from the media attention and all sides of the wolf issue as well as the long hours of working all day and, now, at night.

“I’m aware that there are lots of eyes on me,” said Gittleson while pulling his cellphone from his Carhart coat pocket to answer yet another call. “Normally I can go a week and get two to three calls. Now I don’t go through a day without two, three or many more phone calls.”

Gittleson said the pack of wolves that includes two adults and six pups born last spring haven’t been seen in the area the last couple days. But he expects them to be back, as they have been many times over the previous months. He hopes the fladry will buy him some time to find longer-lasting solutions to protect his herd of about 180 registered Angus cows.

He said USDA Wildlife Services has been looking to hire a range rider to check his cattle at night and that a “pro-wolf” individual from Gunnison called and offered to range ride. Many wolf experts say constant and consistent human presence, such as range riders, is critical to breaking the learned behavior of wolves killing livestock.

John Murtaugh, the Defenders of Wildlife representative for the Rockies and Plains, said the organization donated a mile of fladry to help Gittleson. He said Gittleson’s losses have been exceptional.

“When this kind of situation happens, you usually get two kinds of reactions,” Murtaugh said. “Some dig their heels in and don’t want to change. Don’s perspective is he might not like the wolves and the loss of his cattle but he understands this is the new reality and it’s time to adapt to have success in this environment.”

Murtaugh said these situations work best when the community owns the issue and works together to resolve it through discussions surrounding actions needed to address the problem.

“There is always a lot of anxiety involving wolf issues, and right now that certainly is the case on all sides,” he said.

Gittleson is unsure if the fladry will work in the short term. He admits his concerns are already on the safety of his herd during the calving season several months away as well as this summer, when his cattle are grazing far away from the protection of his small pastures and pens close to his house where they winter.

“They wanted us to save doing this (fladry) until calving season because it was only going to work so long,” said Gittleson, who said an area rancher took some of his younger cows to his pasture to protect them from wolves.

Gittleson decided to move forward with the fladry now because of the imminent threat the wolves bring to his herd.

It was his best option to address that threat immediately, he said, but he’s “not sure what I’m going to do during calving season now.”

History of wolves in Colorado

1934: Wolf excluded from game status in Colorado and is left unprotected.

1973: Wolves are protected under the federal Endangered Species Act.

1974: What was then the Colorado Division of Wildlife announces part of its objective is to provide protection and management to establish a minimum of 20 wolves in the state.

1993: U.S. Fish and Wildlife Service begins $50,000 feasibility study to determine if biological and social attitudes conducive to wolf reintroduction exist in the state.

1994: Feasibility study indicates the state could support up to 1,128 wolves. Colorado State University Human Dimensions in Natural Resources Unit’s poll on wolf reintroduction indicates 71% of Coloradans polled approve of it.

2019: In July, a female wolf fitted with a GPS-tracking collar is confirmed north of Walden and to be from Wyoming’s Snake River pack. It marks the first confirmed wolf sighting in four years.

2019: Rocky Mountain Wolf Project announces it will seek signatures to place on the 2020 ballot.

2020: In January, Colorado Parks and Wildlife confirms a pack of six wolves in Moffat County in extreme northwest Colorado. It is believed the pack wandered in from other states. As of early 2022, the pack is no longer there.

2021: In January, U.S. Department of the Interior’s rule to delist the gray wolf from federal protection under the Endangered Species Act takes effect. The move transfers management authority over the gray wolf in Colorado from the U.S. Fish and Wildlife Service to Colorado Parks and Wildlife. Wolves remain a state endangered species.

2021: In February, for the first time since Colorado took over management of wolves, a male wolf is captured via helicopter and fitted with a tracking collar.

2021: In spring, Colorado Parks and Wildlife confirms the first wolf pups born in Colorado in likely 80 years are discovered north of Walden. The parents are the two wolves seen in the area and fitted with tracking collars. Six pups are born.

2021: On Dec. 19, Colorado Parks and Wildlife receives a report of a calf carcass on a ranch north of Walden in Jackson County near where the pack of wolves have denned. The state wildlife agency confirms it to be a wolf kill that week, and it is believed to be the state’s first wolf kill of livestock in more than 70 years.

2022: On Jan. 9, a rancher near where the calf was killed reports wolves killed his working cattle dog and injured another. The kill is confirmed by Colorado Parks and Wildlife.

2022: On Jan. 18-19, two pregnant heifer cows are confirmed killed by wolves (one was euthanized due to its injuries) on the same ranch that earlier lost a calf.