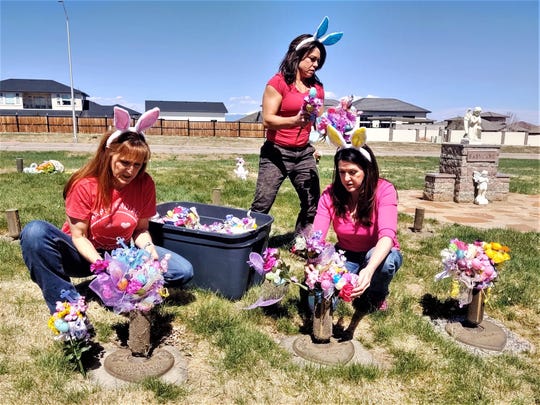 PUEBLO — Although DeAn Dickinson never had the chance to meet her niece Chelsea Dawn Dickinson, she’s never forgotten her.

Nor the hundreds of other little ones laid to rest alongside her in a Pueblo cemetery.

Only 3 months old, Chelsea Dawn was fatally injured in a June 18, 1999, automobile accident that also claimed the life of another child.

The tragedy occurred in New Mexico. At the time, Dickinson’s brother Mike and his wife Shawn, the infant’s parents, were living in Oklahoma.

“They were on their way to Colorado so I could meet the baby,” Dickinson said. “She would have been 21 in February.“

As the Dickinson family has deep roots in Southern Colorado, Chelsea Dawn was returned to be buried in the Babyland section of the Imperial Memorial Gardens cemetery.

Every Christmas, Dickinson visited Babyland to make sure that her niece’s grave marker was clean and embellished with the ornaments of a holiday she would never experience.

Many of the children buried there, however, didn’t seem to have the luxury of being remembered.

“As I looked around, I noticed all these babies out here with no flowers, no decorations. Nothing,” Dickinson said. “And I realized that maybe their parents have moved away, or passed away with them, or just find it too painful to come out here.

“And the fact that so many kids didn’t have anything really upset me.”

Through a GoFundMe account, Dickinson was able to raise $400, which she used to purchase Easter-themed adornments for all of the estimated 300 children laid to rest in Babyland.

“Easter and children go hand in hand,” Dickinson said. “So I wanted to make sure I took care of all the babies.”

As the boxes of decorations and flowers made their way out of the vehicles and onto the cemetery grounds, the barrenness of the landscape was impossible to ignore.

“Look around,” Dickinson said. “It’s pretty bare: maybe 20 graves have stuff on them. And it’s the weekend before Easter.

“But soon, every baby is going to have something on their grave.”

Without hesitation, Dickinson, with help from friends Lori Santilli-Green and Cindy Poole, hit the ground running, first cleaning the markers of debris and then adding the vibrant reminders of the most important of all Christian celebrations.

“A lot of these babies have been forgotten,” said Santilli-Green, sweeping dirt off a marker to reveal the name of the infant and the fact that newborn lived to see but a single day.

Or perhaps not even that long.

“This is my first time doing this,” Santilli-Green continued. “I love kids and it’s very sad to see that some of these graves haven’t even been pulled up at the vases. I’m sure that for many people, it’s very sad for them to come and visit.

“Or maybe they aren’t even around anymore.”

Before long, a swash of hopeful color began to unfold over Babyland.

But the work, rewarding though it is, is also extremely taxing and heart-rending.

On the marker of a child whose time on Earth was but a few months, Dickinson places a “Bunny Please Stop Here” ornament and a white stuffed animal.

A commendable expression of love and compassion and a solemn reminder that this little one never had the chance to revel in a visit from the Easter Bunny, nor hunt for colored eggs and bite into a sweet chocolate one.

“This can be very hard,” Dickinson said. “I’ve had to stop several times today to wipe away the tears.”

Many markers are so encrusted with dirt as to obscure the name of the child buried there. Others are marred by overgrowth.

“Dad,” Dickinson calls out her to her father, who along with his wife and two sons have joined the trio of women. “I need you to pull these vases up. They are full of dirt and I can’t move them. Some of these have never been pulled up.”

Together with his mother, Beverly, Mike Dickinson approached the marker of his daughter Chelsea Dawn: “our precious little angel.”

“It’s totally awesome what my sister is doing for all these kids,” Mike Dickinson said. “A lot of people don’t want to come out here because it hurts too ad. But this shows that a lot of people do care.”

For Beverly Dickinson, the pain that accompanies the loss of a granddaughter, especially at so young an age, will never abate.

But she takes some consolation in the prepping of Chelsea Dawn’s resting site in such a lively and inspiring fashion.

“We met her two weeks before she passed away,” Beverly Dickinson said. “She was the cutest, sweetest, happiest baby, ever. And to lose them so young: it just crushes you. It touches a grandparent so badly.

With a faint smile, Beverly Dickinson recalled a special moment from the brief time she spent with her granddaughter.

“Daddy used to hold her over his head and say, ’Grandma: Chelsea wants everything in her bedroom to be purple,’“ she said. ”Well, we didn’t get to do that, so we’ re making sure to put a lot of purple on her grave today.“