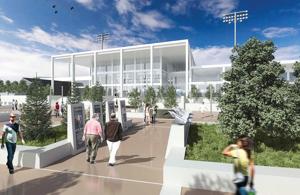 The $58 million project, part of the City for Champions initiative that community leaders say will draw tens of thousands of tourists to the Pikes Peak region and pump millions into the local economy, has received final approval from the Colorado Economic Development Commission that will allow it to break ground early next year.

“This is a major milestone,” said Bob Cope, Colorado Springs’ economic development officer, who’s been the city’s point man on City for Champions.

The Economic Development Commission’s OK means bonds for the visitor center probably will be issued in January, Cope said Thursday. A groundbreaking would follow in February, he said.

“They made it,” said Jill McGranahan, a spokeswoman for the state Office of Economic Development & International Trade, whose staff works with the commission.

The commission’s green light for the visitor center is the culmination of a series of approvals for City for Champions, four projects proposed by city officials and civic leaders six years ago and designed to enhance state tourism by drawing first-time tourists to Colorado.

Besides the visitor center, City for Champions is composed of the downtown U.S. Olympic & Paralympic Museum; a sports medicine and performance center at the University of Colorado at Colorado Springs; and a sports and event center that’s made up of an outdoor, multiuse downtown stadium and an indoor arena at Colorado College.

In December 2013, the Economic Development Commission — an 11-member panel appointed by the governor and Legislature to promote Colorado’s economy — agreed to provide up to $120.5 million in state sales tax rebates over 30 years to help fund City for Champions. When proposed in 2013, the projects had a combined price tag of about $250 million.

As a condition of receiving state money, each City for Champions project was supposed to begin “substantial work” by December.

The museum and sports medicine and performance center met that deadline; each of those projects is finishing construction and expected to open in 2020.

The visitor center, stadium and arena, however, were given an extension until December of this year to demonstrate they had started “substantial work” — a threshold that included, but wasn’t limited to, construction, excavation and grading.

Last week, the commission agreed that the stadium and indoor arena had begun “substantial work.” At the same time, the Colorado Spring City Council approved a development plan for the stadium; the council is scheduled to consider a similar land-use plan for the arena in December.

The roughly $35 million stadium — to seat 8,000 for Colorado Springs Switchbacks soccer and about 15,000 for concerts and other events — is scheduled for a Dec. 7 groundbreaking. The $39 million Colorado College arena is targeting a groundbreaking in early 2020.

The Colorado Springs Urban Renewal Authority this week sold $13 million in bonds for the stadium, which will be repaid by the state sales tax rebates. The Switchbacks and Weidner Apartment Homes of suburban Seattle — a multifamily developer and investor whose founder grew up in the Springs and has several projects here — are partnering to cover the rest of the stadium’s cost.

That mixed-use development also will include a high-end hotel, offices, retail and commercial space and an entertainment venue, according to the Air Force Academy. The academy covers more than 20,000 acres just northwest of the Springs.

Project backers have estimated the new visitor center would draw 158,000 first-time tourists to the academy each year, while generating $67 million in annual tax revenue and pumping more than $2 billion into the city’s economy over 25 years.