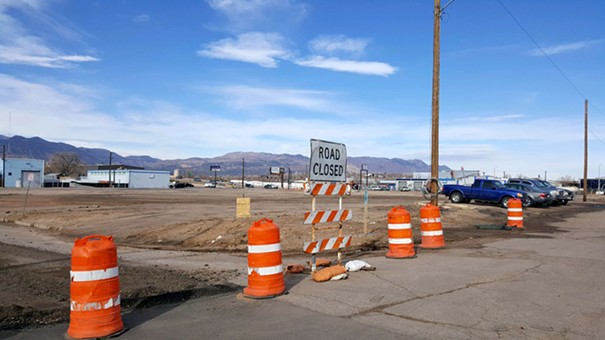 If you’re counting on attending a lot of Colorado Springs Switchbacks soccer games at the team’s new downtown stadium, get in shape.

Much of the parking to accommodate Weidner Field, named after contributor Weidner Apartment Homes, lies blocks away and some of those slots might require a mid-match trip to your car to plug a meter.

Though the plan calls for wide sidewalks bordering the stadium itself, many of the 8,157 attendees expected to stream there on foot will hoof it for up to six blocks under the stadium’s parking plan. It’s worth noting Colorado Springs already has built a reputation for racking up dozens of pedestrian deaths in recent years, the most recent being Nov. 16.

But take heart — city parking enterprise manager Scott Lee says the city eventually will catch up with parking needs based on a study never done before in Colorado Springs that will enable the city to more accurately forecast where to build public parking structures. Results are due in early 2020.

“We’ll be better prepared to predict our city’s needs,” Lee said. “We don’t want to have an oversupply.”

The stadium, six years in the making, will be erected southwest of Sahwatch and Cimarron streets, partially funded with a portion of $120.5 million in state sales tax money allotted by the Colorado Economic Development Commission as part of the Springs’ City for Champions (C4C) development package.

Other C4C venues include the U.S. Olympic & Paralympic Museum and Hall of Fame at Vermijo Avenue and Sierra Madre Street, the William J. Hybl Sports Medicine and Performance Center at the University of Colorado at Colorado Springs, the Air Force Academy Visitors Center at the North Gate Boulevard Interstate 25 exit to the Academy, and Robson Arena, at the southeast end of the Colorado College campus.

The stadium, due to open in 2021, has been hailed as a catalyst for lower downtown. As the city staff noted in their report, “The project will bring much needed investment and density to a portion of downtown that has struggled to see progress over the last decade, despite significant reinvestment in other parts of downtown.”

Adhering to the Downtown Colorado Springs Form-Based Code adopted in 2009 (more on that later), the city will allow the stadium to go up without adding any parking. Stadium developers, though not required to, will add 85 spaces for normal weekly activities, such as visitors to its restaurant and sports medicine center.

The Switchbacks will play 22 games from March to October at the stadium, which also will host roughly 50 to 60 Olympic National Governing Body trials and competitions a year. Those amateur events, though, likely won’t draw large crowds, so parking shouldn’t pose a problem, says the city’s economic development officer, Bob Cope.

A $35,000 stadium-only parking study, funded by several partners, including the city’s parking enterprise, and produced by Felsburg Holt & Ullevig of Colorado Springs, forecasts that 85 percent of the 8,157-capacity crowd for soccer matches will arrive by vehicle, with an occupancy of 2.9 people per car. That’s 6,933 people on foot in an area that reaches from Colorado Avenue to the north, to beyond Fountain Boulevard to the south, and east to Wahsatch Street. The balance, 1,224 people, are expected to arrive other ways, such as by scooter, transit, bicycle or Lyft and Uber.

The idea is to allow the neighborhood and business districts in that vicinity to absorb the extra vehicles on game days, which will mostly be Saturdays in the late afternoon or early evening.

That sounds like a bad idea to Elsie Gonzales, who lives 2½ blocks south of the stadium site on Sahwatch.

“I don’t think that would be very good,” she tells the Indy from her doorstep. “Oh, brother, that’s not going to be good.” She adds she knows someone who lives near an arena in Denver who reports vandalism, fights and burglarized vehicles in the immediate vicinity on event days and nights. “I would be against it,” she says.

Another resident who lives 1½ blocks southeast of the stadium site wouldn’t give his name but seconded Gonzales’ motion. “We have decent parking down here, but if they do all that, we don’t have room,” the man says.

If the neighborhood feels “overwhelmed” by the stadium’s parking demands, Lee says residents could seek to impose residential permitting restrictions that would limit outsider parking to certain times of day and days of the week.

“Generally, it works pretty well when neighbors and the city work together, because we can enforce it,” he says.

Parking concerns, though, might take a back seat as the stadium’s presence impacts property values, Cope says. “If you look at any case study where that kind of investment in a stadium is made,” he says, “it has a positive impact on property values.”

The study also suggests the stadium coordinate with the Pikes Peak Center on event dates to enable dual use of El Paso County’s garage at Sahwatch and Costilla streets, but nothing has been worked out yet.

Councilor Bill Murray voted to allow the stadium project to advance, hoping “the city would come to their senses,” but he adds in an email, “This seems more unlikely daily.”

Though he asked for charts to show exactly where all the cars would park, none were provided, he says. “Chief of Staff [Jeff Greene] talks about resuming shuttle[s] but no money nor time spent in developing a plan,” Murray says. “Walking across an arterial like Cimarron en mass is an accident in the making.”

Last year, 13 pedestrians were killed in traffic in Colorado Springs. As of Nov. 20, nine had been killed in 2019.

The Felsburg parking study notes traffic signals are “anticipated” at Colorado Avenue and Sahwatch Street and at Cimarron and Sahwatch streets, but no timeline was given for installation.

As for shuttles, Lee says the city might consider resurrecting the downtown service tried out several years ago, but that’s on the back burner for now.

Lee says a new study now underway will help guide the city’s decisions on where and when to build a new garage.

The roughly $60,000 study, by Kimley-Horn & Associates of Colorado Springs, will create a model that will take into account types of land uses and locations to identify the most logical placement. For example, a business that’s open only during daytime hours could share parking with those that draw crowds at night, he says.

“This will help us look at every location, including a site by the Olympic Museum, the needs around the stadium and the Tejon corridor,” he says, where an entertainment district was recently created by the city. “We’ll build a database of use and occupancy at different times. This will help us coordinate better with developers and others. It takes a lot of time to build every land use in there and stay up on it. But in the long run, it’s going to be worth it to us, because we’ll make better decisions.”

Such planning and, ultimately, construction of another garage, derive from the city’s form-based code, which carries a zero parking requirement of developers.

On the other hand, it makes no sense to build a parking garage that isn’t used throughout the year, he adds.

“It wouldn’t be good land planning to have it sitting vacant all that time,” Cope says. “If demand increases and the parking enterprise does its study and determines there’s day and night demand, they can build one structure that will fill up during the day with office workers, and during the night people going to events or bars and restaurants will use the same structure.”

The city sought bids in 2016 for design of an underground parking garage envisioned beneath a tract owned by Nor’wood Development Group located just east of the Olympic & Paralympic Museum. Nor’wood plans a highrise building there.

But Lee says while that parcel remains one possibility, the city hasn’t locked in a garage site.

“Parking always evolves,” Lee says. “If other things start happening in that [stadium] area and residential neighborhoods start seeing more mixed use, things will always change. That’s how this model will help us. Everything south of Vermijo now is really going to change, with the museum and stadium.”