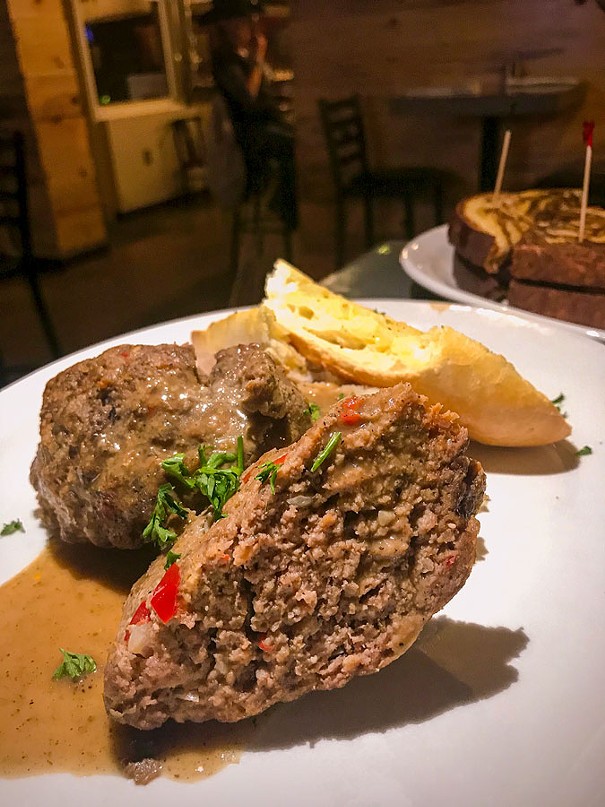 I’m staring at the red cursive type on a white background that is the The Roswell’s signage, the sum of its design (or lack thereof). It’s as if someone was in the wear-sweatpants-to-the-grocery-store mood when it came time for branding. This, at the Lincoln Center, an otherwise highly polished, hip hub, home to stellar craft beer, phenomenal bread and pastries, nourishing health food and top-notch coffee. So why this misplaced, bygone-era bar, a study in banality that forces me to question this city’s culinary direction?

To review: Locally accomplished Chef Jay Gust (owner of Pizzeria Rustica and TAPAteria) opened Smørbrød in mid-2018, gifting us our first Scandinavian spot. That cuisine has been one of the hottest global food trends of late, so leave it to the Springs to spurn the movement, showing that, like a child who breaks toys, we don’t deserve nice things. Smørbrød’s recent closure ushered Gust into a sublease to The Roswell, in which he retains a minor ownership stake, and consulted on the menu.

Enter proprietors Ross Seville and his wife Lauren Lea, and Michael Head and his wife Tara. Nice people, sincere, front-facing and hands-on, with decades of collective experience. But their concept, a “compilation of American classics… easily accessible, but taken up a notch,” as described to me by Ross, actually comes almost as an anti-craft manifesto, with meatloaf as the house specialty. (No notches have been upped in the making of this restaurant.) It’s a place “where nobody’s judging if you prefer a simple Jack and Coke,” he’d said.

Elitist as it may sound, food and drink journalists don’t wake up each morning with the hope of writing about Jack and Coke-level goings on, and we believe our readers too seek sophistication and unique experiences. Our hearts beat for chefs forging new ground, challenging palates, or telling their cultural stories. We relish the roasters, distillers, brewers and mixologists obsessing over minutiae in search of perfection. Flavors worthy of inquiry and ink. Yes, there’s a time and place for non-pretentious fare: when you are at home. Or at a hospital or school or corporate cafeteria.

Not to hang too heavy a yoke of judgment around their necks with broader city commentary, but what worries me most is The Roswell, in replacing Smørbrød, may be the bellwether of backward progress. More humdrum fare appealing to a group of diners uninterested in the unfamiliar. Is this the dwindling demographic I hope it is, for the sake of creative, independent eateries everywhere struggling against bland chain-food dominance? Or does The Roswell — bustling with happy-looking people on both my visits — signify that indeed this is what The People, if not just the neighborhood after which the eatery’s named, actually want?

Affordability doesn’t even appear to be a factor: An extremely basic sandwich at The Roswell actually cost a dollar or few more on average than the Copenhagen-style open-faced sandwiches served at Smørbrød — nearly equal on average to East Coast Deli, where at least there they’re piled high. Our $13 Bonnieville, essentially a Reuben minus the sauerkraut (why?), arrives on commercial marbled rye, skimpy, with leathery, faintly seasoned pastrami in place of typical corned beef, gooed by melted Swiss and some Thousand Island dressing. Totally meh. And though I adore all things truffle, there’s so much truffle salt on side potato chips it assaults the senses.

I have a bowl of the only soup, a curry chicken, light on the advertised ginger, and it tastes fine, but like nothing you’ll remember or tell a friend about (unlike Smørbrød’s superlative seafood soup). Garlic hummus, also a scant portion for $9, tastes good with the seeded crackers and glistening purple carrots prettily halved with their stems on. But that’s as “elevated” as we see Roswell get. Rabbit food.

The aforementioned meatloaf really is more of a baseball-sized Italian meatball for $13, strong with fennel essence. It’s decent alone. The problem’s the insipid mashed potatoes and boring brown gravy that work against that Italian-ness in a way that makes you crave marinara sauce and pasta or pizza instead. But apparently I’m the odd man out, since we’re told it’s the bestselling item.

At the bar, there are some decent spirits that surpass basic well-drink offerings, but nobody has designed good mixed drinks with them, so you’re virtually on your own for anything other than the four cocktails the menu lists. One being a Bee’s Knees, a Prohibition-era drink commonly seen on craft menus, and another being an apple-cinnamon vodka, Irish cream liqueur and creme de cacao mix that cloys enough in the reading alone to deter us.

So we get the Blue Monday, made with Golden, Colorado-based Vanjak Vodka and vermouth, with blue-cheese-stuffed olive garnish. So it’s a vodka martini, just made so out of balance that all we taste is the corn-based vodka. More disappointing, the Cimarron Tequila house margarita aims to be a Cadillac Margarita, with Clément Créole Shrubb Liqueur d’Orange subbing in for Grand Marnier, which would probably work well enough were fresh juices employed instead of always-vile sweet-and-sour mix, the hallmark of a miserable marg. I ask for the drink without it, and am told they can sub fresh juice, but the bitter result tastes like someone just poured a bunch of lime juice atop the mix anyway. Also jarring: a layer of salt resting at the bottom.

We depart agreeing on a brutal honesty: The Roswell offers nothing that would ever lure us back. Like the nonexistent branding, it’s such a blank that I don’t really know what it is other than what it isn’t. I don’t know if the neighborhood really needed more meatloaf or if uppity-ass Lincoln Center needed a blue-collar component to knock it to its knees a little.

I do know that Gust is a much better chef than this represents, so other than a tight turnaround to relaunch and perhaps food cost or rent concerns or something unseen that’s forced a feeble hand, I don’t know how this vapid product resulted from his menu consultation.

Not to sound like a parent scolding a child — “this isn’t the time or place” — but that’s how The Roswell strikes me. The Springs scene doesn’t need another spot for ubiquitous pizza and club sandwiches and Cobb salads, particularly if they rank unremarkable and not even a value. We were better with a new cuisine in our portfolio to move our scene forward. If this is all The Roswell aspires to be, and if that’s what people do want in the Lincoln Center, then so be it, but I don’t get it.