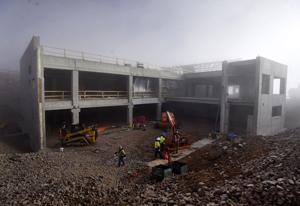 The concrete walls and steel beams assembled slowly and deliberately atop Pikes Peak are taking shape.

Crews broke ground last June on the $60 million undertaking and they’ve worked since then to replace the original Summit House, built in 1963. The new, 38,000-square foot structure is expected to be open next fall.

Ambling among the summit’s loose rock, Glavan gestured to a plot along the south side of the skeletal building where a dining plaza will be built. That’s adjacent to where a boardwalk will connect to the Pikes Peak Cog Railway — which is currently closed, pending repairs — and near the retail and dining space and interpretive center.

But perhaps the pinnacle of the new building — twice the size of the original — will be the walk-out and open-air deck and the upper lobby, which will be shrouded in glass, offering unobstructed views of the nearby Mount Rosa south to the Spanish Peaks.

Steady work, so long as the weather holds out, Glavan said. Temperatures atop the mountain are typically 20 degrees colder than in Colorado Springs, he said.

But it’s not the cold that worries crews.

“When we don’t have wind, it’s a good day,” he said Thursday afternoon atop the mountain, squinting toward the eastern plains.

It’s the wind that can complicate or delay construction, said James Shepherd, the site’s superintendent for GE Johnson.

Fortunately, crews “topped out” the building recently, Shepherd said, meaning that the basic structure is nearly complete and sealed off from the elements. It’s a significant milestone because not only can people see progress with the building, but also because crews can begin shifting to interior work soon, he said.

“We’ve got a couple weeks, we think, of good weather left,” Shepherd said.

During that time they’ll seal off the rest of the building from the chilly exterior, Shepherd said.

“Any cracks we’ve got up here — between the snow and the wind — it all gets driven in here,” he said.

Inside the building, propane heaters run, wires hang from the ceilings and pipes jut from walls, waiting to be connected. Lighting is limited as Shepherd switches his shaded safety glasses for clear ones.

There’s plenty of work to be done inside, he said, walking from basement mechanical and electrical space, upstairs to what soon will become office and back-of-house kitchen space.

The Summit House will even include an emergency shelter, Glavan said. Although it won’t be all that easy to reach, he said.

With about eight inches of geo-foam insulation, the building is about twice as insulated as a typical building, Shepherd said. Once it’s sealed, it doesn’t take much to heat.

Certainly unique considerations must be made when building atop a 14,115-foot mountain, Shepherd said. They must even take care that concrete doesn’t begin to set during the approximately two-hour drive to the top.

Logistical complications aside, Shepherd noted that the Summit House is indeed the undertaking of a lifetime and it’s unlikely there’s anything like it anywhere in the world.

The building is set into the mountainside for an immersive experience, designed to weather the extreme temperature changes, he said.

“It’ll feel like it’s actually a part of the mountain,” he said. “It’s here to last. It’s going to outlive most of us.”

In the future, the Summit House should be able to handle about 1 million visitors a year, Shepherd said.

Despite the construction, the Cog’s closure and limited parking space at the summit, tourism hasn’t especially slowed, Glavan said.

About 1,600 people are summitting daily, he said, which would be slow for the peak season but steady for November.

Among the visitors Thursday was Sarah Lorcheim, of Atlanta. Shivering, she said she first visited the top of Pikes Peak around 2010.

The construction certainly caught her eye. “It’s going to be beautiful,” she said.