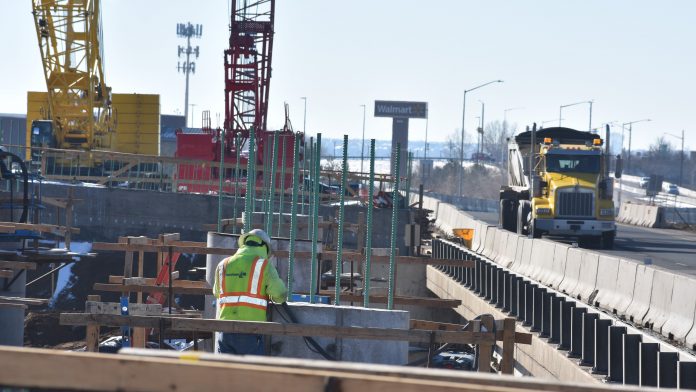 Those cranes will be used to move bridge girders into place Monday or Tuesday as part of the project to raise the bridge over Interstate 25 above a 100-year flood water level, allowing the Poudre Trail to connect underneath. The widening will accommodate an I-25 toll lane in each direction.

The construction is part of the Colorado Department of Transportation’s $750 million North I-25 Express Lanes Project stretching 19 miles from Colorado Highway 56 near Berthoud to Colorado Highway 14 in Fort Collins.

Crews started prepping for the Poudre River bridge in November. In recent months, they have built bridge piers and abutments, built embankments and fortified the banks of the Poudre River with rip-rap.

To allow construction to take place, crews built a makeshift dam with culverts across the river. They started construction in the river channel when the flow was lowest and will be out before spring runoff increases the flow.

Bus slips: North I-25 project to add 2 hubs for buses right on interstate

Crews are currently working on the northbound bridge. When that is completed, they will widen and raise the southbound section.

The concrete deck of the bridge is scheduled to be poured in about a month, said Jared Fiel, CDOT’s communication manager for the area.

Fiel said the trail will be constructed on the south side under the bridges. CDOT will build the concrete trail within the right-of-way. Other entities will be responsible for connecting the existing trails to the CDOT section.

Meegan Flenniken, the Larimer County Parks and Open Spaces’ land conservation, planning, and resource program manager, said the county has its trail alignment in place and is awaiting the permitting process. She said construction will begin in 2022.

Easements need to be secured in other areas.

The bridge and trail are expected to be open in 2023.

The 45-mile paved trail from Bellvue northwest of Fort Collins to Greeley has been in the making for about 40 years. Only three gaps on either side of I-25, totaling 4.7 miles, have yet to be built. Funding for that final section was secured with the help of a $2 million Great Outdoors Colorado grant.

The Poudre River bridge, as well as I-25’s Big Thompson River bridges south of U.S. Highway 34, were flooded during the 2013 flood.

The project includes the widening of multiple bridges as well as interchange overpasses.

I-25 through Colorado was originally built in the 1960s.

Crunching the data: What North I-25 construction zones see the most crashes