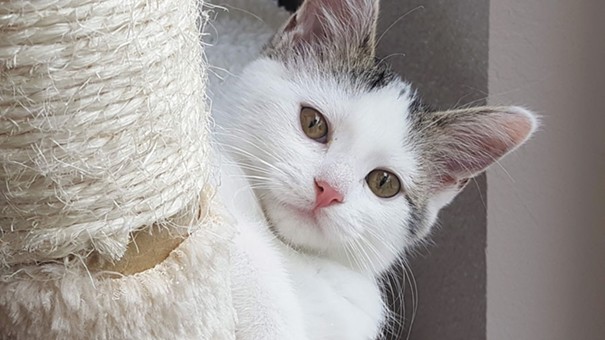 When Jennifer Nosler and other volunteers with Look What the Cat Brought In entered the elderly woman’s home, they found the property overrun with cats.

“We trapped and neutered 75 cats, some of them barn cats,” Nosler recalls. “We found barn homes for some of them. Some were the best pets imaginable.”

The nonprofit’s volunteers decided there were so many, they’d name them after elements on the periodic table, such as dysprosium and neodymium.

“I ended up adopting Hydrogen myself,” she adds.

The rescue underscores the need for Look What the Cat Brought in, a mostly volunteer group that runs a cat shelter at 2129 E. Boulder St., the first in Colorado Springs, started in 2008 by Nosler.

After she became an empty nester, the retired attorney decided to find a way to serve the community. Given her experience volunteering for a cat rescue in Austin, Texas, Nosler decided to launch a similar operation here.

Her first priority was to assure that shelter cats had good pain management after spaying, neutering and other essential procedures, because at the time, it wasn’t common to provide such relief.

“Now, it seems like, duh,” she says. “But 12 years ago, it wasn’t such a big deal. Cats were under anaesthesia for surgery, but when they were recovering, they weren’t given pain medication by the owner.”

Look What the Cat Brought In, with space for 150 cats, serves as a back-up shelter for the Humane Society of the Pikes Peak Region.

“We  take cats from the Humane Society when they need more time to adjust to shelter life,” she notes. “These are usually owner-surrendered cats that are simply terrified or temporarily aggressive.”

The nonprofit also accepts referrals from the Humane Society, she says, for cat owners considering surrender for behavior problems. “Our behaviorist works with the owners in those cases to try to change the problematic behavior, so the cat can stay home.”

Over the years, Nosler estimates the agency, with about 50 volunteers, has cared for several thousand cats, which have all been adopted.

Nosler says the nonprofit doesn’t accept stray cats, because the Humane Society serves the purpose of animal control. But there are exceptions, such as a mother cat with kittens.

“We will take the cat in immediately just to get it out of the weather,” Nosler says. “Generally, they’ve been abandoned, which is really cruel.”

The nonprofit works with pet stores and relies on word of mouth to find homes, charging nominal adoption fees for older cats and $125 for those under 6 months old.

Nosler’s group’s latest addition is a van that contains all the supplies needed to perform spays and neuters at the shelter, which is more efficient than taking the animals to a vet’s office. The nonprofit relies on four volunteer veterinarians, chief among them Aspenwood Veterinary Hospital, 1030 S. 21st St.

“We will be able to have more of our cats altered at one time,” Nosler says.

Later, the nonprofit hopes to expand to provide the service for owned cats at a nominal fee and, ultimately, trap, neuter and release feral cats.

As for the Fountain home overrun with cats, volunteers rounded up 30 from inside and 45 outside.

“We kept finding litters of kittens outside,” Nosler says. “We did catch all the cats and got them adopted or placed in barn homes. Even though it was heartbreaking work, it was rewarding to know we’d accomplished something and solved a problem.”