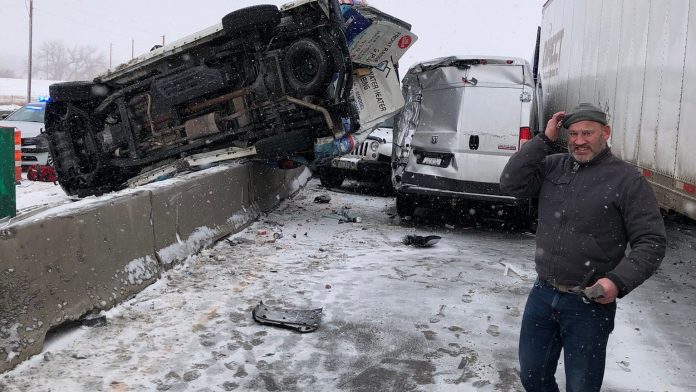 The crash occurred south of Loveland on I-25 around 12:38 p.m, closing down northbound lanes in the area and a nearby frontage road. The closure lifted around 5 p.m.

Drivers can use Colorado Highway 402 as a detour but are advised to avoid the area if possible.

Calls coming in to state patrol indicated there were roughly 15 vehicles involved, but the agency could not confirm that number or provide an estimate for how many vehicles were involved in the crash.

Loveland Fire Rescue Authority said on Facebook that more than 17 vehicles were involved, including three semitrailers, five large vehicles and “multiple small passenger vehicles.” The six people who were taken to area hospitals had minor injuries, according to the post.

The agency said more than 35 rescue personnel from various agencies responded to the crash.

This is the second major crash to close I-25 in the same area in recent days. On Friday, the driver of a Jeep SUV was pinned in his vehicle between two semitrailers on the Big Thompson River bridge near Loveland.

The early morning Friday crash caused a seven-hour closure of northbound I-25 lanes and five-hour closure of southbound lanes between Highway 402 and U.S. Highway 34, according to earlier Coloradoan reports. No one was seriously injured.