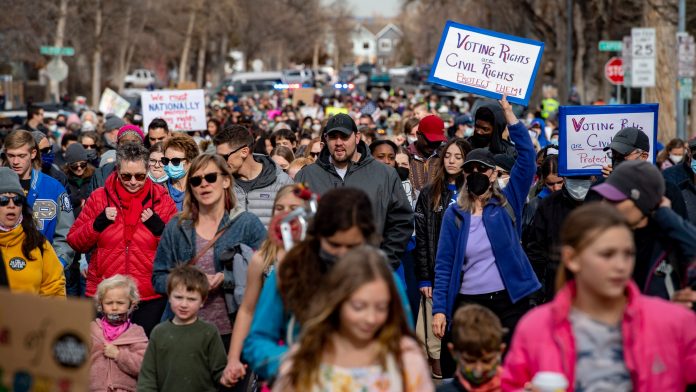 Hundreds in the Fort Collins and Colorado State University communities gathered Monday to celebrate Martin Luther King, Jr. Day with a march through the city — themed “The March is Far From Over” — and a keynote address from Carlotta Lanier, a member of the Little Rock Nine.

Lanier, who spoke at CSU after the group marched a newly-designed route passing the houses of Black families who put roots down in northern Fort Collins in the early 1900s, spoke about her experience as one of the first students to integrate an Arkansas high school and to the power of standing by what one knows is right, as she said King did.

Lanier was the youngest of the nine Black students to attend classes at Little Rock Central High School in Arkansas in 1957. When she and the others first attempted to go to their new school they were blocked by the law enforcement and a mob of people fighting the integration of the school.

“The truth is I never set out to do anything heroic when I signed my name on a sheet of paper, agreeing to becoming one of the first Black students to attend Central,” she said. “I just wanted the best education possible.”

She said that, despite the Supreme Court agreeing that segregated schools had led to unequal education among students, she “could not have imagined the hatred” directed at her. Months before her graduation Lanier’s house was bombed. She was able to persist, though, and “found the fortitude” to not back down from embracing her call to serve humanity.

Lanier also spoke of when she met King during her time as a student, and said her memories of him are not as an eloquent speaker or civil rights icon, but as a man eating ribs and drinking beer, which she added is an important way to remember leaders.

“I think we sometimes want our heroes to seem superhuman,” she said. “But when we see Dr. King in that way, it gives us fewer excuses. We all have gifts and talents and we have to ask ourselves how are we using them?”

She encouraged the crowd to “keep fighting the good fight” and use their talents to better mankind, as she said King did.

“It is the job for all of us,” she said. “King told us that he might not get to the promised land with us. But we as a human race will get there and we need to do so together.”

To introduce Lanier, local leaders including Fort Collins Mayor Jenni Arndt and Poudre School District Superintendent Brian Kingsley spoke of the ongoing fight for justice. Before and after Lanier’s address, CSU community members gave song, spoken word and dance performances to remember all of the Black lives lost since King’s death and to honor the community as they continue to fight for change.

Jeff Dodge, spokesperson for CSU, said the university estimated there were about 1,500 people at the march and 600 at Lanier’s keynote address. Sarah Lindahl, a Front Range Community College assistant director who helped plan the march, said she was “unbelievably happy with the attendance,” especially as COVID-19 surging in the community again caused uncertainty.

Andrew Brown, a CSU student who participated in the celebration, said the events of the day were a reminder that the holiday was not a day off.

“We see this as a day of action, not a day of rest,” Brown said. “For me, why spend the day off when you can be doing something for the holiday?”

Melissa and Vinnie Johnson brought their two young children to the celebration Monday in hopes that it would help them understand the importance of the holiday and, like Brown, know that it’s “not a day off,” especially in today’s climate, said Vinnie.

“Certainly, Martin Luther King’s legacy still exists. And we have to protect that because a lot of the things that we take for granted are still in jeopardy… so that’s the reason why we’re here, to continue to make sure (the legacy) isn’t forgotten,” he said.