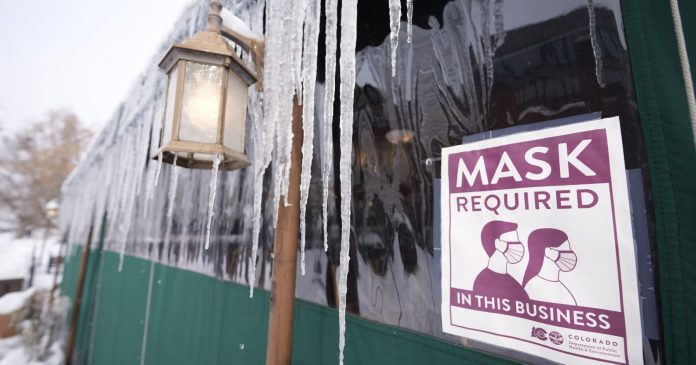 There are fewer Coloradans hospitalized with COVID-19 now than at any point since early October as the omicron wave continues to rapidly subside, a decline that state officials hope will shepherd in months of pandemic calm.

COVID-19 infections, which just 30 days ago were more than twice as high as they’d ever been, are now below peak levels of the state’s other two major waves, in late 2020 and 2021. While the state’s positivity rate remains high, it, too, has fallen significantly since omicron peaked a month ago. There were 861 Coloradans hospitalized with COVID-19 as of Wednesday, the fewest since Oct. 3, and a decline that’s led to stabilized hospital bed capacity after an unprecedented shortage at the end of 2021.

Still, 861 hospitalizations are high, state epidemiologist Rachel Herlihy told reporters Thursday, and the state “has a ways to go with getting those numbers down.”

Fortunately, signs point to the state being firmly on that path. So many people were infected during the omicron wave that state modelers project that 80% of the state will be immune to this latest, highly transmissible variant later this month. That, coupled with Colorado’s relatively high vaccination rate, should give Colorado a breather from the sizable pandemic waves that have hammered hospitals and the population since August.

The wrinkle, Herlihy and COVID-19 incident commander Scott Bookman said, is any new variant that may emerge in the coming weeks or months. Omicron surged just as delta was beginning to drop after months of increases. As other public health officials have cautioned of late, Bookman noted the unpredictability of the virus.

While the news and projections are good, “simultaneously we do want to say we don’t know what will come next,” he continued. “The science on this virus is continuing to evolve. So we do want to make sure that people know that while the next few months look very promising, it is possible we will come back to you at another point and have to talk about what measures do we need to take.”

He said it was “likely” that people would need to get additional doses of the vaccine in the future. He recommended people continue masking, as indoor face-covering mandates have largely vanished from across the state and the state has eschewed enacting any such requirement of its own for nearly a year now.

Though the overall COVID-19 picture is improving, particularly in relation to the strain on hospitals, Coloradans are continuing to die of the virus. As of Wednesday afternoon, 11,924 residents have been confirmed as having died from the virus since the pandemic began. There’s a data lag in reporting those numbers, so paring down exact dates of death is difficult.

But the state has reported about 1,000 deaths per month since October; a third of Colorado’s COVID-19 fatalities have been confirmed in just the past four months. The state reported at least 150 deaths per week between Oct. 2 and the end of January; more recent numbers are almost certainly going to grow in the coming weeks as data is backfilled.

State health officials have said that unvaccinated Coloradans are 59 times more likely to die of the virus than residents who are fully vaccinated and boosted.