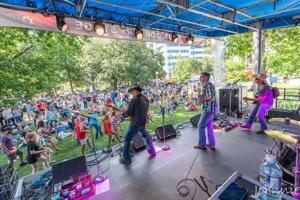 Along with leading a rock band, Jim Greer knows a thing or two about wedding websites.

“Have you heard of The Knot?” Greer asked during a recent interview with The Gazette.

The Knot, for those not as in the know as Greer, is a wildly popular wedding planning website that helps couples with all the details of their big day. He brings it up because the website named his band, Narrow Gauge, one of the best wedding bands this year, an honor given to only 12 groups out of hundreds.

It’s a big deal for Narrow Gauge, a Denver-based country and rock group that has played more than 300 weddings in Colorado and neighboring states.

Price: Tickets, $20, are available at bootbarnhall.com.

But it’s not the band’s first award. Not by far. Since forming in 2001, Narrow Gauge has been recognized several times by Gigmasters and the WeddingWire.

The best compliment for Greer comes from reviews people leave, saying things like, “They know how to get the party started.”

That’s always the goal at their frequent wedding gigs or corporate events.

“We figured out that those kinds of shows were a way better money and way better hours,” Greer, the band’s manager and lead guitarist, said. “Everything about it is better.”

The band doesn’t play many club shows anymore. So that makes their upcoming show at Boot Barn Hall something special. Greer has been a fan of the Colorado Springs venue since playing during its grand opening in 2019.

“Whenever they call us, it’s like, yes,” Greer said.

He was extra excited to say “yes” to playing a show on Saturday, following a “horrible year for music.”

Narrow Gauge typically plays up to 90 shows in a calendar year. Since the coronavirus pandemic began, they have played six shows.

Greer says things are starting to look up. And their calendar of shows is starting to fill up.

“There’s a magic that takes place on stage creating music with a crowd of people,” he said. “It’s like a drug. It’s addicting. And we’ve missed that.”

For Greer, that’s something he learned at a young age. He’s played music since he was 13, when his sister’s punk rock boyfriend lent him a guitar.

“When I found that guitar, that was my thing,” Greer said. “I quit baseball and football. I didn’t care about anything else.”

That led him to a life of music. After the Southern California native moved to Colorado, he found a band ad at a music store promising a paycheck of $600 a month. It’s just what Greer was looking for. Except that the band —called Narrow Gauge — played country music.

“I wasn’t into country music at all when we first put the band together,” he said. “My whole life, I had mocked country music.”

As he learned some country songs, though, Greer found the guitar parts more challenging than anything else he’d played. He was quickly impressed.

“And now I love country music,” he said.

Narrow Gauge now plays a mix of country and rock hits. And they’re very picky about what songs.

“It’s got to be a song people can dance to,” Greer said. “That’s the number one thing.”

Some recent set list additions include “1, 2 Many,” by Luke Combs and “Why Don’t We Just Dance” by Josh Turner.

In case you can’t tell, Narrow Gauge wants to get people grooving. And that’s tough right now, as dancing is restricted due to COVID-19 safety precautions.

And, like Greer said, that will happen again someday.