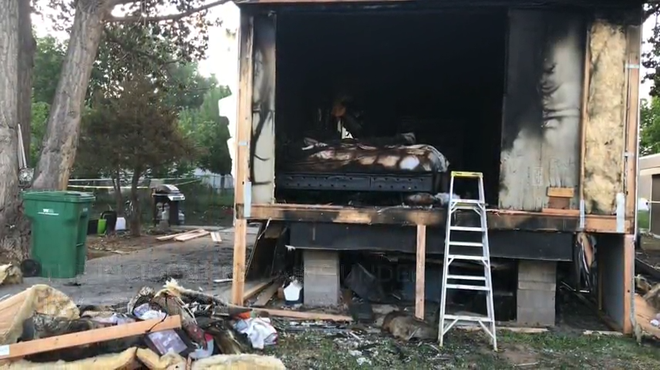 A man who police said threatened to kill a woman was found dead after an explosion in the Harmony Village manufactured home park Monday evening.

Fort Collins police said they received a 911 call regarding a disturbance at one of the homes on 2500 E. Harmony Road. The community is located directly west of Front Range Village shopping center.

Prior to police being called, one of the community’s residents had gone to one of her neighbors and told them that a male she knew came over, assaulted her and said he was going to kill her, according to a release from Fort Collins Police Services.

The residence that the woman left exploded and caught fire while officers were on their way to the scene. Poudre Fire Authority responded to the call at 6:48 p.m., according to the PulsePoint app.

Behind the scenes:How the Coloradoan reports on crime

When firefighters and officers arrived, the home was fully engulfed in flames. A deceased person — believed to be the man the woman said attacked and threatened her — was located inside the residence, police said.

The decedent’s name, cause and manner of death will be released by the Larimer County Coroner’s Office.

Concerns about the explosion prompted evacuation of the surrounding residences. The Northern Colorado Bomb Squad responded and determined the scene was safe.

Detectives with Fort Collins Police Services are now in charge of the investigation.

Anyone with information, who has not already spoken to police, is asked to call Detective Adam Braun at 970-221-6580. People who wish to remain anonymous may contact Crime Stoppers of Larimer County at 970-221-6868 or www.stopcriminals.org.