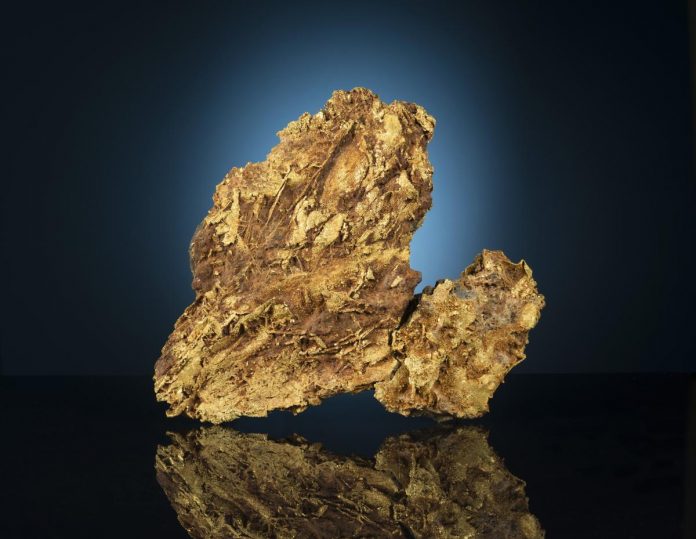 In July 1887, Tom Groves and Harry Lytton were prospecting for gold near Breckenridge. They found more than they bargained for: a 13.5-pound nugget of crystalline gold, the biggest one ever found in Colorado.

Groves swaddled it in a blanket for the trip back into town, then paraded it around the streets of Breckenridge like a baby — thus, Tom’s Baby.

After that rollicking night, Lytton and Groves sold it, and Tom’s Baby traveled by train to Denver. From there, the history gets a bit fuzzy, says James Hagadorn, the curator of geology at the Denver Museum of Nature & Science. As of the early 1970s, no one had seen Tom’s Baby for decades. Where did it go?

As the story goes, Tom’s Baby was part of a collection donated by museum founder John Campion in 1900.

“It turns out the museum owned and had that piece, and it was placed in a vault downtown during the Second World War,” says Hagadorn. “People with positions change over time, and institutional memory disappears. That is essentially what happened at the museum.”

Hagadorn wrote about the rediscovery of Tom’s Baby for the “Denver Museum of Nature & Science Annals” in 2013: “The Reverend Mark Fiester of Breckenridge was writing a book in 1972 on the history of Breckenridge and began to wonder about the Campion gold material at the Museum. He was particularly interested in the specimen known as Tom’s Baby, which had not been displayed for several years.”

Jack Murphy, the museum’s curator of geology at the time, learned of a crate stored in the vaults of the First Denver National Bank downtown. “[The museum] got a call saying, ‘Hey, we have this crate in the basement here and it has your name on it,'” says Hagadorn. “The curator of geology found the keys to this and went down there with a volunteer to go take a look at this thing. Sure enough, it was Tom’s Baby.”

It follows that, in 1974, the museum put Tom’s Baby back on display for the first time since 1930. “A lot of institutions during the Great Wars put commodity-type things that were of great value in the basement or in a safe or in a bank vault to be cautious,” notes Hagadorn. “That’s when they discovered that there was a piece missing and wondered where it went. It’s part legend, part lore.”

Tom’s Baby had lost about three pounds since 1887. Hagadorn says the missing chunk has the makings of a blockbuster movie. “Who knows? Maybe it’s hidden somewhere. Maybe they should make the next ‘Ocean’s 14’ movie about this.”

The diamonds at the center of ‘Ocean’s 13’ were worth $250 million. What’s the street value of Tom’s Baby?

“Gold is valued partly based on its weight, then there’s a bunch of multipliers,” says Hagadorn. Notable history or ownership “can multiply that value by five- or twenty-fold,” he says. “Then, if it’s from an iconic institution, that’s also worth more.”

“The last multiplier is the shape,” says Hagadorn. “There are lots of gold pieces that have a nickname because of their shape. Kind of like seeing giraffes in the clouds, people see shapes in the gold.”

Tom’s Baby has all of these multipliers, “so the math on its value is very hard to do,” he notes. “It’s like the Citibank commercial: priceless. The major museums of the world would fight over getting it.”

So would the museum sell it in the event of a cash crunch? Not a chance, says Hagadorn. “That belongs to the people. It’s your piece. That’s my neighbor’s piece of gold, that’s my kid’s gold, it’s your grandmother’s gold. It’s a piece of Colorado history and the reason it’s in the museum is so everyone can see it and enjoy it.”

At 389.4 troy ounces, the largest intact piece of gold ever found in North America is the Boot of Cortez, adds Hagadorn. Tom’s Baby is less than half that size, but easily the largest extant nugget unearthed in Colorado.

“It’s a monstrous piece of gold,” says Hagadorn. “Most living and practicing geologists have never seen a piece of gold that size. The only places in the world you see gold pieces of that size with some frequency is in Australia.”

Beyond its sheer size, Tom’s Baby is not your typical placer gold separated from other sediment. “Most of the gold from Breckenridge and that whole region of Colorado has a crystalline structure to it that you can see with your naked eye,” explains Hagadorn. “The crystals are like little pyramids, so the light glints off of them and shimmers and looks very much like scales on a fish. It really has a beauty to it and a sparkliness that is very different than gold from Alaska, Georgia, California or other places.”

Not that size doesn’t matter, especially today. “Most of the big pieces of gold, at least in Colorado and the West, were mined out back in the day by the miners in the 1800s,” says Hagadorn. “They were really, really good at getting big pieces of gold, and diamonds and other things, out of the ground.”

Most modern gold mining involves a cyanide-based chemical process to extract it from low-grade ore. “Miners don’t go and find a vein and keep digging and following it like making a tunnel in Dig Dug (video game),” he says. “There are still veins of gold in the mountains, but they’re deep and it isn’t economical to go and do that.”

But are there still other hunks of gold the size of Tom’s Baby in the Rockies?

“There are definitely Tom’s Babies out there waiting to be cradled,” answers Hagadorn. “If someone is really patient and has a lot of support and is really good at mining, they could find one. Maybe 30 years from now we’re going to use a tunneling laser and just go right in there and find it. Wouldn’t that be awesome?”

Tom’s Baby is on display at the Coors Gem and Minerals Hall at the Denver Museum of Nature & Science.