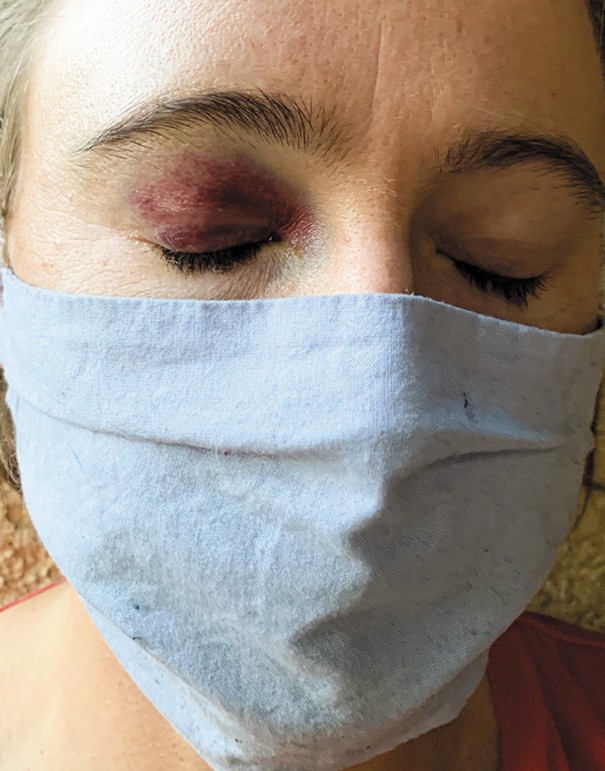 While covering local protests against police brutality, I’ve seen for myself the violence that has sparked these demonstrations across the country. The people who have been gassed, sprayed, beaten and arrested are experiencing firsthand what the Black community has been trying to tell us for the better part of a century.

The LGBTQ community is no stranger to conflict with law enforcement. Pride Month celebrations have largely been canceled this year due to COVID-19, but Pride commemorates the Stonewall Riots of 1969, during which New York’s LGBTQ community, led by trans women of color like Marsha P. Johnson and Miss Major Griffin-Gracy, fought against the New York Police Department and laws that criminalized homosexuality and cross-dressing. During the Black Lives Matter protests here in Colorado Springs, a number of members of the local LGBTQ community have come out to support protesters — and have themselves been arrested.

I joined the protest around 7:30 p.m. on Tuesday, June 2, at City Hall, where leaders reiterated the main themes of the event: remembering George Floyd, Breonna Taylor, Tony McDade and a litany of other Black Americans dead from police violence; and pushing the crowd to take action, to vote and to demand accountability measures for local law enforcement.

Jeffrey (we are omitting last names due to sources’ fears of retaliation), a 19-year-old who snuck out to attend the protest because his parents wouldn’t let him go, told me he came out because he was “sick and tired of my Black brothers and sisters getting unjustly abused by law enforcement in this country.”

As the main organizers left for the day, the crowd milled around City Hall and grew restless, and then began marching south on Nevada Avenue at 10 p.m. (This was before a citywide curfew went into effect on June 3.)

At 10:17 p.m., the crowd arrived at the Colorado Springs Police Operations Center, the site of previous violent confrontations between CSPD and protesters. Throughout the day and into the evening, there was no sign of illegal activity — none of the vandalism or property destruction that marred the protest only days earlier. The protesters simply arrived, filed in behind the barricades and confronted the phalanx of riot control officers awaiting them.

At 10:45, Lt. Joel Kern, his voice amplified by a bullhorn, declared the gathering an unlawful assembly and sent dozens of protesters running. The riot cops moved forward, and someone in the crowd threw a water bottle. A girl approached the line of riot police and smacked their shields.

“What are you gonna do? Pepper spray me?” she asked. She was answered almost instantly with a steady stream of pepper spray directly into her face.

Moments later an explosion rocked the crowd. Someone had set off a firework mortar, and Lt. Kern ordered the officers to “surge.” Police cars arrived, seemingly out of nowhere. Officers began shoving protesters and shouting, “Move!” I watched an officer kick the side of a car after pepper-spraying two teenage girls, who were holding signs with their hands up.

It wasn’t just protesters who were targeted. KRDO reporter Chase Golightly was pepper-sprayed by a CSPD officer, and bystanders were swept up by CSPD as well. I was at Nevada and Moreno avenues and saw, through tear-gassed eyes, a group of CSPD officers arresting a man.

“A guy, who was not part of the protest, was headed in the opposite way,” Michael, a witness, told me. “They stopped him, and a girl got in the way. She got pulled to the ground and she got tear-gassed.” When I asked what prompted that reaction from CSPD, Michael told me, “They were just blocking the path and he said ‘excuse me,’ and then they took him down.”

Though CSPD told FOX21 that they could not comment on video of this particular incident, CSPD Public Information Officer Lt. Jim Sokolik told me via email that “It is always our goal to use the least amount of force necessary. That is how we train our officers and why we gave numerous verbal commands over loudspeakers prior to any arrests or interactions with unlawful protesters. Again, we are here to protect our citizens’ first amendment rights, but when a crime occurs and lawful orders aimed at keeping the peace are ignored, we have to take action for the safety of our community.”

Ashley Taylor, a 31-year-old server, was the woman who got pulled to the ground. “I got very frantic, I was like ‘Hey, he’s [the bystander] not doing anything. Just turn around,’” she recalls. “He ended up getting tackled and I’m screaming frantically ‘He’s not doing anything! Leave him alone!’ At that same time an officer is pulling me away, he’s not explaining to me what’s happening, he’s not telling me if I’m under arrest or if I’m being detained. Next thing I know I’m getting punched in the head. He’s throwing me on the ground, and he eventually [pepper-sprayed] me in the face multiple times and then proceeds to put me in handcuffs and arrest me for obstruction of a peace officer.”

“Any use of force is going to be evaluated by the department,” notes Sokolik in response to inquiries about Taylor’s account, “if there appears to be a policy violation then that will be handled by internal affairs, but we wouldn’t discuss that process right now. Every use of force is documented.”

Since May 30, 37 protesters have been charged with “obstruction.” Elise, a 27-year-old transgender woman and social worker, was also arrested Tuesday night. “I think what I did was I walked too close, in between a cop and a young Black man screaming at the cop,” she recounts. “I was like ‘All right, this is where I want to leverage myself as a white person.’ I didn’t step up to the cop, I didn’t talk to the cop, I didn’t challenge the cop in any way. I’m just like, ‘This is where I’m going to put my body, in between you and this Black guy that you’re looking all menacing at.’”

“I must have been 4 or 5 feet away from him,” she says, “and he steps up and gives me one of those big, two-hand shoves just for approaching him instead of leaving.” Then she got pepper-sprayed.

“I got pepper-sprayed long enough that I thought to myself, ‘Damn I’m still getting pepper-sprayed,’” she tells me. “My hands burned for 24 hours.”

“I’m walking east on Cimarron [Street],” she continues, “I’m not running because I can’t see. I’m trying to run and I get tackled from behind. I have abrasions on both hips and my knee. Absolutely no warning. No verbalization of ‘you’re under arrest.’”

Being arrested as a transgender person is an unpleasant experience, to say the least. “They clocked me as trans at least when I got out of the squad car. They pulled us out of the car, and it was a young woman officer who they sent up to ask, ‘I’m trying to ask this in the most respectful way possible, but are you a guy or a girl?’” says Elise.

“At this point they’re trying to figure out who is going to decontaminate me and where I’m going to stay, and then they ask, ‘What parts do you have?’ I said I was pre-op and she asked me, ‘Cut or uncut? Do you still have it?’ At this point I’m in the back of the cop car, it’s covered in puke because this guy keeps puking, and this woman is standing in front of me [implying] that I’m going to be cuffed, pepper spray on my face, puke all around me, until I disclose my genitals.”

Elise explains that usually trans people are housed in solitary, “which isn’t great,” she says, “but they couldn’t even do that because all their solitary cells were for COVID quarantine right now. I jumped through every hoop, before the Birth Certificate Modernization Act, to get ‘F’ on all my forms of identification, and in the time I would have really appreciated being sorted into ‘F’ instead of ‘M’ the most, they’re still stripping me naked and evaluating me based on that.”

El Paso County Sheriff’s Office, which is the agency responsible for processing and housing people after arrest by CSPD, says Elise’s account is not consistent with their standard operating procedures, and adds that “From the statements made, it is hard to distinguish who, and from what agency made the comments” about Elise’s genitals.

While getting booked, Elise says she was questioned by the FBI. “They asked me, ‘Who organized it? How did you hear about it? Did you see anything out of the ordinary?’ She wanted to talk about the mortars and the dudes with long guns.”

Taylor also says she spoke with the FBI. “The FBI did come in and try to ask me questions,” she explains. “They were trying to get information on if I knew who the organizers were and if I knew of any affiliations that might be outside of the Springs.”

I asked the FBI’s National Press Office about their activities in Colorado Springs, and spokesperson Amy Meyer responded: “Unfortunately we cannot provide comment regarding your inquiry at this time.”

As a result of her treatment by CSPD, Taylor sought medical attention. “I’ve had excruciating pain on the left side of my head since all this happened,” she says. “I did go down to the Urgent Care and found out that I do have a concussion from the cop punching me.”

Since the Tuesday night protest, protesters have avoided the Police Operations Center, and have had largely peaceful protests without incident.