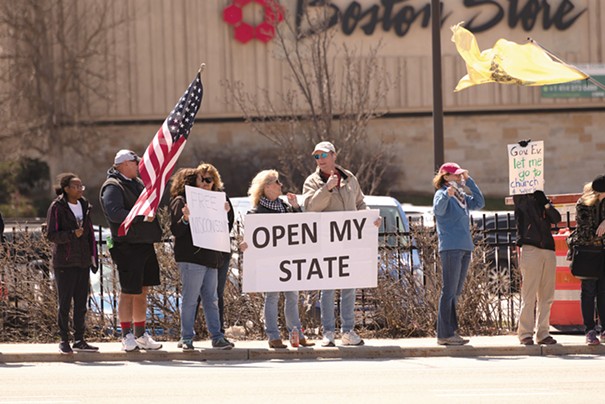 So there was a reopen-the-economy demonstration at the state Capitol this weekend. I have no problem with protesters. In fact, back in my youth, I was on pretty intimate terms with the not-so-sweet smell of tear gas in the morning.

But this protest was dangerous. I know it’s sort of counterintuitive to the very idea of protesting that you worry about taking precautions — like, in this case, maybe staying in the car instead of marching in the streets. But from the data we have, it’s fair to guess that a certain percentage of protesters were COVID-19 positive, even if they were entirely asymptomatic. And by walking around, they could have infected others, which is the basis for the statewide stay-at-home orders. And yet this didn’t appear to change minds.

In fact, the president is now on record encouraging these protests against, as it turns out, mostly Democratic governors. That may not fit neatly into Trump’s April 16 acknowledgment that it will take some time for the country to reopen for business despite the very real and very serious economic costs. But it fits precisely into Trump’s strategy of blame — that is, blaming someone else.

And then there’s this small irony: No one in the state is more eager to reopen Colorado for business than the governor, Jared Polis. And yet, many Colorado Republican leaders seem to have missed that point, with some actually calling Colorado a police state. I’d like to introduce them to what police states look like.

House Minority Leader Patrick Neville took it another step altogether, saying Polis’ policies could lead to a “Gestapo-like mentality.” Seems like Neville may have some serious gaps in his knowledge of history — and that either he didn’t know or just didn’t care how Colorado’s first Jewish governor, who lost family in the Holocaust, might react to being compared to Nazis.

But, in brief, the Gestapo, among their other loathsome duties, helped round up Jews and other so-called undesirables and send them to death camps. Polis, meanwhile, is asking people to stay indoors or wear masks if they need to leave the house.

The blame game is now in full force. Trump is back to blaming governors, as you might expect. We know he’s blaming the Chinese (guilty as charged) for not informing the world quickly enough of the novel coronavirus. And yet, Trump was praising China’s response long after the virus became public knowledge and, in any case, long after his own intelligence people had briefed him. Trump is also blaming the World Health Organization (also guilty as charged) for being too China-centric and dictator friendly, although Trump, well, see above. And I can’t help noting that long after WHO issued full-blast warnings, Trump was still likening the coronavirus to the flu and saying it would likely go away by April or by miraculous intervention.

And now Trump, in his Trumpiest move yet, is aligning himself with insurrection — or at least protests that defy stay-at-home orders — in a tweeting trifecta:

Glad we got the Second Amendment in there. Maybe he’s talking armed insurrection, but I can say that not everyone thinks it’s funny. Here’s what Washington Gov. Jay Inslee tweeted, in part: “The president is fomenting domestic rebellion and spreading lies — even while his own administration says the virus is real, it is deadly and we have a long way to go before restrictions can be lifted.”

Trump’s support for protesters — I’m old enough to remember when he wanted to punch those protesting at his rallies — was first registered in his April 16 press briefing when he refused to say whether he’d advise the protesters to stay home. That’s the briefing in which he conceded, without actually conceding, that as president, he doesn’t have “total” power and can’t “call the shots” in reopening a state’s economy. It was only the day before that he was totally saying that total meant total.

In reading the Trump administration’s three-phase suggestions for reopening the economy, doctors and scientists felt the need to note that the guidelines called for far more testing than we’re now capable of doing and far, far, far more contact tracing than we’re now capable of doing. Reopening won’t be easy and, however well you do it, people will die. Which is why, you might guess, that Trump gladly reversed himself and handed the job back to the governors.

But while telling governors to call the shots, he failed to provide any bullets. He said it was up to the governors to find the needed supplies, ignoring the fact that the only entity capable of achieving that supply scale is the federal government, which has utterly failed. Instead of taking action, Trump acted as if he believed he could talk the virus away.

Speaking of Trump beliefs, you may have noticed that he doesn’t talk much any more about the supposed benefits of hydroxychloroquine in treating coronavirus patients. His gut may have shut down on that one. There is, however, potentially good news on that front, with some early evidence — very early — that an experimental drug called remdesivir could possibly be helpful. The markets did jump at the news.

There is also bad news, though. Some rural states where there had been smaller numbers of infections have seen their rates shoot up. According to data compiled by The Johns Hopkins University, Iowa saw an 82 percent jump in cases in a week, Nebraska a 74 percent jump, Arkansas 60 percent, and Oklahoma 53 percent. And we already knew that South Dakota had become a hot spot. Its numbers jumped 205 percent in a week. The common factor is that each of these states has not issued a stay-at-home directive.

As Trump’s favorite sparring buddy, Andrew Cuomo, put it in his coronavirus briefing Friday: “The federal government has passed three bills to address this crisis. Of those three bills, the state governments have gotten precisely zero, zilch, nada in unrestricted aid. That is passing the buck without passing the bucks.”

It is aid to the states and hospitals that Senate Democrats insist on adding to the Republican bill that would provide $250 billion to the small-business fund, which has already run out of money. Democrats favor finding the money for small businesses, but Mitch McConnell and Trump object to the Democratic add-on, which is strange because Trump’s re-election prospects are directly tied to how this pandemic plays out.

There’s an interesting piece in Vox by German Lopez on the difficulties of knowing when and how to reopen. It’s clear that stay-at-home orders and physical distancing have saved lives, maybe hundreds of thousands of lives. But if you’re doing it right, the doctors tell us, it always looks like you’re overreacting.

Lopez quotes Kent State University epidemiologist Tara Smith as saying: “It’s the paradox of public health. When you do it right, nothing happens.”

We know the pain accompanied with the shutdown of the economy. We know of the 22 million unemployment claims (including 104,000 in Colorado just last week), the heartbreakingly long lines of people in desperate need of food for their families, the likely loss of family businesses, the human costs of a deep recession.

But we also know, even as the curve seems to be flattening in some places, that the coronavirus has shown it often resurfaces. Dr. Tony Fauci says that safety must always come first in reopening economies. Meanwhile Donald Trump is calling on Americans to man the barricades — not against the virus, mind you, but against governors or, let’s be honest, anyone but him.