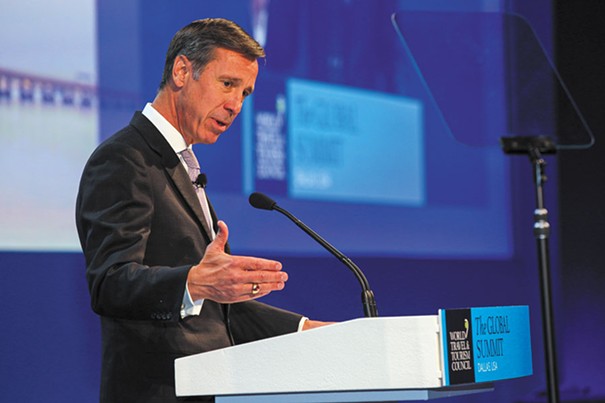 In this horrible time of economic collapse, it is truly touching to see so many corporate chieftains reaching out in solidarity with the hard-hit working class.

We know they’re doing this because they keep telling us they are — practically every brand-name giant has been spending millions of dollars on PR campaigns in recent weeks asserting that they’re standing with us, declaring over and over: “We’re all in this together.”

Except, of course, they’re really not standing anywhere near us. While we’re waiting in endless lines at food banks and unemployment offices, the elites are still getting fat paychecks and platinum-level health care. The severity and gross disparity of our country’s present economic collapse is not simply caused by a sudden viral outbreak, but by a decades-long plutocratic policy of intentionally maximizing profits for the rich and minimizing everyone else’s well-being. As the eminent economist Joseph Stiglitz rightly put it, “We built an economy with no shock absorbers.”

But just last August we were told that a new, more-democratic corporate ethic was emerging. The CEOs of 181 big-name giants signed a public pledge that henceforth they would run their corporations not solely to maximize shareholder profits but also to benefit workers, communities and other economic “stakeholders.” Then, only five months later — BOOM! — the pandemic hit, profits dropped, and the new magnanimous spirit of togetherness vanished from those corporate board rooms. Immediately, masses of their workers were being punted out the door, health benefits were coldly terminated just when needed most, and the pledge to serve the common good went into the shredder.

Well, retorted such pledge-signers as Arne Sorenson, CEO of the Marriott hotel empire, revenues are drying up, so all promises are negated. In a March video message dispatching most of Marriott’s employees, Sorenson cluelessly added this insult to their injury: “I wish you good health and a sense of optimism.”

A couple of weeks later, however, workers learned that while Marriott was cutting off their paychecks, it had doled out $160 million to its rich shareholders, a group that includes Sorenson.
In fairness, the CEO did say he’ll forgo some of his salary this year. But that’s a disingenuous show of solidarity, since he also gets some $11 million a year in incentive pay and other compensation. And, while workers are now consigned to the unemployment line, Sorenson is in line for a 7.7 percent pay hike next year, plus a multimillion-dollar cash bonus.

Jobs, once the measure of a family’s economic security, have steadily been shriveled to low-wage unreliable work, untethered to a fair share (or any share) of the new wealth that workers create. In a relentless push for exorbitant, short-term profits, today’s executives have abandoned any pretense that a corporation is a community of interdependent interests striving to advance the common good. Instead, while the honchos are richly covered, they’re washing their hands of any responsibility for the health, retirement and other essential needs of their workforce. “Rely on food stamps, Obamacare and other publicly funded programs,” they say, even as their lobbyists and for-sale lawmakers slash the public safety nets so rich shareholders and speculators can take ever more profit.

These forces of American greed have shoved millions of working families to the economic precipice — and all it takes is a virus to push them over.