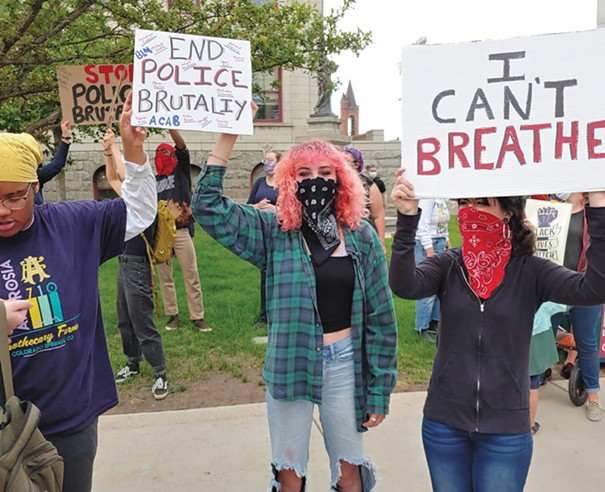 Viewing the video of George Floyd’s gruesome death, one word from him stuck in my head, one painful human utterance that conveys the horror of it all: “Mama,” Mr. Floyd cried out in desperation and disbelief as his life was cruelly and senselessly suffocated in yet another slaying by so-called “officers of the law.”

This can’t be America. Can it?

Yes and no. Certainly it can’t be the America we accept, one totally antithetical to our people’s deeply held democratic values of justice for all. Yet from the founding of the nation forward, the official knee on the neck of Mr. Floyd has been a common experience for African Americans, and also for Latinos, Native Americans and other people of color.

It’s that stark separation between the American ideal and reality — now so vividly and violently thrust in our faces — that has ignited such a diverse, massive and furious protest from coast to coast.

To me, this outpouring of public anguish feels different than previous ones, for the protesters are not only angry about what the power establishment did to George Floyd, they’re also angry for themselves. The intentional spread of inequality in America is now swamping the once-middle-class majority. So more and more people — especially among the young — are feeling the establishment’s knee crushing their opportunities and rights. More than empathy for the Black community, there’s now a shared inkling that the rise of autocracy and plutocracy is engulfing all but the moneyed elites, threatening America’s existence.

There’s a rising political awareness that today’s social order is corrupt and the system itself must be changed — not tinkered with, but fundamentally changed. And there’s a growing understanding that we really are “all in this together,” so we’ve got to stand up for George Floyd, each other… and the America we want.

Meanwhile, these mass protests against systemic racism are driving Donald Trump plumb crazy! Of course, that’s a pretty short drive for him.

He would be hilarious if his buffoonery were not so dangerous and destructive. For example, he had peaceful protesters gassed, clubbed and shoved out of the public square across from the White House so he could walk out and pose stone-faced with a Bible, as some sort of political stunt.

Especially dangerous, though, is the craven willingness of our top military officials to play along with his infantile attempts to appear manly. When Trump strutted out to do his little Bible photo-op, guess who was loping along right behind him, like eager-to-please puppy dogs? Secretary of Defense Mark Esper and Gen. Mark Milley, chairman of America’s joint military forces.

Yes, our nation’s top two war chieftains were adding their symbolic blessing to Trump’s pathetic desire to look tough, suppress our constitutional right to dissent, and militarize his claim of autocratic powers.

To their credit, dozens of U.S. military leaders immediately assailed Esper and Milley for even implying that the armed forces could be anyone’s political pawn to police our own people, and both have since retreated. But their willingness to toy with it shows how vulnerable our democracy is to autocrats.