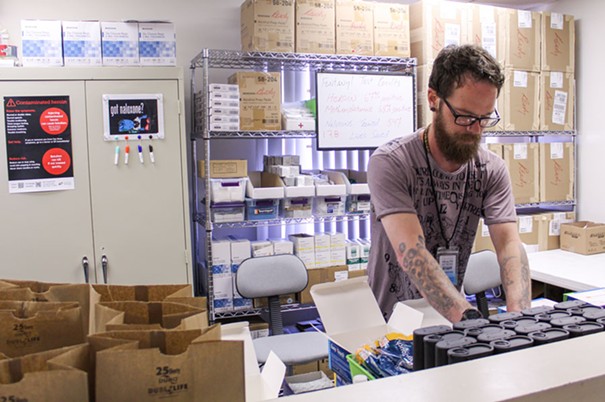 While the Colorado Assembly took a vacation, state lawmakers on the bipartisan Opioid and Other Substance Use Disorders Study Committee convened for the fourth year in a row.

Over several months, the lawmakers heard from those fighting on the front lines of Colorado’s addiction crisis — health care providers, nonprofit workers, patients with chronic pain and more.

And using the insight gained from those discussions, the committee on Oct. 29 approved five proposed bills that chart new territory in the realm of addiction prevention and recovery.

Why care about a batch of bills that haven’t even been introduced in the state assembly, which convenes in January? The answer: All of the bills proposed by the opioid committee in previous years have eventually become law.

And these new bills include an influx of funding for addiction recovery and treatment, and make sweeping changes to the way Colorado law addresses prescriptions, insurance coverage, criminal justice and harm-reduction efforts.

Let’s start with a legislative proposal that promises to rock the boat in El Paso County.

Ours is the largest metropolitan county in the state that doesn’t have a syringe access program (also known as a “needle exchange”), a harm-reduction strategy that allows intravenous substance users to safely drop off used syringes and pick up new ones — ideally helping prevent the spread of diseases such as HIV and hepatitis C.

Current law requires a local public health agency interested in launching such a program to secure the approval of the county board of health. In El Paso County, both the Board of Health and Board of County Commissioners have vehemently opposed a syringe access program for years, citing concerns of enabling IV drug use. But one of the committee’s proposals would remove the requirement for board of health approval, and allow a licensed hospital to operate such a program.

Amanda Smith, director of AspenPointe’s outpatient substance use program, says access to clean syringes is a major need for the nonprofit’s clients.

“If we could approve something like [a syringe access program], we would open that door to be able to help so many more people and help reduce stigma,” Smith says. Such programs not only help to eliminate infectious disease, but allow providers to connect clients with addiction recovery resources, she adds.

According to the Centers for Disease Control and Prevention, syringe access programs have been shown to decrease the risk of disease; increase entry into substance use treatment; reduce needle-stick injuries for law enforcement and members of the public; reduce overdose deaths; and save public health dollars.

Amber Ptak, the interim CEO of Pikes Peak Community Health Partnership, says her organization hasn’t taken a position on the bill. But she adds that CHP has been researching successful syringe access programs in order to provide assistance, from an educational perpective, if one is ever implemented in El Paso County.

“We respect the Board of Health as the current authority,” Ptak says. “If that changes for some reason, then we will absolutely work with a hospital if they are willing to volunteer to implement such a program.”

While eliminating board of health approval for syringe access programs may be sensational, that provision is just the tip of the iceberg when it comes to the proposed bills that left the interim committee.

The same bill that includes that provision — titled “Harm Reduction Substance Use Disorders” — also requires health insurers to reimburse hospitals for providing naloxone, a life-saving drug used during opioid overdoses. In addition, it allows pharmacists to sell syringes and needles without a prescription, and expands a grant program for naloxone distribution and other harm reduction programs.

But Sen. Brittany Pettersen, the Democrat from Lakewood who chairs the opioid committee, says the changes to insurance coverage requirements contained in a separate bill are among the most impactful proposals that came out of the committee.

“Right now, [insurers are] mandated by federal law to cover substance use disorder treatment,” Pettersen explains. “The problem is you could cover three days of detox and say that you provide treatment. … It’s like saying you cover cancer treatment because you go through the first round of chemo.”

So, another bill titled “Concerning Treatment for Substance Use Disorders” requires the state Medicaid program and private insurers to instead follow American Society of Addiction Medicine criteria, which Pettersen calls the “gold standard” for substance use treatment.

That same bill also increases funding (which comes from marijuana tax revenue) for a loan forgiveness and scholarship program for mental health and substance use providers, as well as addiction counselors.

Another critical issue the committee sought to address: The state’s severe shortage of housing for people who leave detox or inpatient treatment.

In that vein, a bill titled “Substance Use Disorder Recovery” increases the amount of funding from marijuana taxes that goes into a housing assistance program from $1 million to $5 million. That program, housed in the state’s Department of Local Affairs, provides temporary housing assistance for people receiving treatment for substance use disorders, or transitioning out of inpatient care.

That bill also appropriates funds for other grant programs related to substance use and mental health treatment, and, notably, requires the Department of Human Services to come up with new rules for determining whether a newborn child testing positive for a controlled substance consitutes child abuse or neglect on the part of the mother.

“Right now, in Colorado law, if your baby [tests] positive for drugs or alcohol, you immediately are charged with child abuse and neglect,” Pettersen explains. A rule change could allow the courts more discretion, she says, based on whether the mother has started treatment or gone into recovery.

Another bill, “Substance Use Disorder Treatment in the Criminal Justice System,” would transform the way jails and prisons provide care for inmates struggling with addiction.

El Paso County is one of several counties across the state to receive federal funding for a medication-assisted treatment, or MAT, pilot program for incarcerated people. MAT involves drugs such as Vivitrol, methadone and buprenorphine to help people manage their cravings and withdrawal symptoms.

“When you go through jail, [if] you don’t get the treatment that you need and then you’re sent back out in the same situation without any care, you’re going to go back to using,” with a lower tolerance that increases the chances of a fatal overdose, Pettersen says.

As part of state legislation that passed last year, jails and prisons across the state had to come up with a plan for providing MAT to every inmate who requested it. This year, the opioid committee’s criminal justice bill tasks them with implementing that plan — and ensuring that people don’t slip through the cracks when they’re released, by helping connect them with resources or reinstating their Medicaid, for example.

If a person has successfully completed a substance use disorder treatment program, the bill requires the courts to consider that factor favorably when determining whether to seal criminal records.

“This is part of them having the opportunity to actually start fresh and build a life and not be held back by their substance use disorder for their entire life,” Pettersen says.

The bill also increases funding for a diversion pilot program that connects defendants with a case manager instead of booking them into jail, and for a program that funds a mental health specialist and law enforcement “co-responder” team to dispatch to mental health-related calls.

A fifth bill — titled “Prevention of Substance Use Disorders” — continues prescribing limitations for opioids (no more than a seven-day supply for someone who hasn’t had an prescription in the previous year), requirements for insurers to cover alternate treatments such as physical therapy and non-opioid medications, and changes aimed at improving a program that lets doctors monitor a patient’s prescriptions.

Last year, 133 people in El Paso County suffered drug-related accidental deaths, a slight decrease from a high of 147 in 2017, per a report from the coroner’s office. But health workers agree that the problem isn’t going away anytime soon.

“Fifty-five percent of people who obtain an opioid prescription are receiving it from a family or friend from their medicine cabinet,” she points out, referring to CDC data.

Smith, of AspenPointe, says a severe shortage of residential treatment beds makes it difficult for patients to find the care they need.

AspenPointe is also seeing “a huge increase of methamphetamine use” in El Paso County, Smith says. “And that one, you know, is a little bit more challenging to treat because we don’t have medications to help with that.”

While use of methamphetamine doesn’t lead to fatal overdoses as often as do opioids, she says providers are seeing much heavier use of the former than of heroin and prescription opiates.

Sen. Pettersen has firsthand experience with the opioid crisis and it has shaped her approach to legislation, as her own mother struggled with addiction for decades. She acknowledges there’s considerable work to do in the realm of substance use prevention and recovery, but says that Colorado is making strides.

“We are leading the nation, quite frankly,” she says. “…We’ve really been a national example of the thoughtful and far-reaching policies that we need to pass.”