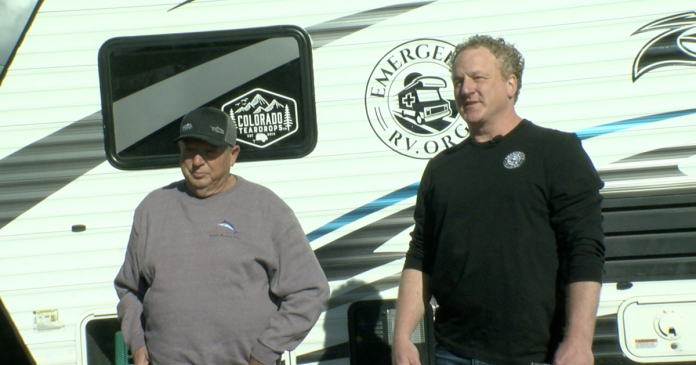 As a volunteer firefighter, he was unable to return home when conditions changed and his home was threatened. The fire destroyed his home. But it was the loss of his two dogs that was the most devastating.

“Their love was just unconditional,” he said. “It is very hard right now. They are not there.”

Even after the devastation, Piercy continued to help fight the fires.

“I still stayed because I didn’t want to see anybody else go through what I knew I was going through.”

After the flames subsided, he had nowhere to go. A colleague sent his story to Emergency RV, a nonprofit based out of Colorado that finds shelter for emergency responders who lost their homes in a fire.

“These guys are real heroes,” said Woody Faircloth, the founder of EmergencyRV.org. “We just don’t think it’s right after a fire, they have to try to find a place to live.”

On Saturday, Faircloth and his organization sent a temporary home to Piercy.

“He’s out there putting his life on the line every day for the rest of us. And so we find this at least we can do,” said Faircloth. “These are our neighbors. We just we want to help them.”