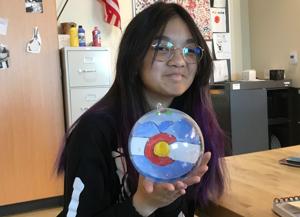 As this year’s official White House Christmas tree arrived Monday in a horse-drawn carriage, students from Grand Mountain School undoubtedly were thinking about a recent art project — even though it’s Thanksgiving break.

Twenty-five sixth-, seventh- and eighth-graders at Widefield School District 3’s new school, which opened this semester in the Lorson Ranch development, each created a Christmas ornament depicting a Colorado scene.

Grand Mountain is one of 56 schools across the nation selected to decorate one of the smaller trees that surround the annual National Christmas Tree display in President’s Park, south of the White House in Washington, D.C.

Each tree features ornaments representing one U.S. state, territory and the District of Columbia, as part of the “America Celebrates” display.

“The students were very surprised by it — it was an unexpected thing that became a big deal to them, to have their artwork in Washington, D.C.,” said Grand Mountain art teacher Danielle Selke.

The students’ most popular question?

“Is the president going to see them?”

Grand Mountain was chosen to represent Colorado this year based on old-fashioned networking, Selke said.

One of her former professors from the University of Northern Colorado in Greeley, where she graduated, also works for the Colorado Department of Education and asked Selke if she was interested in having her students take part.

This is the first time Widefield D-3 has had a school participate in the program.

Selke challenged student artists to think about “what makes Colorado our home.” The state flag immediately came to mind for many, Selke said, as did mountains, the state bird, the state flower, trees, buffalo and other outdoor images.

Using the school motto — “A school for the mind, a home for the heart” — students went to work, exploring various design techniques in terms of color, shape, space and texture.

Since there was a lot of interest, students submitted their designs for review before handcrafting the final pieces. Some students worked on their ideas for days, Selke said.

“I had students across all skill levels wanting to participate in the project, and they had total agency in their work as long as it centered around Colorado,” she said.

In the end, there were just over 25 designs, so some students volunteered to work together on their ornaments.

“Because of the choice and freedom that the students had, they are very proud of their work,” Selke said.

Through a partnership with the National Park Service, the U.S. Department of Education identifies elementary, middle and high schools whose students hand-make ornaments for the display.

More than 1,500 students nationwide are participating in this year’s project, which is funded by the National Park Foundation.

The description Grand Mountain School students submitted will be part of their decorated tree:

“We are very honored to be included in the 2019 National Christmas Tree Display.

“From our home to yours, Happy Holidays from Colorful Colorado!”