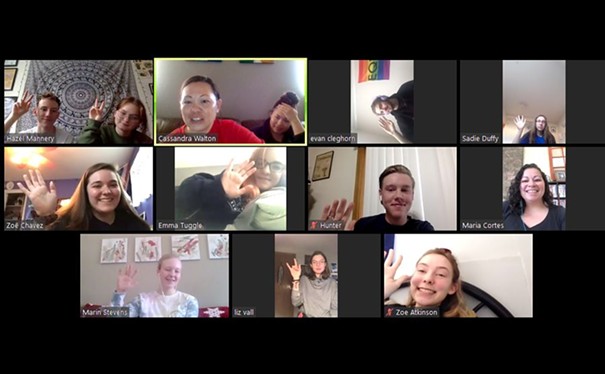 It’s not just missing out on big events — senior prom, championship games and graduation — that makes the COVID-19 pandemic difficult for teens stuck at home, says 18-year-old Kaihosha Hooper, a senior at Doherty High School.“It’s also just the small interactions, as well, that I think a lot of people have been missing,” Hooper says. “It’s really weird just being at home and not being able to see your friends every day or talk to your teachers in person.”

As a member of the Pikes Peak Suicide Prevention Partnership’s teen board, Hooper’s well-versed in the mental health needs of her peers. But the pandemic, which led to the closing of school districts until at least August, requires finding creative solutions to unprecedented problems.

“I like to be on TikTok,” she says, as her fellow board members giggle over a Zoom video conference. “The best thing I’ve found so far is … this whipped coffee thing where you, like, whip coffee, and it is so good.”

It isn’t all sunshine and whipped coffee, though.

“I know for us at the center, we’re getting increased calls from teens or parents related to their teens, because they already had struggles happening in their life,” says Cassandra Walton, executive director of the Suicide Prevention Partnership. “Maybe they were already dealing with depression or anxiety, and now … they’re really seeing an impact to their ability to cope.”

One major challenge: uncertainty about the future. After leaving for spring break, many kids didn’t know whether their schools would reopen in March, April or May. Now, graduation ceremonies and college orientations are in limbo.

“Lately it’s been a little bit more definite, like what’s happening — this is the delays that are happening, this is what’s going to go down — but these last two months, you have to check every day,” he says.  “…It’s kind of frustrating.”

For teens (and adults) feeling lost, the Suicide Prevention Partnership offers free counseling sessions, check-ins and virtual support groups. (See the box on the next page for more information on those and other local resources.)

In the meantime, experts say parents can take steps to mitigate some of the pandemic’s negative impacts on teen mental health.

“I think one of the most important things is just to listen,” says Dr. Diane Thompson, a psychiatrist at Centura Health in Colorado Springs. “Often teens and even younger children will say, ‘You know, I just want my parents to listen.’ They don’t always necessarily want feedback or instruction.”

Beyond that, Thompson says, parents should remember to ask their kids how they’re feeling and “let them kind of lead the discussion as opposed to assuming that we know what they’re thinking or what their concerns are,” or starting off with a lecture.

Parents should try to model mental wellness for their kids, she adds: “If a teenager sees Mom doing yoga, meditating, taking a walk, doing things just for her, that says to the child, ‘Mom thinks she’s important enough to take care of herself, the same way that I’m important and I need to take care of myself.’”

Outside of relationships with family members, it’s important for teens to find ways to stay connected with friends, says Zoe Atkinson, president of the Suicide Prevention Partnership’s teen board and senior at Mesa Ridge High School.

“We can’t say, ‘Oh, go hang out with your friends’ as a way to cope,” says Atkinson, 18, recalling how a psychology teacher had told her “the most important thing for teenagers is their relationships.”

“Now, the issue is finding some form of connectivity when you can’t touch people,” Atkinson says.

“I think it’s also important just in general to keep in touch with people you don’t typically,” Clouse says, “…reaching out to someone once a day, a person you normally wouldn’t — like someone you typically sit next to, or your grandma — call your grandma. It’s those small interactions that can kind of make a normal day normal.”

When kids and parents are stuck at home together, mental health comes under the microscope, Walton says. She’s noticed a 75 percent increase in calls from parents following the stay-at-home order.

“I’ve talked with multiple parents now, who, you know, they’re seeing behaviors from their kids that they’re like, ‘I’m kind of realizing that this is actually indicative of a mental health need,’” Walton says. “…I’m excited for these kids because they’re finally probably going to get the services and support that they need.”For kids and parents who may need a mental health provider’s help for the first time, Thompson says many services — including diagnosis for clinical depression or anxiety — can be accessed virtually, with the help of a computer or cell phone.

People who think they may need those services should make calls to their insurance company and do some research on the providers in their network (or contact an organization offering free resources). Families can call individual schools to learn about virtual counseling services.

“It’s really important to feel comfortable with a therapist, so I would recommend talking with a therapist on the phone, and working with the therapist to decide what’s going to be best” before meeting online or in person, Thompson says.

“If the therapist is in a very big busy office with multiple people in the waiting room, then maybe video is better for right now,” she adds. “But if it’s a solo practice and there’s no one else in the office, then it might be reasonable [to meet physically]. However, even in those cases, right now videoconference is the safest.”

Because of the pandemic, people are talking more about mental health — often seen as a good thing.

But if a surge of people seek services at the same time, it may be more than the country’s already overburdened system can bear, warns Vincent Atchity, president and CEO of nonprofit advocacy organization Mental Health Colorado.

“There are people with serious mental illness, and serious substance use behaviors that are extremely harmful, [who] really need quality access to care,” Atchity says. “…It’s not been easy ever for those folks to get access to care, and if the system in coming months is increasingly overloaded by people who are suffering from some kind of a post-pandemic depressive disorder … that’s going to make it even worse for some of the folks with greater needs.”

Thus, from a big-picture point of view, it makes sense to try to promote ways the general public can maintain mental wellness that don’t necessarily involve seeking intensive care, he explains. But Atchity also worries about the pandemic’s long-term implications for young children’s social and emotional learning.

For younger kids, he points out, school isn’t necessarily as much about academics as it is about learning social skills, through art and music classes, physical education and even recess.

And though all kids will feel some level of impact socially, the economic and health costs of the coronavirus are anything but equal.

“We may see … a grievously divided kids’ population of those who’ve managed to kind of sail through this, because they’re comfortable at home and everything is hunky-dory in terms of the family’s economic stability,” Atchity says, “and those kids who are going to have all kinds of real traumatic stuff going on in the face of the disruption that their parents are experiencing.”