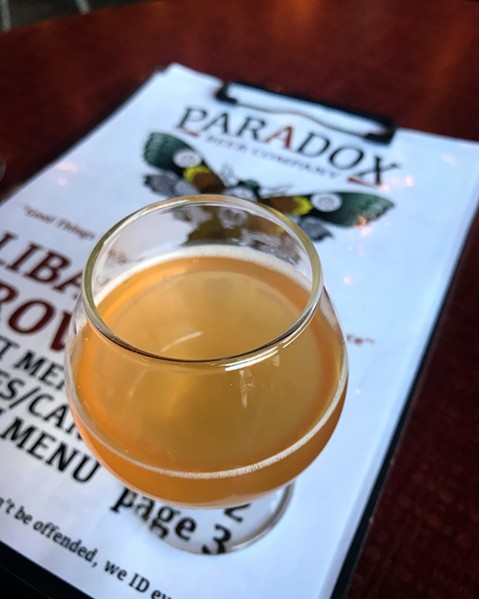 Brewer, blender, jack-of-all-trades employee Jeffrey Airman says there won’t be any brewing or aging at this satellite spot, that it’ll be a tap and tasting room with some live music offerings and a small kitchen for limited food service, supplemented by food trucks at times.

“You won’t be getting the full Paradox experience unless you come to Divide,” he says, “but we’ll do different productions for the Outpost and tailor the beer for the neighborhood.” For example, a collaboration with Cerberus Brewing Company’s already planned.

On our recent visit, we followed the advice of friends who said Paradox’s pineapple upside down cobbler IPA — a collaboration with Greeley’s Wiley Roots Brewing that’s soon to disappear if it’s not already gone — is a beer to behold. It’s made with caramelized pineapple, cherry juice, vanilla, cinnamon and lactose, leading with cake icing in the aroma yet magically manages not to taste cloying. A trusted friend who samples widely said it was probably the best beer she had in 2019, commending the pure flavors. We concur and were simply stunned. It’s a great example of Paradox’s prowess (with a little love from some friends, in this case).