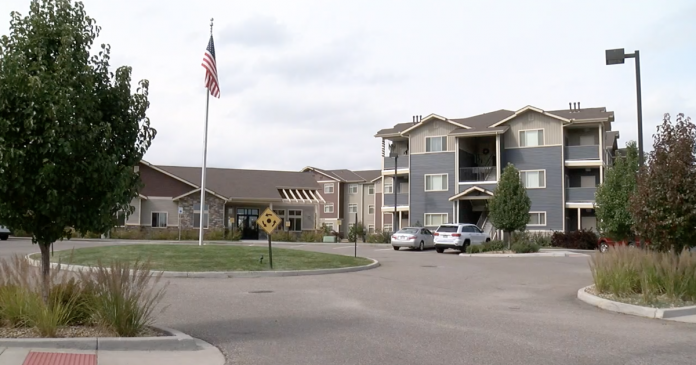 PARKER, Colo. — For Kaitlyn and Jesse Hall, the notice they received on their door at the Copper Steppe Apartments Monday evening was a shock.

“You shall within 10 days after this demand is served upon you either pay to the undersigned total due at the time you pay plus any additional late fees or move out and surrender possession of the premises,” Jesse Hall said.

For the Halls, who both work full-time jobs and have young children, the total due in back rent is more than $7,000 for their apartment at the Parker apartment complex. They say this is the first notice they ever received from the complex.

Back in April, they applied for the Emergency Rental Assistance Program, or ERA, after they both lost their jobs.

“We got jobs again and started working, started paying our rent again, and then we were just waiting for this processing for this back rent that’s due for these past few months,” Kaitlyn Hall said.

But time is of the essence. With just several days left until eviction, they feel they’re out of options.

“If you want me to make payments on my back rent, that’s fine. I’m not saying… I’m not going pay it, but I don’t have it all up front,” Kaitlyn Hall said.

Denver7 reached out to management at Copper Steppe several times, but it chose not to comment. It did confirm the eviction notices went out to 55 residents.

As for the Douglas County Housing Authority, which works with many people who live in this complex, they could not be reached and are at a statewide housing conference until Monday.

RELEATED: How to get eviction assistance in Colorado now that renter protections have ended

Douglas County officials said people who received an eviction notice and haven’t applied for ERA should do so quickly because there is still money available.

For those that have, assistance is still available up to $6,000. After that, it is up to a county committee to decide if a family is eligible for more.

Once Denver7 began questioning that short notice, both the apartment management and the DougCo Housing Authority began reaching out to the tenants assuring them they would work with them to help avoid any evictions.

There are also several non-profit organizations in DougCo, like The Rock Church, where families can call and discuss their situation.