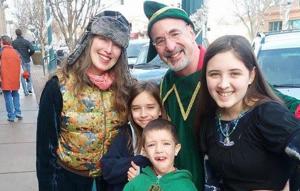 For the seventh year in a row, Colorado Springs city councilman and business owner Richard Skorman will be dressing as the “Parking Elf” who pays off downtown parking meters several days before Christmas.

Between 10 a.m. to 4 p.m. from Friday through Christmas Eve, drivers who park in the 300 block of North Tejon Street won’t have to worry about feeding the meter. Instead, the usual $1 per hour parking outside Poor Richard’s Books & Gifts, Rico’s Cafe & Wine Bar, Little Richard’s Toy Store and Poor Richard’s Restaurant will be free, thanks to Skorman the Parking Elf.

“People are so happy,” Skorman said, describing people’s reaction to seeing a man dressed as an elf, paying their meter. “It’s like you’re giving them a $100 bill.”

Those who miss seeing Skorman outside can request parking change inside the bookstore, he said.

Skorman, who co-owns the four businesses with his wife, Patricia Seator, said the little act of kindness often spreads. In past years, people have jumped in to help pay for even more meters, he said.

On Saturday, drivers also can get free parking at three of the city’s parking garages: the garage at East Bijou Street and North Cascade Avenue, 127 East Kiowa St. and 130 S. Nevada Ave.

Despite the recent announcement that city parking meter prices will be increasing next year, Skorman said he plans to bring the Parking Elf back again next holiday season. “I love doing it,” he said. “It’s a bit of a holiday gift to me because people are so appreciative and we like to say thank you for supporting us.”