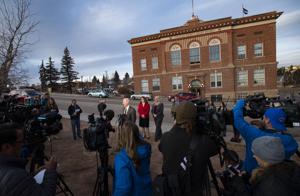 Frazee, 33, of Florissant, was sentenced to life without parole plus 156 years, as presiding District Judge Scott Sells condemned Berreth’s murder in a voice that cracked with emotion.

“Your actions were vicious, senseless, without reason or explanation,” Sells said, his lip quivering. “Kelsey spent her last night caring for you … and you beat her. You burned her body.”

Wearing a white button-up shirt, the defendant sat stone-faced as the verdicts were read. In the front row, Darrell Berreth, the victim’s father, nodded with each guilty verdict, as a relative placed a hand on his shoulder.

The verdict capped 10 days of testimony from more than 60 witnesses, who strung together more than 600 pieces of evidence showing that Frazee fatally beat Berreth in her townhouse before absconding with the body and burning it at his ranch.

Cellphone records and surveillance bolstered testimony by the prosecution’s star witness, Frazee’s former mistress, who related his grisly confession — and how he acknowledged the barbarity of Berreth’s death, saying, “It wasn’t humane.”

The rancher and farrier was convicted on all six counts, including tampering with a human body. The jury found he tried three times to solicit then-mistress Krystal Lee to kill Berreth before he took matters into his own hands, with a baseball bat.

Lee told the court that Frazee confessed to blindfolding Kelsey Berreth with a sweater before asking her to guess the scent of a scented candle. Then he hit her with a bat up to 15 times, until blood spattered across her walls and belongings, including a coffee maker, a family portrait, stuffed animals and a baby gate.

A partial human tooth found near a burn scar at Frazee’s ranch was among the evidence used to convict him.

Teller County sheriff’s deputies shielded Frazee from view as he was led away from the courthouse to a black sport-utility vehicle with tinted windows. “He’s a convicted murderer now!” one person in a gaggle of reporters called out.

Frazee’s mother, Sheila Frazee, walked straight to her SUV, staring through her windshield and pulling away without responding to requests for comment from a Gazette reporter at her driver’s side window.

In the hallway after sentencing, Jennifer Viehman, one of three prosecutors, wiped tears as a crowd swirled around her.

The victim’s mother, Cheryl Berreth, phoned in to Frazee’s sentencing, but opted not to speak. But in a searing letter to the court, she said Frazee’s crime robbed her family of a “devoted, caring mother,” and left the couple’s toddler daughter to “call out for mama in the middle of the night.”

“He not only killed our daughter — his child’s mother — but he chose a horrible death for her,” she said. Cheryl Berreth’s brother, who read the letter, choked up as he delivered her words.

The nationally watched case against Frazee went to the jury just after 11 a.m., following closing arguments that gave clashing perspectives on Frazee. Prosecutors painted him as a cold, calculating killer, while his attorneys called him the victim of a campaign of lies.

Prosecutors opened their presentation by showing surveillance footage of Berreth running errands on Thanksgiving Day, hours before she disappeared. She bought cider, flowers and ingredients to make sweet potatoes for the holiday — unaware of what authorities called Frazee’s “sick plot,” months in the making.

“While Kelsey Berreth is planning a future, the defendant — this man, this man — is plotting her death,”  said prosecutor Beth Reed, jabbing her finger toward Frazee at the defendant’s table during one of the prosecution’s two presentations.

Reed said he openly mused to friends and his mistress that if investigators couldn’t find a body, he couldn’t be charged with murder.

“No body, no crime. That’s what the defendant has been banking on for several months,” said Reed, quoting an alleged boast by Frazee. “The problem for him is evidence.”

The problem for the jury, the defense countered, was believing that Frazee would kill Berreth on Thanksgiving Day, when potential witnesses are legion.

Jurors who believe that Frazee is a murderer must also believe he’s an “idiot,” Steigerwald said.

“If it is your plan to murder someone, you don’t tell half the people you know,” Steigerwald said. “Patrick Frazee came off like a complete and total fool. That doesn’t make him guilty.”

The defense attacked DNA evidence as insufficient and called Lee a liar who invented a story to protect herself. They argued that Frazee’s letters to a fellow inmate at the Teller County jail — in which authorities say he sought to kill Lee and most of her relatives — did not prove he murdered Berreth.

Neither side discussed motive, leaving the “why” up the jury.

Prosecutors elicited testimony that Frazee was a beneficiary of Berreth’s life insurance policy through work. And he was strained by financial burdens, paying $700 a month in child support during an ongoing battle for a share of his inheritance after his father’s death. And he was in default on a $42,000 loan.

Prosecutors said Frazee also wanted full custody of his daughter, and that to him, Berreth was “a problem.”

Prosecutors opted in July not to pursue the death penalty against Frazee. On Monday, Cheryl Berreth said that while it would have been “well deserved,” her family did not ask for it because they wanted Frazee to seek forgiveness, citing their religious beliefs.

Even after the case against Frazee had concluded, his former mistress dominated the courtroom discussion and prosecutors’ remarks.

A guilty verdict in hand, 4th Judicial District Attorney Dan May acknowledged that Monday’s verdict would be different had Frazee’s mistress not cooperated. Even so, May said he was “not proud of” her plea deal, and that she deserves “every single day that she gets” in prison.

Lee pleaded guilty to evidence tampering, admitting that she cleaned up blood from the crime scene, helped burn Berreth’s body and took Berreth’s phone to Idaho in a bid to make it seem like she was still alive.

Lee faces up to three years in prison. Her sentencing date hasn’t been announced.

In her letter, Cheryl Berreth was among those who say Lee got off too easy.

“We have yet to see any remorse for anything other than being caught,” she said.

“She shouldn’t have received the plea deal that she did. She was an active participant in murder. The only thing she didn’t do was swing the bat.”

But she reserved her venom for Frazee.

“You need to take responsibility for your actions,” she said in her letter, before pivoting to the daughter he claims to love.

“Kaylee will suffer a lifetime because of your selfishness.”