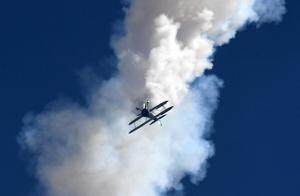 The Pikes Peak Regional Airshow returns to the Colorado Springs Airport this weekend for its first exhibition since 2019. First-time visitors who aren’t quite sure what to expect Saturday and Sunday, or how to prepare, can follow these tips provided by airshow organizers.

How does it work?

Airshows are comprised of two parts: performances and displays. There will be 10 performances in all, following the same schedule for both Saturday and Sunday. The first performance begins at noon with the national anthem and parachute jump and the last begins at 2:40 p.m.

Displays offer on-the-ground looks at aircrafts old and new. Visitors can peruse the displays until the event closes at 4 p.m.

“The performances are thrilling, but do take time to visit the displays, which include the latest in aviation technology and rare vintage aircraft and warbirds, along with demonstrations,” the airshow’s advice sheet reads.

The show takes place at the Colorado Springs Airport’s A/DACG facility at 7250 Getting Heights, located on the southwest section of the property.

Concessions feature a “huge variety of international food and beverage.” ATMs will also be on site, although most vendors take both cash and credit cards.

The planes and exhibitions

– The air show also will feature the U.S. Navy’s EA-18G Growler demonstration team and, for those who thought slapstick only worked on the ground, barnstorming exhibition pilot Kyle Franklin and his “Ben Whabnoski” comedy flight. A “KidZone” brings experiential activities focused on flight and aimed at inspiring interest in STEM education.

– The Commemorative Air Force’s Flying Fortress, Texas Raiders, was one of the last B-17’s having been built in July of 1945, it remained in service into the Korean War.

– The F-35A Lightning II is a stealthy, multirole, all-weather air-to-air and surface attack fighter. It will replace the U.S. Air Force’s aging fleet of F-16 Fighting Falcons and A-10 Thunderbolt II’s, which have been the primary fighter aircraft for more than 40 years, according to information provided by the airshow.

How should I prepare?

Those new to Colorado might not be acquainted with the sun’s extra-potent rays. Higher elevation leads to higher solar intensity. Put simply, sunscreen, hats and other sun-protective measures are essential since there are no indoor facilities. Leave the umbrellas at home, though, as a courtesy to others.

Ear protection is also encouraged for children and those sensitive to loud noises. Aircraft engines are loud and will continue to be so for the duration of the show.

Given the show’s location in an airfield, seating will not be provided. Visitors should bring their own chairs unless they prefer to stand.

Coolers, glass bottles and pets are not allowed at the event, nor are airborne drones, skateboards, bicycles or rollerblades. Weapons are also prohibited.

There is an uphill trek from the parking area to the aircraft. Visitors should plan ahead with wheelchairs or strollers for those who need them. Handicap transportation is not provided, but the ticketing and entry facility is built for handicap access.

“Above all,” the sheet reads, “relax, have fun, and be prepared to see rare aircraft flown by highly skilled pilots!”