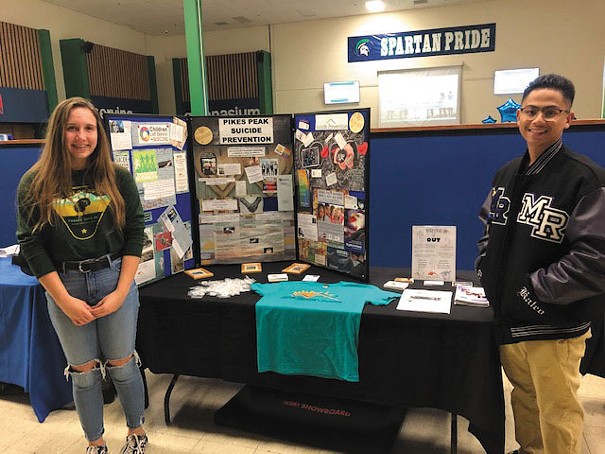 It’s the final word in Pikes Peak Suicide Prevention Partnership’s title that proves key to accomplishing its mission. Not only does this 25-year-old organization form collaborative partnerships with other mental health-focused nonprofits, services and individuals, but it very much counts its clients among its partners. Every program offered by PPSPP is influenced by client need.

“One thing I’m very proud about,” says executive director Cassandra Walton, “is that we have the ability to listen to what our clients say, and say, ‘OK, we’ll try to figure out how to do that.’ We don’t have any other agenda, any other mission statement that prevents us from doing that. It’s just, if we think it’s under the umbrella of suicide prevention, we’ll try to find a way to do it, so we’ve been able to offer a lot of creative programs.”

Walton, who volunteered with the organization for three years before becoming executive director this November, points to programs that have proven effective, such as the Children Left Behind by Suicide support group that offers children a place to talk about their lost loved ones and begin to heal from the trauma. It’s called “postvention” — intervening after a suicide to support the ones who have been affected — but Walton and board president Matt Thelen say it’s a form of prevention, too. People who have been affected by a suicide are more likely to attempt suicide themselves, so services like this reduce their risk.

But the organization intervenes at every stage of suicide prevention, offering support groups for teenagers and adults struggling with suicidal ideation, plus individual therapy, art workshops, community education panels, postvention at schools and workplaces, and more. The organization’s teen board is even working on a podcast, Having the Conversation, about teen suicide prevention. All of this PPSPP offers free of charge.

But no organization sticks around 25 years without evolving, and PPSPP plans to continue building partnerships, and increasing the effectiveness of their postvention tactics.

“So one of the things that we will be focusing on as part of the Colorado-National Collaborative [a federal and state partnership working to reduce suicide rates in Colorado] is the postvention piece and trying to create a more structured approach within the community for the different populations that exist,” she says, adding that a structured package of support services might look different for a military base that has suffered a suicide, versus a school. The goal is to have these packages ready, so postvention can be immediate.

“There’s so much guessing work with [postvention]. And so what happens is people get scared to do the wrong thing, and then they do nothing, which is equally as damaging,” Walton says.

For those who want to support their loved ones, support their community, or find support for themselves, PPSPP is here, and they plan to stick around another 25, 50, 100 years — as long as there is a need for their services.

“Even if you haven’t been personally affected by suicide,” says Thelen, “we’re the symbol that says suicide can be prevented. We’re doing it. We know that we’re saving lives, and anyone can be proud that Colorado Springs does that.”