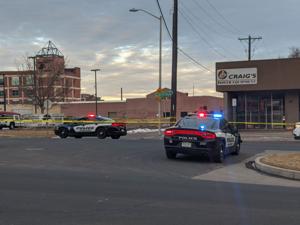 The first shooting happened about 10 a.m, at the Broadmoor Ridge Apartment Homes, 3893 Westmeadow Drive, where a man who’d been shot was found lying in the parking lot, said police spokesman Sgt. Jason Newton.

The victim, whose name was not released, was shot in the face and taken to a hospital with life-threatening injuries, he said.

While officers were investigating the shooting, a  carjacking was reported about a half mile away.

There are clothes laying on the ground in the apartment parking lot – police have taped off the entire surrounding area. @csgazette Possible shooting at the Broadmoor Ridge Apartment Homes pic.twitter.com/uxTGwzFRnj

A Dodge Journey with the license plate of 273-WKQ was reported stolen in the 3700 block of Penny Point, Newton said. Police are searching for a male suspect, he said.

“At this time we are investigating both scenes independently to determine if they are linked,” Newton said.

About 3:40 p.m., a second shooting and carjacking was reported at East Vermijo and South Wahsatch avenues, police said.

A male suspect walked down Wahsatch Avenue toward Costilla Street firing off rounds, shooting one driver in the face, Newton said. The victim was taken to a hospital with a nonlife-threatening wound and is expected to recover, he said.

The suspect continued to walk down Wahsatch, Newton said, where he carjacked a Buick LeSabre with a Colorado license plate of 350-VOM. The man pointed a gun at an employee of Apex Sports at 327 S. Weber Street, police said.

Police have not said if they believe the two shootings and car thefts are related.

“I would like to say there is (no danger to the public), but there is,” Newton said. He advised that if anyone recognizes the Buick LeSabre, to not approach it and call police.

“These things don’t occur very often, but it is unsettling that we have two today, so I totally understand that people are on edge.”

At the scene of a SECOND shooting & car-jacking in Colorado Springs today. Waiting to find out more from police @csgazette pic.twitter.com/82SGoiVTHu

Anyone with information regarding the shooting or the stolen Dodge were asked to call police at 719-444-7000.