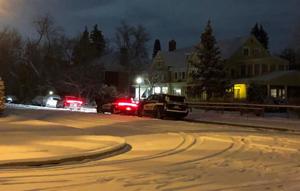 Police are investigating the death of a man who they believed stopped breathing after a fight early Tuesday inside an apartment near Colorado College.

Officers were called just after midnight about a disturbance and request for medical attention at the apartment in the 1300 block of Wood Avenue.

Despite receiving medical aid, the man died in the apartment, police said.

Police believe he was involved in a physical altercation with another man during a party in the apartment. After party guests separated the two, the man who died “appeared to have medical difficulties and then became unresponsive,” police said in a statement.

The homicide unit is investigating the death, which police have called “suspicious.” The El Paso County Coroner’s Office will determine the cause and manner of death.

No arrests have been made, though police have identified and contacted the people involved, according to the statement.