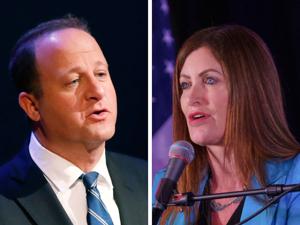 Colorado Gov. Jared Polis, the Democratic incumbent, and Heidi Ganahl, his Republican challenger, have each committed to appearing at three general election debates in September and October, their respective campaigns announced on Monday — but so far they’ve only both agreed to participate in one of them.

Ganahl initiated this year’s edition of the perennial debate over gubernatorial debates when her campaign announced Monday morning in a news release she is challenging Polis to three debates and specified the meetups she has decided to attend.

Less than a half hour later, Polis’ campaign issued its own list of the three debates he plans to attend, including two that aren’t on Ganahl’s list.

Both say they’ll face off on a date to be determined in October at a debate in Denver.

Other than that event, however, the two candidates have delivered RSVPs to different sponsoring organizations and news outlets.

Ganahl has OK’d the Sept. 10 debate at Western Slope advocacy group Club 20’s fall meeting in Grand Junction and a debate in late September or early October in Colorado Springs sponsored by The Gazette and KKTV.

Polis has accepted invitations to one debate sponsored by 9News, Colorado Politics and KRDO-TV, and another sponsored by The Denver Post, CBS4 Denver and Colorado Public Radio, with details pending. The debate they both so far agreed to attend is sponsored by CBS4 and the Colorado Sun.

Noting that Polis has only inked in televised debates set to be held in the Denver metro area, while two of the debates she’s agreed to attend will be held elsewhere in the state, Ganahl took to social media to denounce the incumbent.

Polis’ “refusal to debate in rural Colorado” and Colorado Springs, Ganahl tweeted, “makes his priorities clear. I will be a gov for ALL Coloradans. … Voters deserve real conversations on issues.”

Christian Reece, executive director of Club 20, told Colorado Politics she is disappointed Polis left the group off his list but hopes he reconsiders.

“We’re still hoping to work with their campaign to try to make that date work,” she said. “The reason we hold our debates so early in the season is to provide a nonpartisan platform for constituents of the region to hear the candidates’ stands on the critical issues of our area, which include water, public lands, agriculture, our forests, outdoor recreation — all of the economic drivers of our state.”

For more than three decades, the organization has held a full day of debates on the Saturday after Labor Day in what has long been considered the informal kick-off to Colorado’s general election campaign season. This year, the group plans to stream its program online.

Four years ago, Polis sparked sharp criticism when he became the first major party gubernatorial nominee to skip the Club 20 debate. After organizers declined Polis’ offer to send a surrogate, his 2018 Republican opponent, then-State Treasurer Walker Stapleton, had the stage to himself for a question-and-answer session with debate moderators.

Like this year, the Democrat’s campaign cited a scheduling conflict as its reason for passing on Cub 20’s event but declined to provide details.

When the popular former governor was mounting a successful run for the U.S. Senate two years ago, Democrat John Hickenlooper declined to attend the group’s debate, as did 3rd Congressional District candidates Lauren Boebert, the Republican, and Diane Mitsch Bush, the Democrat.

Both campaigns said it’s possible they could add more debate dates in coming weeks, while a Polis spokeswoman stressed that the governor is scheduling “additional forums ensuring this important discourse reaches voters in every corner of Colorado,” including one in Grand Junction in October.

“We look forward to highlighting the clear contrast between Heidi Ganahl’s concerningly conservative and out-of-touch message for voters and Gov. Polis’ strong record of leadership and delivering for the people of Colorado,” Polis campaign spokeswoman Amber Milers said in a statement. “Gov. Polis is focused on the issues that matter most to Coloradans and is ensuring our brightest days are ahead.”

Ganahl said in a statement she’s relishing the chance to go toe-to-toe with the incumbent.

“Now, more than ever before, the voters of Colorado deserve to hear where the potential leaders of their state stand on the issues that really affect them,” she said.

“This race will decide Colorado’s path forward, and voters have a real choice. Jared Polis must answer for the many failures of his administration, including our soaring crime rate, unaffordable cost of living, out of control gas prices, and an education system that is failing our children. I look forward to debating these issues with the governor and discussing my plan to unleash Colorado’s potential across the state in rural Colorado, Colorado Springs and Denver.”

Ganahl won the nomination to challenge Polis two weeks ago in the Republican primary by defeating Greg Lopez, the former mayor of Parker who finished third in the GOP’s 2018 gubernatorial primary.

Polis, a former five-term congressman from Boulder, is seeking a second term as governor.