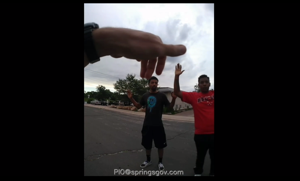 Colorado Gov. Jared Polis said he won’t order an independent investigation into the case of De’Von Bailey, who was fatally shot in the back as he fled from Colorado Springs police.

The decision comes about a week after a grand jury found the two officers justified when they shot Bailey on Aug. 3 after they stopped him on a report of an armed robbery.

The governor had called for an independent review of the shooting earlier, saying it would “maintain public trust and confidence,” but he stopped short of ordering Attorney General Phil Weiser to investigate the case.

“Now that the grand jury has concluded, the Governor wants to ensure that our state supports the Bailey family and the community as they heal and recover,” said Polis’ spokesman, Conor Cahill, in a statement.

Mari Newman, a lawyer for Bailey’s family, said she was disappointed. They had advocated for an outside agency to investigate the shooting to avoid a conflict of interest. Per protocol in El Paso County, the Sheriff’s Office and District Attorney’s Office investigate shootings involving Colorado Springs police officers.

“The overwhelming conflicts of interest within Colorado Springs law enforcement make it impossible for the community and the family to put any faith in the so-called ‘investigation’ that has occurred so far,” Newman said.

Now, it’s “up to the Bailey family and the community to work toward securing justice for De’Von,” she said.

Polis plans to work with lawmakers to examine how Colorado handles cases of officer-involved shootings and identify solutions “where we don’t compromise public safety and ensure that our communities are protected and have faith in law enforcement,” Cahill said.

Officers approached Bailey and his cousin, Lawrence Stoker, about a reported armed robbery and Bailey ran away as officers tried to search him. He was shot four times in the back after he refused repeated requests from the officers to raise his hands. Police say they found a gun in his shorts.

In court this week, prosecutors sought to tie Stoker to the alleged robbery that led to the 911 call spawning Bailey’s death as he ran from the officers. Witnesses claimed the alleged victim wasn’t robbed as he claimed.

On Thursday, a jury found Stoker not guilty of two counts of third-degree assault and one count of harassment, capping a three-day trial.