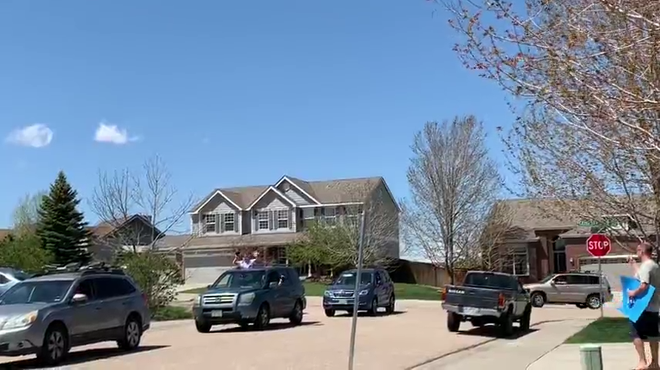 Graduates of Poudre School District high schools will be able to have a limited number of family members and guests at their postponed high school commencement ceremonies, district officials announced Tuesday.

The graduation ceremonies, postponed until July 23-25, were previously moved outdoors to French Field at Rocky Mountain High School, 1300 W. Swallow Road in Fort Collins, to allow for proper physical distancing among the participants.

Poudre School District officials originally said no spectators would be allowed. They modified those plans Tuesday, saying each student would be able to have a limited number of guests, sitting in assigned seats and required to wear masks or other cloth face coverings, at the ceremonies. Specific arrival times will be assigned to attendees to allow for social distancing, the district said. The number of guests allowed will vary by school, based on the size of the graduating class.

“I am delighted to announce what feels like the first good news in a long time,” PSD superintendent Sandra Smyser said in a news release. “Our PSD seniors deserve this moment in the spotlight more than ever, given everything that’s happened, and we can’t wait to see them walk across that stage.”

The Larimer County Department of Health and Environment granted a variance to its coronavirus restrictions on large group gatherings after working closely with the school district on safety procedures.

Graduates will need to pick up a packet in mid-July with detailed information, as well as a school mask for the graduate to wear at the ceremony, guest tickets and a ceremony program. Individual schools will communicate additional details about the packet pick-up.

Each ceremony will be live-streamed in both English and Spanish on YouTube, so additional family members and friends can watch either in real time or recordings later. Links to the livestream videos will be shared at a later date, PSD said.

The ceremonies for the district’s 1,800 high school graduates were originally scheduled for May 21-23, with the four largest schools at Colorado State University’s Moby Arena.

*Evening ceremonies for small graduating classes are being held indoors because of the unpredictability of Colorado’s summer weather, school district officials said.

Coloradoan reporter Kelly Lyell can be reached by email at kellylyell@coloradoan.com. You also can follow him on Twitter @KellyLyell and Facebook at www.facebook.com/KellyLyell.news. Help support Coloradoan journalists by purchasing a subscription today.