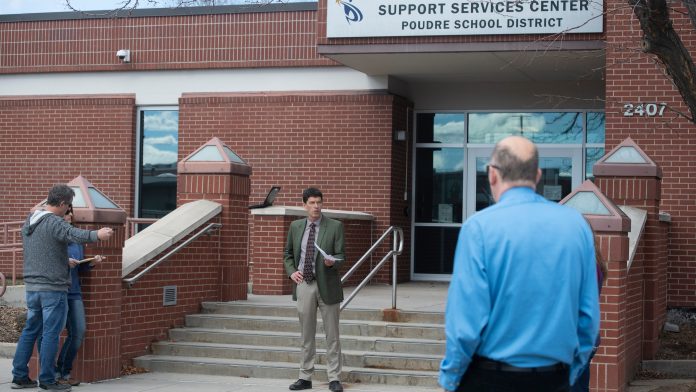 Poudre School District’s board of education announced its slate of three finalists for its open superintendent position at a special meeting Monday evening.

The finalists, all external candidates currently serving as a superintendent or director of schools around the country, are Jonathan Cooper, Brian Kingsley and Heather Sanchez.

There were 28 candidates for the position and the board, with the help of search firm Hazard, Young, Attea & Associates, narrowed the slate to three.

“We feel like we have a community treasure here at PSD and we want to keep pushing and striving for the highest level of excellence,” board president Christophe Febvre said. “And we want a candidate that does that for us. That helps lead us in that direction moving forward.”

Febvre said the board is looking for a good communicator who builds trust, engages with the staff and community, has strong strategic vision and prioritizes equity, diversity and inclusion.

Former superintendent Sandra Smyser left the district in January after she and PSD agreed to a $560,000 early retirement package.

PSD’s community and staff have opportunities to get involved in the search this week.

On Thursday and Friday, PSD is hosting staff and community forums, respectively, with the superintendent finalists. On April 6, the finalists will visit the district in person and meet with board members, but that evening there will be another public event at which members of the community can ask questions and finalists will give presentations on their visions for the district. For links to these events, visit PSD’s superintendent search page at psdschools.org/PSDSuperintendentSearch.

Until then, here’s what we know about the finalists.

Cooper is the superintendent of Mason City Schools in Warren County, Ohio; he is the only finalist who has been a superintendent. His current district — comprised of just five schools, compared to PSD’s 52 — is ranked a top-10 high-achieving district in the state.

PSD called him an “innovative and instructional leader” and said he has a history of “bringing people together through clear, transparent, and consistent communication.”

Cooper recently found himself on the national stage as an outspoken advocate for relaxing COVID-19 student quarantine rules and keeping students in schools, often citing mental health concerns. His district participated in a quarantine study that allowed exposed students to avoid quarantine for 14 days if they rapid-tested negative after exposure; this option was later offered to all students in the district.

His district made news late last year when the Cincinnati Enquirer reported it saw 15 students hospitalized for suicidal ideation in just three weeks. Months before, through a partnership with the Cincinnati Children’s Hospital system, Cooper had a mental health therapist employed in every school for the year to assist with the negative mental health affects of COVID-19.

Before he led Mason City Schools, Cooper worked as the district’s chief innovation officer. In that role, he founded Mason Innovation Week in conjunction with the city’s leadership team and Festo USA, a local pneumatic and electrical automation technology company.

Cooper earned a bachelor’s of education with a concentration in science from Ball State University, a master’s of science in educational leadership from the University of Dayton and is currently enrolled in the Ed.D. Program at Miami University (Ohio).

Kingsley is the chief academic officer of Charlotte-Mecklenburg Schools, one of the 20 largest school systems in the country, in Charlotte, North Carolina. PSD said his academic tenure can be “characterized by a deep commitment to identify and close racial and economic opportunity and achievement gaps for students.”

Kingsley’s current district faced some financial trouble earlier this year when it announced it would close 60 after-school programs and lay off more than 200 employees. WFAE, a North Carolina radio station, reported the district was able to spare the programs and most of the jobs as student enrollment increased and made up enough of the deficit to keep things open through the school year.

In the past he has served in assistant superintendent schools in a different North Carolina district and as chief academic officer in Broward County, Florida; in both roles he was credited with significantly raising graduation rates. In his other North Carolina role he was credited with significantly closing the opportunity gap “for students of color in advanced placement courses.”

Sanchez is the executive director of schools for the Bellevue School District in Bellevue, Washington.

PSD said Sanchez “is passionate about celebrating cultural and linguistic diversity and in ensuring that all students have the opportunity to experience a rigorous and enriching school experience.”

She previously worked as her district’s director of accelerated programs, choice and innovation, a position in which her focus was to improve access to outcomes for K-12 programs like gifted programs, advanced placement, choice schools and early college in high schools.

Testing:Colorado was granted a federal waiver for CMAS testing. Here’s what is still required.

She was recently named a finalist in Blaine County’s superintendent search in Hailey, Idaho, but was ultimately not selected.

Editor’s note: The Coloradoan was unable to obtain a photo of Heather Sanchez as of its 4 p.m. print deadline.