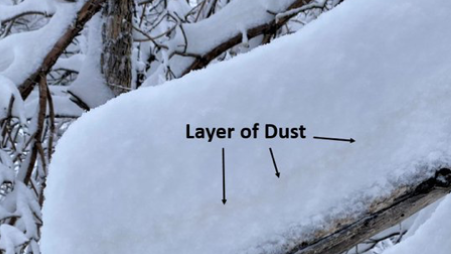 This summer it was ash from the Colorado wildfires and wildfire smoke from as far away as California descending on Fort Collins.

And now we have dust from Mexico dropping on us.

The weekend snowstorm didn’t just drop around 20 inches of snow on the city. Within that snow was dust drawn up from Mexico.

The National Weather Service in Boulder said people started seeing a brownish layer in the dense snow. The weather service captured a photo of the layer at its office and posted the image on its Twitter page.

The National Weather Service office in Albuquerque, New Mexico, sent a tweet saying it picked up in satellite imagery dust from the playas in Mexico being transported as far as Colorado.

The dust was sucked up by the powerful low pressure that lumbered along the Colorado-New Mexico border and pumped large amounts of moisture from the Gulf of Mexico.

High winds in southern New Mexico and northern Mexico sent dust particles aloft that was picked up by the low. When the low started moving east, the dust particles joined the moisture train into Colorado.

Storm cleanup: Here is when your street will be plowed

The satellite imagery that allows the dust to be picked up is produced at Colorado State University.

Matt Rogers, a CSU research associate in the Cooperative Institute for Research in the Atmosphere, said the institute produces a lot of the satellite imagery used by the National Weather Service in its forecasting.

“This product uses different colors of infrared light to detect the dust from the clouds,” he said.

The dust showed up as pink on the imagery. Other such detection allows large flocks of birds to show up on weather service imagery.

Some snow on trees is also showing discoloration in Fort Collins.

City Forester Kendra Boot said it could be a combination of three things: It could be from dirt and dust blown into the snow from the windy conditions. Some might be from the wind whipping up particulate matter remaining in the city from this summer’s wildfires. And some of it can be attributed to tannins from dead tree bark leeching into snow on the trees.