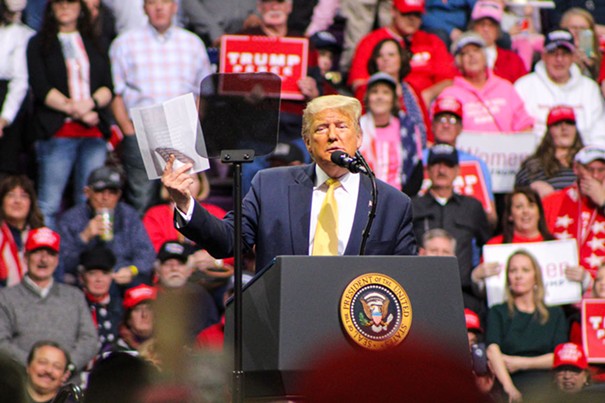 Back in 2016, he made three stops here while campaigning for his first term in the White House. While Hillary Clinton won Colorado’s popular vote by nearly 3 percentage points, Trump won El Paso County by a landslide — taking 56.2 percent of the vote, while Clinton got just 33.9 percent.

So, it’s not particularly surprising that he drew far more people to The Broadmoor World Arena on Feb. 20 than the 8,500 or so attendees the venue can seat. Some people were camped out for days ahead of the rally, according to media reports. Hundreds of others waited outside the arena for hours in hopes of getting a seat.

At 9:27 a.m. — eight hours before Trump came onstage — the Colorado Springs Police Department announced on Twitter that the arena’s parking lot was full.

The rally was a key opportunity for Trump to drum up support for Republican Sen. Cory Gardner, whom Trump declared was “with us 100 percent.”

“There’s no waver from Cory,” Trump said soon after stepping out to his legions of fans, a sea of red “Make America Great Again” hats and patriotic apparel. “We appreciate you. Thank you, Cory.”

Several hundred protestors make a stand at the anti-Trump rally

The race for Gardner’s seat is one of the most closely watched Senate races in the country, given Colorado’s Democratic leanings. Democrats see defeating Gardner as a step toward gaining the majority in the Senate, while Republicans know keeping Gardner in Congress is crucial to maintaining their ability to stop Democratic priorities from becoming law.

An August poll by Emerson College Polling showed former Gov. John Hickenlooper, a Democrat, beating Gardner by 13 percentage points in the Senate race. The poll was conducted a few days before Hickenlooper officially declared his candidacy — since then, he’s come under a barrage of attacks from other candidates labeling themselves as more progressive.

At the rally, the speakers sought to portray the somewhat unpopular Republican senator as completely in step with the president, though the two have had their disagreements over the years.

Gardner votes in line with Trump’s positions about 90 percent of the time, according to polling website FiveThirtyEight.

“Colorado, you all deserve to know that none of that would have been possible without the strong support of Sen. Cory Gardner,” Pence said. “So right after you get done voting to give President Trump four more years, we need Colorado to vote to give six more years to Sen. Cory Gardner.”

Colorado Public Radio reports that a VIP reception planned ahead of the rally cost $2,800 a ticket ($25,000 for people who wanted a photo with Trump). The event was hosted by a joint fundraising committee composed of Trump and Gardner’s campaigns along with the Republican National Committee.

“Our economy is roaring because of the policies this president and Congress have delivered for the American people,” Gardner said at the rally.

“These things don’t just happen,” Gardner said. “The BLM doesn’t just move to Grand Junction. Federal dollars don’t just come to Colorado because there are no other priorities. This takes hard work — this takes partnership.”

While some pundits anticipated that Trump would announce Colorado Springs as the permanent location of U.S. Space Command, operating from Schriever and Peterson Air Force bases, that news didn’t come at the rally.

“I will be making a big decision for [Space Command] as to where it’s going to be located,” Trump demurred. “I’ll be making that decision toward the end of the year.” The Colorado Springs Chamber & EDC recently launched a large-scale public relations campaign aimed at keeping U.S. Space Command in Colorado. Their efforts included printing T-shirts branded with the message “#usspaceCOm” for members to wear to Trump’s rally, and they’re encouraging people to use that same hashtag on social media.

“We know that President Trump and his team can make an informed decision in the best interest of national security when they become more familiar with Colorado’s aerospace and defense assets and robust workforce development activity,” Reggie Ash, chief defense development officer for the Chamber & EDC, said in a Feb. 18 statement announcing the campaign’s launch.

During his speech, Trump often returned to familiar talking points that have proved popular with his base, including job growth and low unemployment under his administration.

“The average unemployment rate for my administration is the lowest for any United States president in the history of our country,” he said, which is true. The average unemployment rate of 4 percent under Trump’s tenure is lower than that of any other president, including Lyndon B. Johnson (4.2 percent), according to The New York Times. Other speakers cited tax cuts under the Tax Cuts and Jobs Act of 2017, which led to income tax reductions for most individual tax brackets and for corporations. “We’re supporting working families by fighting for paid family leave and getting it, reducing the cost of child care and giving 40 million American families an average of $2,200 in their pockets directly thanks to the Republican child tax credit,” Trump said, to cheers.

Trump became the first Republican to call for paid family leave legislation in his State of the Union address this year. The bipartisan bill Trump supports for paid leave would allow parents to collect a portion of their child tax credits early and receive a smaller credit for the next 10 to 15 years — legislation that progressives feel doesn’t go far enough because it doesn’t provide new funding to cover family-related time off from work.

Both Pence and Trump praised the replacement of the North American Free Trade Agreement, or NAFTA, with the updated United States-Mexico-Canada Trade Agreement, as well as tariffs on Chinese imports.

“We’re reversing decades of calamitous trade policies. America lost one in four manufacturing jobs following the twin disasters of NAFTA and China’s entrance into the WTO [World Trade Organization],” Trump said. (Worth noting: Some economists would place more blame for lost jobs on automation than on global trade agreements.) “But under this administration, all of that is changing. The era of economic surrender is over.”

When he wasn’t talking about the strong economy, Trump took every opportunity to taunt Democrats and “fake news.”

Among Democratic presidential candidates, much of his ire was focused on former New York City Mayor Mike Bloomberg, whom he nicknamed “Mini Mike.”

“Mini Mike didn’t do well last night,” Trump said, referring to the Democratic debate televised Feb. 19 on MSNBC. “I was going to send him a note saying: ‘It’s not easy doing what I do, is it?’”

Trump also had thoughts on Minnesota Sen. Amy Klobuchar and South Bend Mayor Pete Buttigieg, saying Klobuchar’s debate performance was “the end of her campaign, in my book” and referring to Buttigieg as “Alfred E. Neuman,” the cartoon mascot often seen in the satirical Mad magazine.

There was a jab at former Democratic presidential candidate Hillary Clinton, and one at 17-year-old climate activist Greta Thunberg, Time magazine’s 2019 Person of the Year and a frequent target of conservatives.

“This year I got beaten out by Greta [for Person of the Year]. You know Greta?” Trump said as the crowd booed.

The president took up around 20 minutes criticizing Neil Cavuto, a Fox News personality who had invited A.B. Stoddard, the associate editor of RealClearPolitics, on his show earlier the day of the rally. Stoddard said Trump had “disastrous debate performances,” suggesting that Bloomberg’s poor debate performance didn’t rule out his presidential chances.

At the rally, Trump repeatedly insulted Cavuto and Stoddard, and he read off a series of random polls that purportedly showed television viewers had, in fact, approved of his performances in the 2016 presidential debates. He also expressed his disapproval over Parasite winning the Academy Award for Best Picture (“What the hell was that about?”), lamenting that it should have been an American film like Gone With the Wind.

Digressions aside, the overarching message to Trump’s supporters was clear: Give Trump another four years in the White House and keep Cory Gardner around Washington, too.

The speakers also sought to make the Democratic party synonymous with socialism.

“Colorado saw through Trump’s corruption and divisive agenda in 2016, and the fact that Gardner thinks that we would support Trump after all his assaults on our Colorado way of life shows just how out of touch Gardner is with our state,” Colorado Democratic Party Chair Morgan Carroll said in the statement. “… Colorado will show Trump and Gardner the door this November.”

State Rep. Marc Snyder, a Democrat from Colorado Springs, cautioned that “Trump has a long list of broken promises and bad policies that have hurt working people.”

“I look forward to November when we can vote both Trump and Gardner out of office, and elect a new President and U.S. Senator who will put hardworking Colorado families first,” Snyder said in the statement.

U.S. Rep. Joe Neguse, a Democrat from Boulder, pointed out Trump’s latest proposed cuts to Medicare, Medicaid and Social Security programs. “Just last week — after handing a $1.5 trillion tax break to the wealthiest in our nation — the president put vital programs on the chopping block that Coloradans rely on,” Neguse said,  referring to tax cuts passed as part of the 2017 tax legislation. Freshman Rep. Neguse took part in House Judiciary Committee questioning during the chamber’s impeachment of Trump last year, in an inquiry that centered on the withholding of military funds to Ukraine while Trump associates urged the Ukrainian government to investigate the son of Democratic presidential candidate Joe Biden.

Speaking of impeachment, Pence declared the Senate’s subsequent acquittal had “cleared our president of all charges” from the U.S. House’s vote to impeach Trump based on abuse of power and obstruction of justice.

Neither the impeachment proceedings, nor the acquittal, appeared to significantly affect Trump’s approval rating — which has hovered between 40 and 45 percent since October, according to FiveThirtyEight.