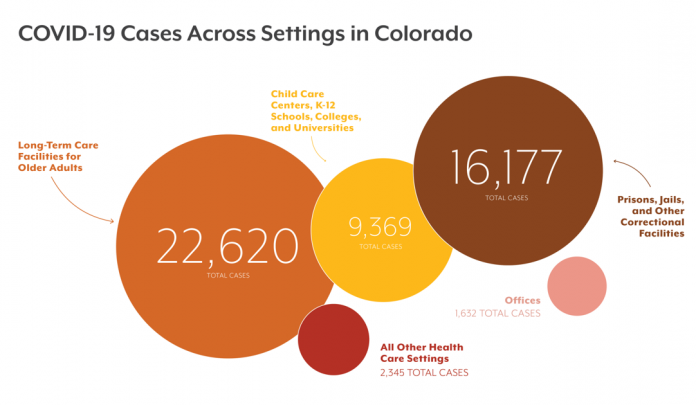 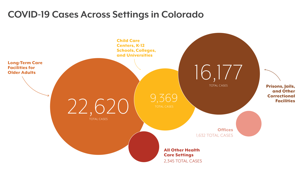 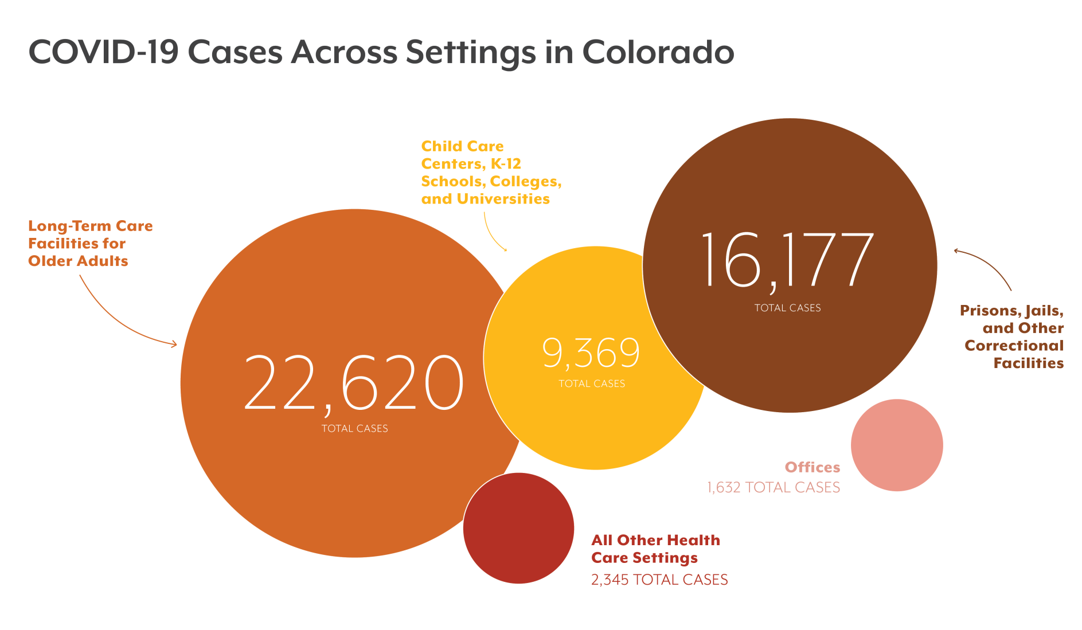 Outbreaks at prisons, jails and other correctional facilities across Colorado account for one in every 24 cases of COVID-19 in the state, according to a recent study by the Colorado Health Institute.

The study comes as inmates remain excluded from the state’s priority list for vaccines, despite federal guidance and other states that prioritizes prisoners the same as others living in shared and congregate housing.

Inmates who are older and have underlying health conditions that may put them at higher risk for the virus can receive vaccines at the same time as the general public, though right now, only prisoners who are 70 years or older are eligible.

“The choices we are making about how to prioritize vaccinations speak to how we value health equity in ways beyond rhetoric,” Michele Lueck, president and CEO of Colorado Health Institute, said in a statement.

Of the 16,177 coronavirus cases reported at Colorado correctional facilities, 2,300 have been among staff and 13,827 have been inmates, the study found. Fifteen of the 20 largest outbreaks in Colorado have been in prisons and jails, including at El Paso County jail, where nearly 900 inmates became infected in early November.

When to vaccinate inmates has remained a controversy in Colorado.

While the vaccination plan does not prioritize inmates, a previous version did, the Colorado Institute of Health said.

Those living in congregate housing, which included prisoners, were placed at the beginning of Phase 2, after Colorado’s “critical workforce” and residents of long-term care facilities, but ahead of other adults, people with medical conditions and the general public, the Institute reported.

The governor reportedly pivoted after an editorial ran in The Denver Post criticizing the plan, according to the Colorado Health Institute.

In a December news conference, Polis said, “There’s no way (the vaccine is) going to go to prisoners before it goes to the people who haven’t committed any crime,” and added that the proposed plan would be amended. His office later clarified that inmates who fell into a priority group, such as those over 70 or people with a high-risk medical condition, would be eligible to receive the vaccine at the same time as the general public, the institute said.

But inmates and advocates argue they should be among the first to get vaccinated, citing the close quarters inside jails and prisons and the inability to follow CDC guidelines of social distancing.

“People in shared and congregate living situations, such as long-term care facilities, homeless shelters and prisons and jails, are particularly susceptible to the way COVID spread and should be prioritized for vaccinations,” said Karen McNeil-Miller, president and CEO of The Colorado Health Foundation. “By protecting all of our correctional front-line workers, along with anyone in custody, we better protect Coloradans and their communities from this pandemic.”

In Colorado, 8,192 state prison inmates have been infected with COVID-19 and 27 have died, according to the latest data on the Colorado Department of Corrections’ website.

In El Paso County, 1,051 inmates and 115 staff at the county’s jail have tested positive since October, when the Colorado Department of Public Health and Environment determined there was an outbreak. The outbreak came months after a 41-year-old deputy died of complications from the illness.

Nationwide, an estimated 20% of all inmates in state and federal prisons have been infected, according to a recent analysis by the Associated Press and the Marshall Project. That’s more than four times as high as the general population. At least 275,000 prisoners have been infected and more than 1,7000 have died, the report found.

The American Medical Association is among those calling for vaccines to be given to inmates and employees in jails, prisons and detention centers. The Johns Hopkins Center for Health Security placed inmates as a priority group in its proposed framework for vaccine distribution.

Colorado is one of 10 states, including Alaska, Arkansas, Florida, Michigan, Oregon, South Carolina, South Dakota, Texas and Wisconsin, that have not addressed incarcerated people in their vaccine distribution plans, according to a recent analysis from the Prison Policy Initiative.