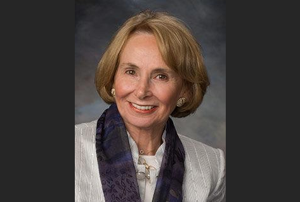 Joyce Schuck, a prominent activist for education, the homeless and disadvantaged, died Monday morning at her home in Colorado Springs. She was 82.

Described in an obituary written by her family as an “extraordinary woman, beautiful in many ways, and bordering on being renaissance,” Joyce grew up in Lawrence, a Long Island suburb of New York City, and married Steve in 1958. The couple moved to Colorado Springs in 1961 with their infant son, Bill, and welcomed son Tom shortly after. Their daughter, Ann, was born seven years later.

In Colorado, Joyce defied societal expectations of the time and quickly took active leadership roles in the Colorado Springs and metro Denver communities.

“Women in her generation were mostly homemakers, dedicated to supporting their husbands. But that, while important, was never enough for Joyce,” the family’s obituary reads.

While raising her family, Joyce graduated from Loretto Heights College in Denver in 1982 with a degree in social work. In both her professional and volunteer endeavors, her focus was on troubled teenagers, the homeless and the disadvantaged.

To that end, she co-founded several local organizations, including Community Transitions in Colorado Springs and Colorado Military Academy, the state’s first military charter school, of which she is still the board chairwoman. In 2000, Joyce and Steve also began Parents Challenge to address needs in Colorado Springs’ most ailing school districts and empower low-income parents with information and financial resources to choose the best schools for their children.

Additionally, Joyce took leadership roles with several local organizations, including serving as chairwoman of the Youth Transformation Center, vice chairwoman of the Colorado Charter School Institute, vice president of the Community Council of the Pikes Peak Region, and as vice president of the Women’s Foundation of Colorado in Denver. She also served on the board of the League of Charter Schools.

She helped design programs for Pikes Peak Community College, established a volunteer program for the 4th Judicial District Attorney’s Office, helped build El Paso County’s Shape Up initiative, and was also a member of the Junior League of Colorado Springs.

She authored her 1991 book, “Political Wives, Veiled Lives,” about the firsthand travails of the campaign trail she experienced while Steve sought the Republican nomination for Colorado governor in 1986. In it, she “presented the startling and often unsettling views of political wives, who share a difficult position and tenuous status in the world of politics,” according to her biography on the Schuck Communities website.

Joyce won many awards in her lifetime, including the Colorado Springs Mayor’s Award for Civic Leadership.

In addition to her husband, Joyce is survived by sons Bill Shuck and Tom Schuck, daughter Ann Schuck, eight grandchildren and five great-grandchildren.

Per Joyce’s wishes, her family announced there will be no formal service. Those who wish to honor her are asked to donate to Parents Challenge, Youth Transformation Center, Colorado Military Academy, the Humane Society or to any charity.

Frank Macon, one of last surviving Tuskegee Airmen in Colorado, dies at 97